Akira Yoshino talks with reporters in Tokyo after winning the Nobel Prize in chemistry on Oct. 9. (Photo by Kento Awashima)

TOKYO -- The 2019 Nobel Prize in chemistry has been awarded to Japanese researcher Akira Yoshino and American researchers John B. Goodenough and M. Stanley Whittingham for their development of lithium-ion batteries, helping to create a "rechargeable world," the Royal Swedish Academy of Sciences said Wednesday.

The technology has allowed for the creation of compact yet powerful batteries that are crucial to many modern innovations, including smartphones and electric vehicles, and could become the key to broader adoption of renewable energy.

Yoshino, 71, is the 27th Japanese-born Nobel laureate, following Tasuku Honjo of Kyoto University, who won the Nobel Prize in physiology or medicine last year for his work on cancer immunotherapy.

"Without doing a lot of unproductive things, you can't create anything new," Yoshino told Nikkei. "You have to work hard to discover new phenomena based on your own curiosity."

Yoshino is the eighth Japanese winner of the chemistry prize, joining a list that includes 2010 laureates Ei-ichi Negishi and Akira Suzuki.

Yoshino, an honorary fellow at Japanese chemical company Asahi Kasei, is the first Japanese laureate in a scientific field to come from outside academia since Koichi Tanaka, a fellow at instruments maker Shimadzu, won the chemistry prize in 2002.

"I'm delighted that the prize was awarded for lithium-ion batteries," Yoshino told reporters Wednesday. "There are young researchers trying hard in a variety of fields. I think this will encourage them."

Whittingham, a distinguished professor at Binghamton University in New York, developed the first functional lithium-ion battery in the early 1970s. The 97-year-old Goodenough, now a professor at the University of Texas at Austin, more than doubled the power of this design by using a cathode made from cobalt oxide with lithium ions. He published this discovery in 1980. 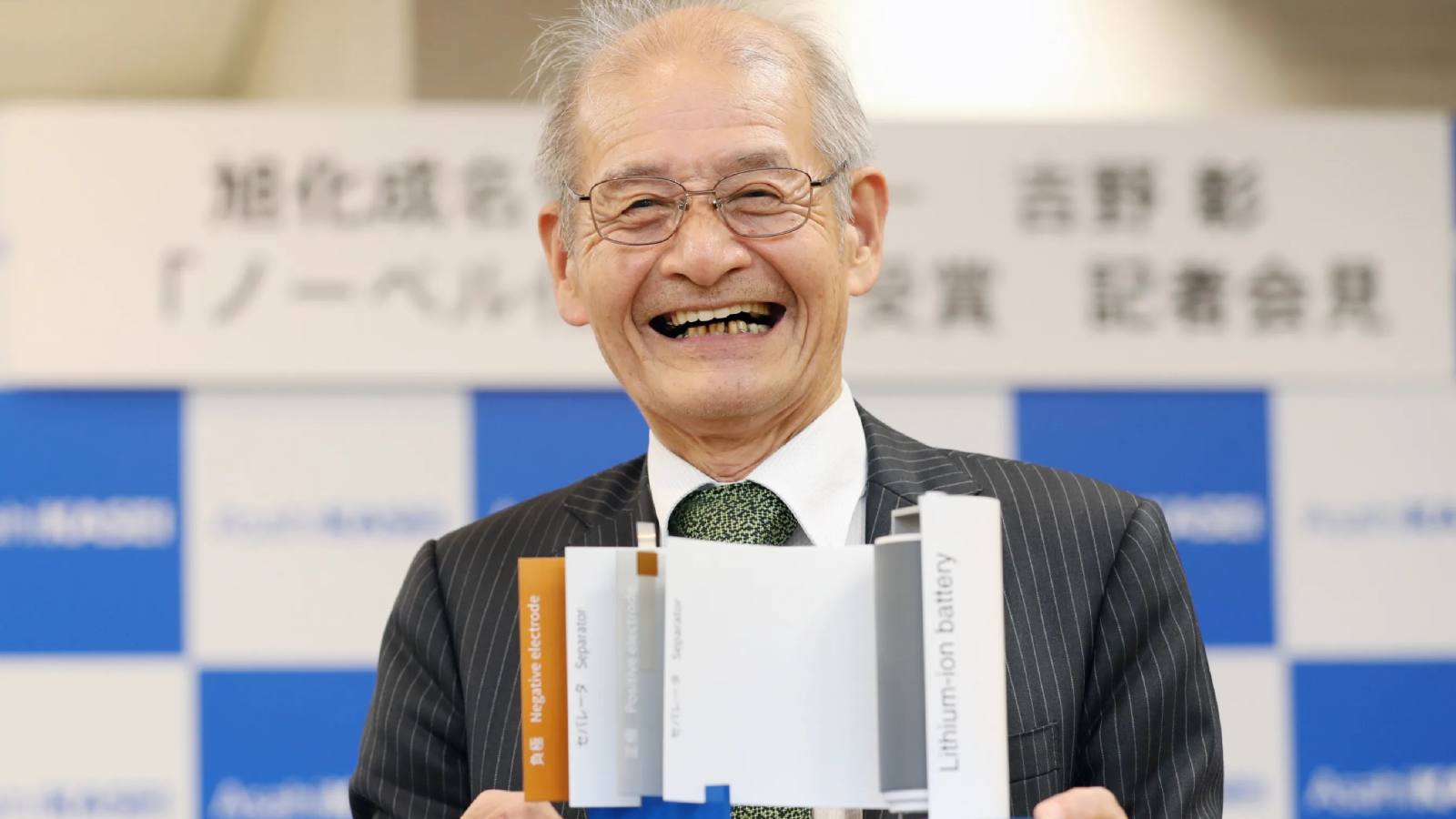 Nobel laureate Yoshino created the rechargeable world we live in

Yoshino built on this foundation to create a commercially viable prototype. He replaced Whittingham's anode -- which contained highly flammable metallic lithium -- with one based on lithium ions in petroleum coke, a coal-like byproduct of oil refining.

After developing the basic structure of the battery, including a separator to keep the cathode and anode from coming into contact and short-circuiting, Yoshino applied for a patent in 1985.

Lithium-ion batteries were commercialized in 1991 by Sony, for which they became an era-defining technology, powering devices such as notebook computers and mobile phones.

Since then, the batteries have become a keystone of modern telecommunications along with the development of the internet, and they enabled access to wireless communications even in developing economies lacking infrastructure.

The technology also has catalyzed a transformation in the auto industry with the rise of electric vehicles and hybrids. Global demand for these vehicles is growing as countries strengthen environmental regulations.

As their performance improved, lithium-ion batteries began to be used for storing energy from unreliable sources, such as solar, allowing supply to be adjusted to meet demand. Hopes are high that this will encourage wider use of renewables.

Japanese companies continue to play prominent roles in the market for lithium-ion batteries, with Panasonic establishing itself as a leading producer and Asahi Kasei and Toray Industries becoming major suppliers of materials.

A quarter-century after lithium-ion batteries hit the market, they have yet to be supplanted by something better, and demand keeps growing. Japanese research firm Fuji Keizai sees the market expanding 130% from 2017 levels to 7.39 trillion yen ($69 billion) in 2022.

The Nobel award ceremony will be held Dec. 10 in Stockholm. The 9 million Swedish krona ($907,000) prize will be split evenly among the three recipients.