TOKYO -- Food companies are watching with keen interest as researchers in Japan delve into the nuts and bolts of sensations like "crispness" and "springiness." Their findings are expected to lead to new and more appetizing products.

Taste, aroma and appearance are important factors in determining the appeal of foods, but the finer details of the dining experience are still little understood. The researchers are working to uncover the secrets of food texture by gathering data on "mouthfeel" and the microstructures of various ingredients.

Takashi Nakamura, a professor at Meiji University in Tokyo, is conducting studies on the springy textures of various kinds of starch.

Each type has its own characteristics. Tapioca, commonly found in bead-shaped form in Asian milk tea drinks, and "waxy cornstarch," used as a thickener in Japanese sweets, are different forms of starch. Their chewiness is similar, but the "waxy" form is easier to bite through, while tapioca has greater elasticity. The experience of eating them is filtered through the senses, so formulating a numerical index presents a challenge. 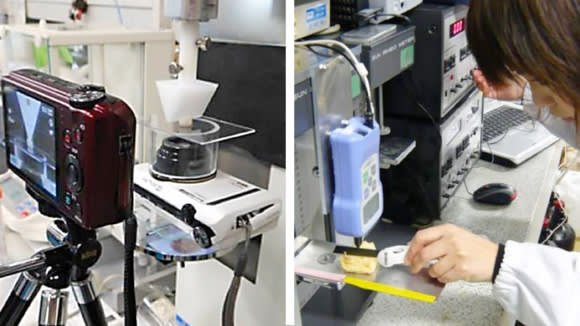 Nakamura's team used a triangular tooth-shaped utensil to investigate how each starch variety changed shape depending on the amount of pressure applied. The researchers slowly increased the pressure on identically shaped pieces of each ingredient and recorded the levels at which they were cut through or deformed to wrap around the utensil. They discovered that tapioca starch did not collapse, even under stronger pressure than that applied to the waxy variety, and instead deformed to accommodate the tool.

Tapioca scored consistently higher than waxy starch in hikikomi or "retraction rate," which expresses a sample's ability to flex in response to pressure, as well as the difficulty of cutting through it. Tapioca "stands up under strong pressure, and from this we can say that a high hikikomi is the key to producing a springy texture," Nakamura said.

Other researchers are tackling sound. Takahisa Nishizu at Gifu University studies the sound emitted when food is bitten into. His team created a device that measures the vibrations a cutting tool creates as it slices into tempura.

One can hear the sharp sound emitted when biting into a cracker, but the sensations one gets from crackling tempura owe more to the vibrations traveling from the mouth through the jaw and skull. Researchers are looking more closely at the frequency and shape of the waveforms produced.

Tempura quickly loses its crispiness after it is fried. Comparing sound vibrations between just-fried tempura and a half-hour-old batch, the team found that minute changes, inaudible without equipment, were related to crispiness. "We want to home in on what is actually happening by capturing the vibrations emitted at the moment of the bite," Nishizu said.

The Gifu University researchers have also developed a proprietary method, using a device attached to the tooth, to measure vibrations. It can be used on other kinds of foods -- crispy sweets, for instance -- and the researchers plan to continue the experiments.

Food texture research began in earnest in the 1970s in Japan, but without a standard research method it was difficult to properly analyze ingredients. The National Agriculture and Food Research Organization's Fumiyo Hayakawa was responsible for a turning point in 2013, when she collected and systematically organized words for describing food texture.

Selecting 445 Japanese words such as tsuru (slick) and motchiri (soft, elastic texture), she classified them into three broad categories covering mechanical characteristics such as interaction with the teeth and tongue; geometric characteristics, including shape; and others describing properties like wateriness or oiliness. This "texture terminology" is useful for researchers as they evaluate mouthfeel in a scientific way.

New analytical technology has also given the science a boost. In examining the texture of "creaminess," researchers grasped that the key was in the uniformity of the particles that made up the food. Improvement in technologies that measure the size of fine particles, as well as observational tools such as microscopes, supported the research.

Food texture research in Japan is advanced even by global standards. Various seasonal ingredients are used in traditional Japanese food, and "there is no other country with 445 textural terms," Nakamura said.

The next phase of food research will incorporate neuroscience. Researchers hope to link their findings with studies into which parts of the brain light up when someone eats appetizing food.

To understand how the brain interprets texture, more research is required. "We're gathering information to understand what kind of research we can do," Nishizu said. Food texture research has further ground to explore.