TOKYO -- The scientific taxonomy that classifies plants and animals has been shaken up over the past 20 years. Under new modes of classification, fish do not constitute a discrete category of animals apart from that of mammals.

Within the new system, monocotyledons, or flowering plants that have a seed with one embryonic leaf do not constitute a singular category and are now lumped together with dicotyledons, plants with seeds that have two embryonic leaves. 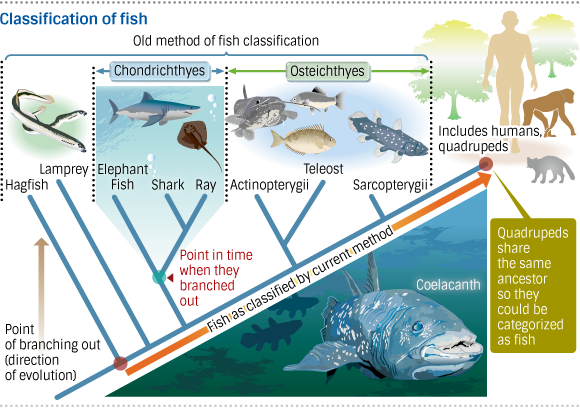 This has all happened as scientists develop new classification methods, stemming from findings from evolutionary science and genetic analysis.

According to the new theory, fish constitute a subcategory, which is part of the one that encompasses all quadrupeds such as mammals and amphibians, says Gento Shinohara, a senior curator at the National Museum of Nature and Science.

Flippers and gills give an empirical impression that fish should be categorized as a particular species but such a view does not hold up under the new framework created by today's cutting-edge science.

Coelacanth is considered a living fossil and bears some resemblance to carp and salmon, but it is more closely related to humans and other mammals if you consider how recently their common ancestor existed.

The new scientific approach has been brought about by technological advances in genetic analysis that have made it possible to examine animal genes more closely. In the past animals were classified according to appearance and internal organ characteristics together with guessing at their evolutionary history.

Now it has become easier to compare genetic sequence data, making it possible for a more accurate reading of when a given animal branched out into a category.

The new predominant method of biological classification, now called cladistics, originated in the work of German entomologist Willi Hennig in the 1970s. The method classifies animals as members of a monophyletic group that shares a common ancestor.

According to this line of reasoning, fish are untenable as a discrete species unless the grouping includes mammals. Birds and dinosaurs, widely different in appearance, also become grouped together.

Cladistics has made even more headway in the study of plants.

Through use of the Angiosperm Phylogeny Group system, which was published in 1998, scientists conducted a thorough genetic and evolutionary review of flowering angiosperm plants whose seeds are produced within a closed pod. Results differed significantly from the older approach of looking at plant exteriors to consider features such as the number of stamens and their workings.

Angiosperm plants have been divided into monocots and dicots. But recent studies showed some dicots to in fact be monocots. As a result, many flowers were reclassified. The lily was thought to constitute a single family, but is now divided into more than five families.

"Experts, who know a lot more about their trade than laymen, might be even more discombobulated (about the new findings)," said Jin Murata, a professor and the director of Koishikawa Botanical Gardens of the Graduate School of Science at the University of Tokyo.

"It has become possible to compare life forms as distant as mammals and fungi, making it possible to conduct debates about evolution by taking into consideration all life forms," said Nobuhiro Minaka, a senior researcher at the National Institute for Agro-Environmental Sciences. This raises the question of whether all life forms share a common ancestor.

In contrast with plants, the reclassification of animals is proceeding at a slower pace. While some researchers argue genetic data would suffice to pursue the on-going project, others object. Shinohara, who works at the National Museum of Nature and Science, said, "We should take a thorough look at not just genes but entire animals."

It is difficult, on the other hand, to conduct genetic research on animals that are extinct. This leaves no choice but to classify them according to their skeletal structures.

Fish appear more plausible as a discrete species to laypeople, a view that will likely die hard even after it is replaced by new research. As scientists redraw the family connections of plants and animals, this might create a chasm of opinion between researchers and those who are not experts. Taxonomy is crucially important for understanding biology and evolution. "I'm concerned if non-experts remain indifferent, just leaving the scientists to sort out tough questions," said Murata of the University of Tokyo botanical gardens.