Stuck in line at airport? The humble ant can help you 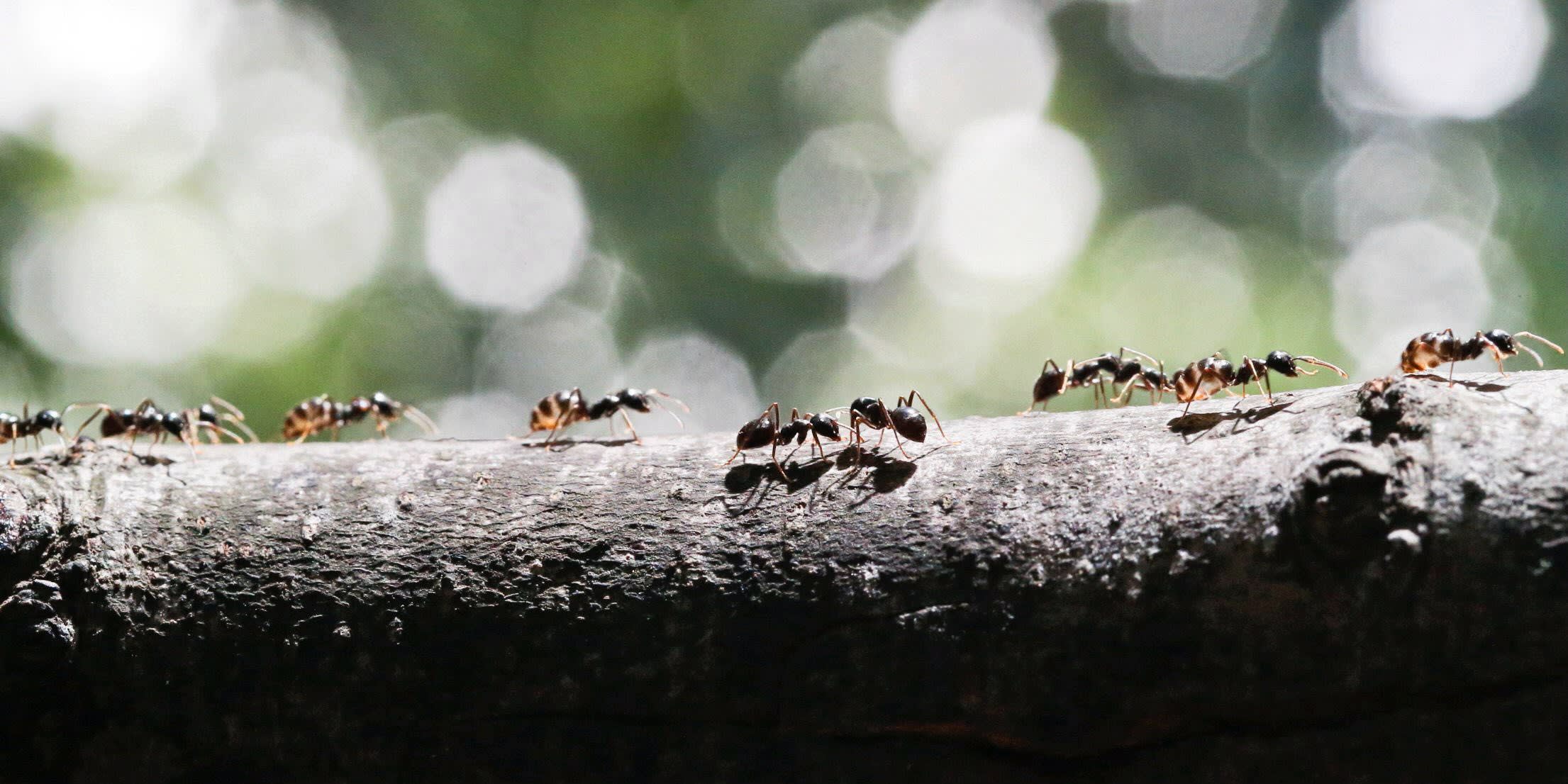 TOKYO -- Some scientists are trying to find answers to human problems by unlocking the secrets of fish schools and insect swarms, applying their behavioral patterns to ease congestion at airports or perfect self-driving technology.

"The way this job is being done now is worse than how ants would do it," Katsuhiro Nishinari, a professor at the University of Tokyo, often tells executives.

Nishinari has worked with 10 companies in areas such as manufacturing and logistics to research how to improve business practices. He took note of ant behavior while studying the mechanisms behind gridlock and now tests ways to apply it to how humans work.

Lines of ants do not need to slow down even when the insects gather en masse to move a big piece of food. "Ants use pheromones laid on the ground to communicate information like in a game of telephone," Nishinari explained. This bottom-up method lets them "respond flexibly based on conditions," he said.

The lesson has been applied in the customs area at Narita Airport near Tokyo, where the number of immigration counters had not kept up with the surge in foreign visitors, leading to long wait times. Nishinari helped develop a solution that involves sharing detailed information among airlines, the airport operator and the Ministry of Justice.

Carriers now communicate the number of non-Japanese passengers on Narita-bound international flights when they take off, letting the airport adjust the number of open counters by the time the passengers arrive. The system, introduced in January 2015, apparently cut wait times in half.

"Ant societies don't wait for direction from the queen," Nishinari said. "Human societies, too, should focus on bottom-up decision-making as they get bigger." The Eporo robot car is a milestone in Nissan Motor's efforts to create vehicles that avoid collision. The cars, about as tall as a medium-sized dog at 48cm, can travel in packs of seven without bumping into each other even if an obstacle intrudes. The Eporo moves around the offending object while communicating with the other robots to keep a certain distance from the rest of the pack.

Further development may allow for self-driving cars that can travel in groups, said Toshiyuki Andou, manager of Nissan's mobility laboratory and head of the project. For example, if two cars driving together get separated by a red-light signal, they can reunite quickly.

The robot's behavior is modeled on fish schools, which follow three rules: change direction to avoid collisions without hitting other fish, move at the same speed to swim side by side while maintaining spacing, and catch up after straying too far from the group.

The Eporo's sensors stand in for the lateral line in fish -- the sense organs they use to detect movement -- while communication modules help the robots maintain proper spacing.

"If this setup lets all the cars on the road smoothly avoid obstacles or slow down, it may be able to help ease gridlock," Andou said.

Biologists possess expertise that can yield all sorts of products and services, but tools are lacking to bring this information to companies. The fish behavior that inspired Nissan is widely known, Andou said. How can engineers gain access to knowledge of the natural world possessed only by biologists?

"There are a lot of things that are common knowledge among biologists but a surprise to engineers," said Riichiro Mizoguchi, a professor at the Japan Advanced Institute of Science and Technology.

For two years or so, Mizoguchi has spearheaded an effort to build a database of insects, fish and other living things to help engineers find specific traits. He aims to bridge academic fields that tend to be isolated from each other.

Desirable qualities are grouped together as general concepts, such as adhesion or water repellency. Information on organisms with these characteristics has been entered into the database with the help of specialists in various fields of biology.

For example, searching for a soil-resistant antimicrobial coating brings up related qualities, including hydrophilic properties, as well as living things with those characteristics, such as roses and morpho butterflies. This gives engineers a direction for their research.

From academia to industry

The business world is keenly interested in the database. Construction company Shimizu, precision instrument maker Shimadzu, Nippon Chemical Industrial and Ricoh are among the 16 companies involved in a biomimetics group set up last year within the Nanotechnology Business Creation Initiative.

"Company researchers are eager to find breakthroughs by learning from living organisms," said Akihiro Miyauchi of Hitachi. "With an extensive database, they could quickly incorporate little-known capabilities of living creatures."

With biomimetics taking off worldwide, the International Organization for Standardization, better known as ISO, set out definitions and optimization methods for the field in 2015. The group also is working on database construction standards. Japan submitted the method developed by Mizoguchi and his colleagues as a proposal last fall. Having this as the standard could give Japanese companies a leg up on foreign rivals in product development and overseas marketing.

The database covers 100 traits and nearly 1,000 species -- numbers that may seem large but represent only a fraction of the world's organisms. In other words, much of what the natural world has to offer remains hidden. Companies have a near-inexhaustible trove of inspiration to unearth.