TOKYO -- Kyoto University is conducting Japan's first ever captive research on bonobos, in hopes of uncovering some of the mysteries of human nature and our evolution. The bonobo is a close relative of the chimpanzee, and the two species of primates are the closest living links to humans. In contrast to the chimpanzee, the bonobo is known for its avoidance of conflict, which has earned the species the nickname, "the ape of friendship."

The university is conducting its studies at Kumamoto Sanctuary, which is part of the university's Wildlife Research Center in Kumamoto Prefecture, southern Japan. The four bonobos living there -- a 19-year-old male and three females aged 22-32 -- used to live at an American zoo.

The bonobo is designated an endangered species, and lives in the wild only in the thick forests of the Democratic Republic of the Congo, Central Africa. It belongs to the same genus as the chimp. There is very little genetic difference between the two species. In fact, the bonobo, which is slightly smaller than a chimp, was once thought to be the same species, and was called the pygmy chimpanzee. The Kumamoto Sanctuary plans this summer to start cognitive studies of its four bonobos, testing their intelligence and memory skills.

Using computer screens and touch panels, the researchers will try to teach bonobos numbers and have them remember human faces. They also plan to give the bonobos tools made of stone and other materials, and observe what actions by humans and other animals the bonobos pay the most attention to. The results of these studies will be compared with the research center's findings from 30 years of similar studies on chimpanzees.

"Until recently, the chimpanzee was the primary subject of primate studies," said Professor Satoshi Hirata of the Wildlife Research Center, who leads the bonobo study. Chimps and humans share about 98.8% of their DNA. Western institutions have been studying chimps for more than a century. By comparing the behavior and mind of chimps with those of human beings, researchers over the decades have tried to learn about the common ancestor from which both humans and chimpanzees evolved. 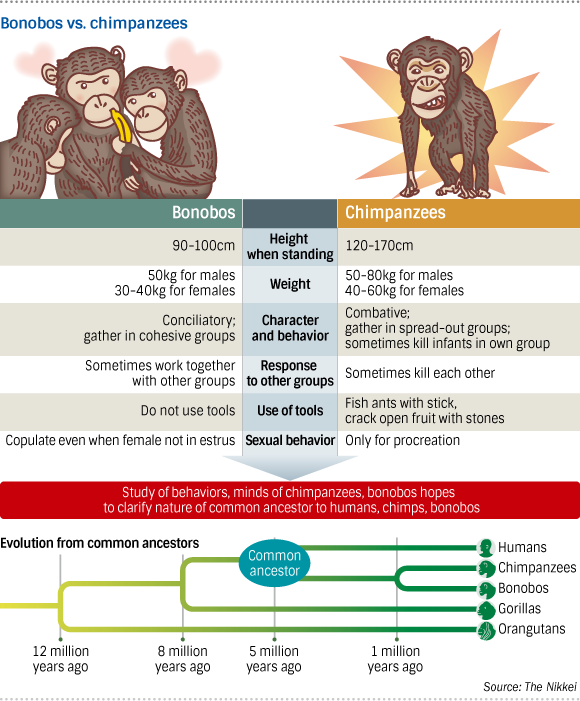 Then, why has the Kyoto University team now decided to begin the research on bonobos? Because while the two apes look similar, there are huge differences between chimpanzees and bonobos in terms of character and social life.

Chimps are often portrayed as being clever and friendly, but are by nature very aggressive and competitive. Their societies are male-centered and chimp groups are very hostile to outsiders -- violently so. Male chimps inside their own groups will fight for dominance and pick on weaker members. Chimps are also known to kill infant members of their groups.

"If we studied only chimpanzees, we would have to conclude that human beings are aggressive by nature," Hirata said.

Bonobos, meanwhile, have female-dominant communities and value group unity. A bonobo group peacefully coexists with other units. Groups often help each other out. Food is shared within a group. Hirata says no bonobos have ever been observed killing each other or committing infanticide.

The Jekyll and Hyde differences between chimps and bonobos could give clues to the dual nature of human beings.

Studying the intelligence, emotion and thinking of the two ape species could reveal what humans have inherited from the ancient ancestor common to all three species, and what may have been lost through evolution.

"The study will probably be able to do much to unravel the mystery of what is humanity's true nature," Matsuzawa said. He also expects the research to provide hints about how human beings can build peaceful and co-existing societies.

Not all bonobo behavior is peaceful, however. There have been reports of wild bonobos playing with small monkeys, and even hunting them and eating them.

Bonobos also rarely use tools. The ability of humans to use tools has helped us dominate other species. Chimps, too, are adept at using stone tools and sticks. The bonobo project hopes to shed new light on how this difference may have shaped the evolution of human intelligence.

The bonobo is classified as a great ape, as are chimps and gorillas, which all live in Africa, and orangutans, which live in Southeast Asia. Some scholars categorize the great apes into more species, based on body features. Humans are also great apes.

The exact population of nonhuman great apes is not precisely known. But recent data puts the population of bonobos at 30,000-50,000, chimps at 170,000-300,000, gorillas at about 110,000 and orangutans at 50,000-80,000. As the populations of all these great apes are on the decline because of deforestation and the expansion of farmland, concerns are growing over the future survival of these species.

During the course of evolution, the ancestors of bonobos and chimps diverged from humans about 5 million years ago. This is quite recent from the perspective of the 4-billion-year history of life on Earth. The study of the closest surviving relatives to humans may go a long way toward solving the question of what makes us act and think the way we do.