TSUKUBA, Japan -- This is the time of year when distinguished scientists, economists and authors across the world wonder if an announcement is forthcoming from Stockholm, proclaiming them as winners of the annual Nobel Prize awards.

Winning the award is arguably the highest achievement in many fields. But are there any how-to guides about winning it? While it is too late for the latest awards, former laureates have sage advice for young aspirants.

"Don't allow yourself to become overly attached to any one authority in your field," said Leo Esaki, the 1973 winner of the Nobel Prize in physics for his pioneering work on electron tunneling in solids -- a discovery now dubbed the "Esaki tunnel diode."

The 94-year-old physicist and former president of the University of Tsukuba says becoming too attached to a mentor "risks losing sight of yourself and wasting the free-spirit of youth."

Speaking to young scientists at an Oct. 3 conference in Tsukuba, a government-designated city of science and research on the outskirts of Tokyo, Esaki said, "Although a great professor may be awarded the Nobel Prize, it is unlikely his or her subordinates will ever attain such heights."

Not becoming too close to prominent professors is one of Esaki's "five don'ts" for wining. His others include being constrained by past experiences and social conventions, holding onto unnecessary things or thoughts, avoiding confrontation when defending one's position, and losing the curiosity of childhood.

Of course, Esaki is not offering any guarantees, instead referring to his ad hoc list as "suggested guidelines."

A younger laureate, Shinya Yamanaka, winner of the Nobel Prize in physiology or medicine in 2012, said he "couldn't agree more" with Esaki's five don'ts. Yamanaka, who achieved a major breakthrough in regenerative medicine for his discovery of induced pluripotent stem cells, revealed that it was proving his mentor's hypothesis wrong during his younger days that defined his career path. "That was the moment I realized I should become a scientist," not a surgeon, he said. 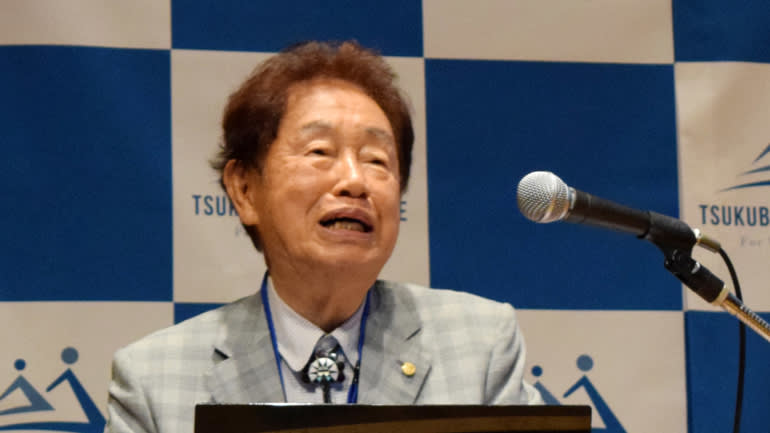 Leo Esaki, 1973 Nobel chemistry laureate, told young scientists his five don'ts in winning the award like him at the Tsukuba Conference on Oct 3. (Photo by Kenji Kawase)

The 57-year-old scientist also believes that challenging others is a good way to gain expertise. His position at Nara Institute of Science and Technology gave him opportunities to mingle with scholars from various fields, leading to many far-ranging discussions and debates. Yamanaka admits that he often found himself embroiled in "heated arguments" with colleagues, but at the same time he "learned a lot from scientists of different backgrounds."

This open approach to research and debate was key to Makoto Kobayashi's success in 2008, when he won the Nobel Prize in physics for his discovery of the origin of broken symmetry, which predicts the existence of at least three families of quarks in nature. Like Yamanaka, the 75-year-old Kobayashi spent much time in freewheeling discussions with colleagues at Nagoya University, enabling him to enrich his knowledge beyond the strict confines of traditional academia.

"Usually in textbooks and research papers, descriptions are made in logical and coherent manners, but many undescribed thoughts in conversations are hidden behind sentences," he said. Kobayashi's verbal sparring matches ended up to be "good opportunities to learn about such undescribed things and to widen my viewpoints."

This outlook is shared by British Nobel laureate John Ernest Walker. The 1997 winner in chemistry for elucidating the enzymatic mechanism of adenosine triphosphate -- a complex organic chemical that drives various activities in living cells -- was nurtured in the open environment of MRC Laboratory of Molecular Biology at Cambridge.

According to Walker, the structure of the institute was flat with "no hierarchy." When he joined the lab in the mid-1970s as a young chemist, there were already five Nobel laureates on board: Frederick Sanger, James Watson, Francis Crick, Max Perutz and John Kendrew. But everyone in the lab addressed each other by their first names, took tea together and dined together. "This encouraged dialogue and I did not feel intimidated," Walker said. The lab has landed 12 Nobel Prize awards shared among 16 individuals.

Despite the success of MRC, Walker said that creating a similar environment is easier said than done. "I know from personal experience that it is difficult actually, because I find younger people put me on a pedestal, although I don't want to be there," he told the Nikkei Asian Review on the sidelines of the Tsukuba Conference. He feels that they tend to be frightened and intimidated by him.

"How do I reduce that intimidation is something that I still have to deal with on a personal basis."