The deep, salty origin of the freshwater Japanese eel

The delectable freshwater eel, or unagi in Japanese, has long been a mysterious morsel. As far back as ancient Greece, people have wondered where eels come from because nobody had ever seen their eggs or larvae. 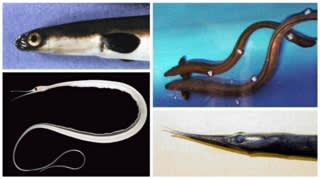 Clockwise from top left: An eel with huge eyes for long-distance spawning migration; Japanese eel; and two species of eels that live in the deep ocean.   © Courtesy of Michael J. Miller

Aristotle, studying the European eel more than 2,000 years ago, concluded that eels were born from the mud because they did not have full-fledged testes or ovaries. Spontaneous generation was repudiated long ago, but given the knowledge level of his time, Aristotle's explanation is remarkable for his use of scientific deduction.

There are roughly 800 eel species, including conger and moray eels, but it was only in the modern era that evidence began building toward an answer to where they came from.

In the 19th century, people discovered that certain flat, transparent fish larvae, shaped like elongated leaves and called leptocephali, would develop into eels when raised in aquariums. Then, in the early 20th century, Danish biologist Johannes Schmidt collected juvenile European eels from across a broad stretch of the North Atlantic Ocean and discovered that the eels migrate out into the open ocean to a spawning ground in the Sargasso Sea, thousands of kilometers away from continental Europe. Japanese fishermen capture juvenile eels that have traveled thousands of kilometers to reach the coasts of East Asia.

What about Japanese eels, consumed in huge quantities as broiled unagi in Japan and also eaten in neighboring countries like China? Scientific investigations to identify their spawning grounds began in the second half of the 20th century. But despite large-scale studies, it was only a few years ago that scientists succeeded in actually collecting mature males and females together with newly hatched larvae. It turns out that Japanese eels spawn in the waters off the Northern Mariana Islands in the western Pacific Ocean, some 3,000km away from Japan. The juvenile fish then travel thousands of kilometers to return to the coasts of East Asia and their habitats in Japan, China, Taiwan and South Korea.

It is those juveniles, captured after their long journey, that are raised into the eels that grace the rice bowls of Japan. They are not, strictly speaking, "farm-raised" eels, and scientists are still working to develop a system of full-cycle aquaculture. Until that happens, all farm-raised eels will continue to depend on these wild-caught resources.

For biologists, where eels come from is really two questions, one about their geographical origin and the other relating to their ancestral origin.

Organisms have reached their present states through evolution. Humans and chimpanzees diverged from a common ancestor some 6 million years ago and ultimately evolved into the two separate species they are now. In the same way, there must be relatives of the current 19 species of freshwater eels that followed a different evolutionary path from a common eel ancestor.

To find these relatives, a team of researchers, including this writer, from the Natural History Museum and Institute, Chiba, and the University of Tokyo conducted a large-scale comparative study of the mitochondrial genomes of representatives of the more than 800 species of eel.

Publishing these findings in the Biology Letters of the Royal Society created a big global stir.

The conclusion also unexpectedly connected some dots. Though it had been determined that adults of both the European and Japanese eel species travel thousands of kilometers from their freshwater homes to spawn far away in the open ocean, no one had a clear answer for why they had evolved to make such a taxing migration. What could compel eels growing up in the food-rich freshwater environments of the tropical and temperate zones to set out on a journey of thousands of kilometers in ocean waters which are so vastly different in osmotic pressure?

After publishing our findings, we realized that a deep-water origin for freshwater eels also offered an explanation for their long-distance spawning migration: These eels might actually be making a trip back home to their roots.

For more than 2,000 years, people have been asking about the geographical and evolutionary origins of freshwater eels. But while those answers are finally in hand, the question now is what the future holds, and nobody has the answer to that.

Human activity is casting a dark shadow over the future of freshwater eels. The European eel is already on the endangered species list due to overfishing, and the Japanese eel has followed. Companies in Japan and China have begun culturing the Indonesian eel, and these eels too are being driven to the edge of extinction by the overfishing of juveniles for eel farms.

A "living fossil" that is believed to be extremely close to the ancestor of all eels was discovered in an undersea cave in Palau.   © Photo courtesy of Jiro Sakaue

Our research group recently discovered a "living fossil" that we believe is extremely close to the ancestor of all eels. Discovered in an undersea cave in Palau, it is a bizarre eel with many features heretofore known only through the fossil record. It has been classified in a new family, genus and species.

The discovery is in some ways prophetic. Freshwater eels have developed their peculiar lifestyle over tens of millions of years of evolution, but that lifestyle -- and their very existence -- is threatened in short order by the drive to feed a hungry public with cheap eel meals. Will eels survive the future only by hiding out in caves like hermits? My hope is that we can learn to have a deep respect for living species and the evolution that has made them what they are, in the same way we respect human cultural heritage.

Masaki Miya is a senior research scientist at the Natural History Museum and Institute, Chiba, in Chiba Prefecture, Japan.