Sega Sammy gets a crash course in casinos in South Korea TOKYO -- Japanese conglomerate Sega Sammy Holdings is practicing the tricks of the casino trade through a joint venture in South Korea, in preparation for the dawn of the casino era at home.

Sega Sammy, whose areas of expertise include pachinko and "pachislot" machines and the resort business, has teamed up with Paradise Group, a South Korean casino operator.

Sega Sammy dispatched a team from Japan to get involved with every aspect of the Paradise City project, including design and day-to-day operations. Japan is moving toward allowing casinos on its soil, and the company wants to be ready. 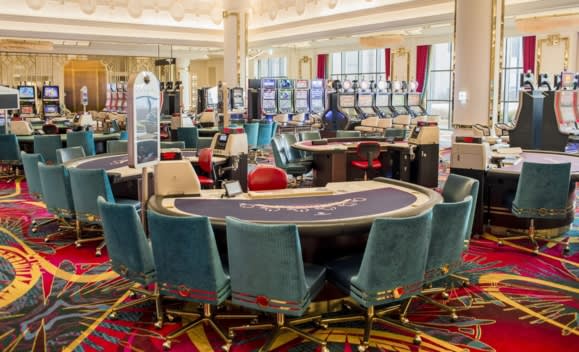 The interior of Paradise City

Japan's parliament at the end of last year enacted the so-called integrated resort promotion law to allow casino gambling, though the first legal facility is still years away.

"Different" from the movies

Paradise City was built on a 330,000-sq.-meter site adjacent to Incheon International Airport, the gateway to Seoul. The resort houses a casino, a hotel, a convention center and other facilities.

Paradise City "is more fantastic than I expected," Hajime Satomi, Sega Sammy's chairman and CEO, said at the opening ceremony. For the 75-year-old, the opening fulfilled a long-held desire: He had been talking about breaking into the casino business for more than a decade.

Sega Sammy and Paradise Group launched the 1.3 trillion won ($1.16 billion) project in 2012. Yoshinori Ishii, the 52-year-old head of Sega Sammy's business development office, has led the project from the beginning. "Building a facility abroad was unknown territory for our company," he said. Despite the pressure, Ishii said he was "rather excited" to tackle this new task.

He found an ally in Hidehisa Uemoto, 67, a veteran architect with experience in overseas projects. The two once worked at the same construction company.

Uemoto joined the Paradise City project as an adviser, working with architects from Paradise Group on the design. Even for Uemoto, planning a casino presented "interesting" challenges that were outside his comfort zone.

The tables on the casino floor are also arranged carefully to ensure the safety of visitors and employees -- in case, say, an angry gambler goes on a rampage after losing.

After the Paradise City project started, a number of Sega Sammy employees volunteered to participate. In spring 2014, the company sent a team of six to South Korea.

Shigeki Aoyama, 44, is one of them. He had previously helped run an amusement facility in China. In South Korea, he has picked up knowledge about all facets of the casino business -- from the job of a dealer, the ins and outs of the games and proper chip-handling procedures to general management.

"I found that actual casinos are quite different from the ones I see in movies," Aoyama said.

Now that Paradise City is open, Aoyama plans to stick around for the time being, to absorb as much know-how as possible. "My top priority is to extract a lot of information from Paradise," he said.

Though they are project partners, Paradise Group is clearly the mentor in the relationship, given its experience running casinos in Busan and on Jeju Island.

Besides giving itself a crash course, Sega Sammy has another goal in mind: shaping Japanese perceptions of gambling.

Affluent Japanese are among the target clientele for Paradise City. Noritaka Sugiyama, 43, joined Sega Sammy's Paradise City team in January and is in charge of attracting customers to the resort. "Paradise City will determine Japanese people's impressions of casinos," he said.

Within Sega Sammy, employees are clearly jazzed about the project and the potential of the casino business. The company now has 35 staffers stationed in South Korea, and even when they are needed back home, "they are all reluctant to return," Ishii said.

Proponents of casinos in Japan still face a bumpy road, due to strong public concern over gambling addiction and other potential side effects. But Aoyama sounds confident. "We do not need to worry about that," he said. "What we need to do now is just acquaint ourselves with the casino business."