TOKYO -- Japan's Casio Computer expects its first record group operating profit in nine years for fiscal 2015, and it has selfies to thank.

The roaring popularity of its compact digital cameras designed to help people take better self-portraits is the main reason the company expects profit to hit 50 billion yen ($403 million) for the year ending March. 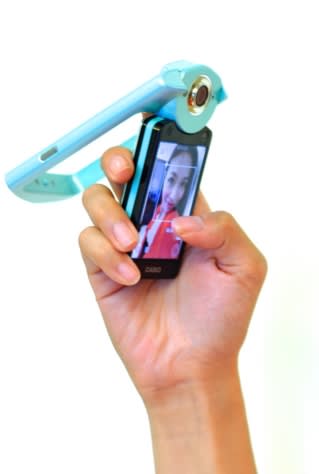 With Casio's TR series cameras, users can rotate the frame and monitor separately at various angles.

Even with their hefty price tag of over 100,000 yen, cameras in Casio's TR series are strong-sellers in an economically decelerating China.

"The prices [of the TR-series cameras] are equivalent to those of digital single-lens reflex cameras," said Akinori Takagi, senior executive managing officer at Casio.

The cameras are also bucking the global downtrend in the digital camera market.

The high retail price means the selfie-friendly product line remains extremely profitable. Those plump margins helped the electronics maker log a record profit for the April-September half, its highest half-year figure in nine years. Market watchers have long focused on the company's solid income from its G-Shock brand and other lines of watches, but now it looks as though the company has developed a new cash cow.

For years, the digital camera business was a burden for Casio. In fiscal 2011, the operations posted a loss for the fourth straight year amid a shrinking market. To survive the competition, Casio reduced the number of its models and reduced the sales territory. It was at that time that the company developed the TR series.

The cameras are designed so users can rotate the lens, frame and monitor at various angles. Still, first-year sales were so limp that the company began talking about pulling the plug on the line.

That all changed, however, after a user in Hong Kong blogged about how the camera's shape-shifting abilities made it perfect for taking selfies. Word soon caught on in mainland China, and before long the product was flying off shelves.

Sensing an opportunity, Casio began tweaking the cameras to make them more appealing to Chinese women in their 20s. The company knew selfies were popular among that demographic, and that even when taking group tours, these women tended to prefer snapping shots of themselves rather than the local scenery. The company also knew that the people taking the photos would want to look as attractive as possible.

That is why the TR cameras feature, in addition to high-quality lenses and sensors, image-editing software that enables users to adjust the skin tone.

Since April 2014, Casio has opened TR series-only stores in the cities of Shanghai, Chengdu and Guangzhou. The interiors have the appearance of a luxury cosmetics store, helping create a strong brand image. This upscale approach also helps the company avoid price competition.

What was once a money-losing business turned to the black in fiscal 2013. For fiscal 2015, Casio expects the segment to log an operating profit of 4.2 billion yen, up from 3.6 billion yen a year earlier. While digital cameras still account for less than 10% of the company's total business, the turnaround has been a big boost.

The company's stock briefly hit a year-to-date high of 2,734 yen on Monday. Whether that number keeps going up depends to a certain degree on the success of the new TR line, slated to hit the market by the end of the fiscal year.