Sending up the Internet balloon

JAKARTA -- Google is bringing Project Loon to Indonesia, an ambitious balloon-driven Internet initiative to extend connectivity to remote parts of the archipelago that lack communications.

Google's local partners are Telekomunikasi Indonesia's mobile arm Telkomsel, XL Axiata and Indosat. The four companies agreed on Wednesday to a pilot test across the archipelago in 2016 using the 900 megahertz radio frequency. 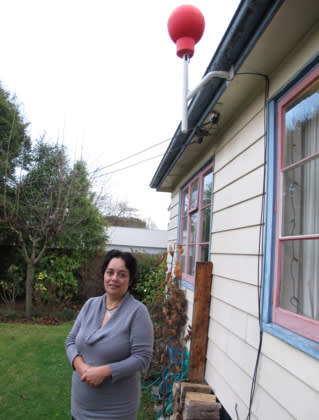 Tania Gilchrist stands outside her Christchurch home in 2013 after it was fitted with a red Google Internet receiver as part of Google's balloon testing program in New Zealand.

Evolving the balloon-related technology for Indonesia is expected to take at least two years. Google has already partnered local carriers for tests in Australia, New Zealand and South America.

Effectively serving as movable airborne telecom towers, Project Loon uses balloons with antennas to bounce ground signals up and down with small ground stations. The balloons can extend Internet services to remote areas, including mountainous islands.

With a population of 250 million, and rapidly spreading smartphone ownership, Indonesia is attractive to Internet companies looking to boost access and advertising revenue.

Other steps have already been taken to improve Internet connectivity. Google has rolled out a service that loads websites more quickly on slow Internet connections, and Facebook introduced Internet.org earlier in the year to facilitate access to selected websites without data charges.

Mobile carriers are cautious of entering long-term partnerships when business potential is uncertain. XL and Telkomsel have yet to commit to a commercial service from Project Loon.