Away from flashy and lavish and toward down-to-earth is a common thread in consumers' spending patterns across Asia, as highlighted in Nikkei Inc.'s 2016 rankings of hit products and services.

The rankings, covering 11 Asian markets, show items with high performance and quality relative to price dominating the landscape. Slowing economic growth and aging populations are thought to be major factors behind the rise of more sensible consumption.

In Malaysia, Mr. D.I.Y.  -- a chain that combines discount stores and home improvement centers -- grew rapidly, with 60 locations opening this year alone. The nearly 240 stores across the country sell everything from do-it-yourself supplies to low-price grocery and household items, carrying 30,000 products.

Second-hand goods retailer Bookoff, from Japan, drew attention with its November opening of a Malaysia store selling used apparel and other preowned items. 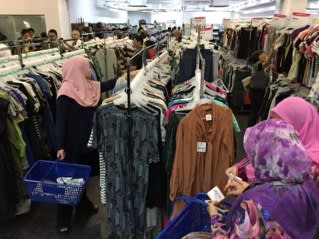 In smartphones, cheaper handsets with high functionality and high-quality image and audio sold well. In China, Oppo brand phones from Guangdong Oppo Mobile Telecommunications were popular, as were vivo handsets by Vivo Communication Technology. In India, the government-led "make in India" initiative has pushed up the percentage of domestically assembled smartphones to about 60% of the annual sales volume of a little over 100 million units. Smartphones priced the equivalent of no more than $77 are gaining traction in Myanmar.

Gourmet food on street, at home

In the food industry, word of a street food stand in Singapore that won a Michelin star in July went viral, with people queuing up for two hours for a bite. The "world's cheapest" Michelin-starred meal provider sells dishes of a little over a dollar.

In Indonesia, an instant noodle product named Bakmi Mewah, which includes cooked chicken, became a major hit. At around 43 cents, the product sells for triple the price of normal instant noodles, but Bakmi Mewah has been popular because it allows people to enjoy "restaurant taste" at home.

Economic growth is slowing across Asia. Indonesia, Thailand and Malaysia saw growth of around 7% in 2010 but the rate shrank to around 2-4% in 2015.  Growth is markedly decelerating in China, too. Thailand's population is forecast to start shrinking in the mid-2020s due to aging demographics. These shifts seem to explain the move from lavish spending to more sensible consumption. 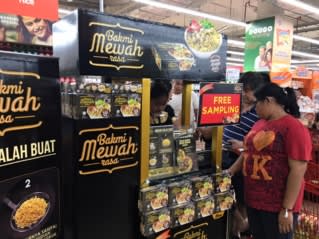 Shoppers at a supermarket in Jakarta try out Bakmi Mewah, an instant noodle that is touted to offer restaurant taste at home.

In entertainment, Japanese content further gained in popularity in the region.

"Pokemon Go" became a social phenomenon around Asia, including Vietnam, Thailand and Taiwan -- so much so that public offices and schools in Vietnam banned the game entirely.

The Japanese animated movie "Your Name" captured the heart of young Taiwanese and Thais, among others. In China, the title's box office topped 530 million yuan ($76.1 million) as of this past Saturday -- making it the biggest-selling Japanese movie there ever, only 16 days after its release. The song "PPAP" by Japanese singer Piko-Taro gathered attention in Thailand, among other places.

The Japan boom was apparent in travel and shopping as well. Filipino visitors to Japan jumped around 30% on the year to 300,000. A tour package costing around 200,000 yen ($1,705) to visit such well-known sites as Tokyo Disneyland, Tokyo's Asakusa area and Mount Fuji was popular.

The explosive shopping spree of Chinese visitors to Japan has subsided. But cross-border online purchases of merchandise from Japan and elsewhere have picked up instead. Such transactions in 2016 are seen surging 33% to 19 trillion yen.

In the Philippines, T-shirts and mugs of President Rodrigo Duterte, who took office in June, sold well. Among Thais, whose King Bhumibol Adulyadej died in October, mourning clothes and the king's biography sold briskly -- reflecting the people's love for the long-reigning monarch.