TOKYO -- Japan's annual shareholder meeting season gets into full swing later this month. But thanks to new rules designed to encourage dialogue between companies and shareholders, a lot of the action is happening even before the doors open -- and the markets are paying close attention.

In Japan, shareholder meetings used to be largely ceremonial, scripted affairs. But that is changing as shareholders grow bolder and companies become more attuned to the needs of their investors. Today, the gatherings are becoming market-moving events.

According to the Tokyo Stock Exchange, this year's shareholder meeting season will peak on June 26, when slightly over 40% of all companies listed on the bourse plan to hold such gatherings. But dialogue between companies and shareholders is already progressing well ahead of the meetings, giving market players a taste of things to come.

Toyota Motor has announced plans to issue a new type of share targeting domestic retail investors. Buyers will be required to hold them for five years. The idea has sparked controversy among the automaker's shareholders and is certain to be a hot topic at the upcoming general meeting.

Meanwhile, industrial robot manufacturer Fanuc has started returning its huge cash reserves to shareholders in response to growing accusations of stinginess. The market liked the news, with the company's share price at one point surging 40% from the year-end level.

The increased chatter between companies and their shareholders ahead of the general meetings stems from the TSE's introduction earlier this month of the so-called corporate governance code -- a framework for encouraging corporate managers to pay more heed to the wishes of their shareholders.

Last year, the Financial Services Agency introduced the so-called stewardship code, a framework for encouraging institutional investors to express their opinions to companies in which they invest. More than 190 investors and others have adopted the code.

Also encouraging dialogue between the two sides is the fact that bad memories of a string of hostile takeover bids in the mid-2000s are fading. Around that time, U.S. activist investor Steel Partners launched one tender offer after another in Japan, including one directed at Bull-Dog Sauce. The targeted companies felt under attack, and strengthened their defenses against unwanted investors.

These days, activist investors tend to limit their proposals to requests for minority stakes. This makes it easier for the targeted companies to agree to sit down at the negotiation table.

So what developments at this year's round of meetings are most likely to impact stock prices? According to a survey of stock market players conducted earlier this month by Nikkei group company QUICK, a leading 34% of those polled cited shareholder returns as the topic of greatest interest. 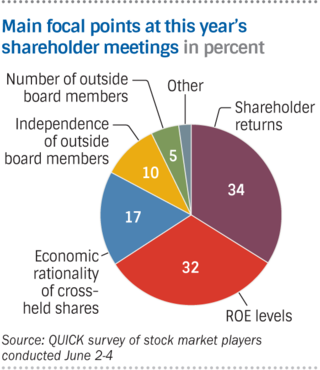 Next, at 32%, was return on equity, a key gauge of capital efficiency.

That means about two-thirds of those polled expressed interest in seeing whether companies' management styles are shareholder-oriented.

U.S. research company Evercore ISI said in a June 8 investor report that whether a company decides to go above and beyond the minimum required changes under the corporate governance code is key to the long-term viability of the reforms it implements.

Among the criteria it cited for basing investment decisions on, Evercore listed "a significant reduction in cross-held shares" and "remuneration for executives in accordance with ROE levels."

Some market participants are hoping that better dialogue with shareholders will spur companies to put their roughly 100 trillion yen ($803 billion) in cash reserves to better use, which in turn would push up stock prices, encouraging Japanese to funnel more of their estimated 1,700 trillion yen in financial assets into the market.

After decades of having little market-moving impact due to the prevalence of cross-shareholdings and interference by corporate racketeers, annual shareholder meetings are finally starting to regain their significance in the stock market.