With only two taps on a smartphone, cyclists can take a Mobike out for a spin.
WATARU KODAKA, Nikkei staff writerDecember 15, 2016 19:00 JST | China
CopyCopied

On top of services that are now global standards, such as taxi-hailing, ride-sharing and home-sharing apps, Chinese startups are offering more variety. 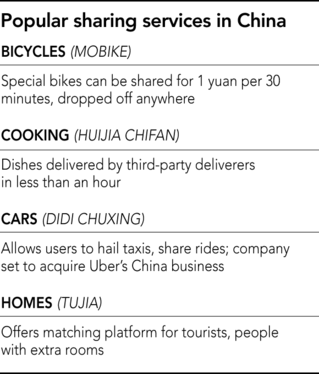 Mobike, a bicycle-sharing service, is rapidly becoming popular. At lunchtime in Shanghai, a 20-something businesswoman left the office, took out her smartphone and waved it over a QR code on a Mobike bicycle parked on the street. In a matter of seconds, the lock opened and she was off to a popular restaurant some distance away from her office.

The app allows users to find nearby bicycles on a map. After they are done, cyclists simply lock the bike. The charge, set at 1 yuan (14 cents) per 30 minutes, is settled automatically on their smartphones. After paying a deposit of 299 yuan at registration, renting is as easy as two taps on a smartphone.

The bike-affixed lock contains a SIM card to allow for automatic unlocking. It is also equipped with GPS, which makes it possible to locate every single bicycle on the system. The tires are highly durable and tubeless, and thus require no pumping.

The service is growing rapidly thanks to the bikes' urban appearance -- a silver frame with orange wheels -- and its convenience -- you can drop it off anywhere you want.

"In China, congestion and air pollution get worse by the year," said Mobike CEO Wang Xiaofeng, who founded the company in 2015. "Bicycles help solve both problems and are good for your health," he added. Wang has served as the Shanghai head of Uber Technologies. Mobike currently operates over 100,000 bikes in Beijing and Guangzhou, among other places.

Huijia Chifan allows people to share the food they make. The concept of the service is to share delicious and safe food. On the platform, amateur cooks post photos of their dishes along with prices and ingredients. Users type in a location and time, and a delivery company brings the meals to their doorstep.

Delivery apps for restaurant meals have been around for some time. What Huijia Chifan offers is a platform to share individual kitchens and cooking skills. People enjoy ordering home-cooked meals at reasonable prices with the help of customer reviews.

The company tests the food providers. Also, users are required to pay 5 yuan for insurance against food poisoning and other possible problems. Up to 300,000 yuan will be paid to cover losses.

Changing consumer trends in China are behind the rise of sharing services, especially among the young. As the country's economic growth slowed, shopping as a way to impress others also waned. Consumption has clearly matured, with people trying to save money by sharing and using the extra cash on movies or dining out.

The prevalence of smartphones with which people can make payments as small as one yuan is also driving the sharing economy. Payment services offered by e-commerce giant Alibaba Group Holding and internet company Tencent Holdings are popular.

And with most Chinese university students living in dorms where four to six people share not just a room but all kinds of things, the sharing culture is spreading and fostering new services. "I have no problem with sharing daily goods and meals with others," one student in Shanghai said.

China's sharing economy was valued at 1.95 trillion yuan in 2015, according to an estimate by a Chinese state institute. It is believed to be the second largest in the world after the U.S. and is expected to grow by about 40% annually over the next five years. The country's sharing economy has entered a golden period, Tencent CEO Pony Ma Huateng wrote in his book.

In ride sharing, Didi Chuxing, the Chinese equivalent of Uber, leads the market. In home sharing, Tujia.com offers similar services as America's Airbnb. This year, German automaker Daimler began offering a car-sharing service in Chongqing that allows customers to drop off cars freely. The service drew nearly 80,000 registrations in two months, according to the company.

The shift to the sharing economy reflects a waning obsession among the Chinese for owning things. This may prove to be an important key to succeeding in the Chinese market now.

As the industry expands, competition is already heating up. In Shanghai, a rival of Mobike started offering a similar service at a tenth of the charge. Mobike now offers light vehicles at half the original price, at 0.5 yuan per 30 minutes.

Companies in the sharing sector are easy to start and prone to price competition. However, new services are hurting sales at existing brick-and-mortar shops, along with their many jobs. It is undeniable that the rise of the thrift economy is making people's purse strings even tighter.

Regulations have become an issue for the operators of sharing services. For instance, Shanghai city authorities issued in March an unprecedented warning against food sharing apps for individuals, such as Huijia Chifan, calling on people not to buy food from unlicensed individuals. Huijia Chifan argued that the incidence rate of trouble related to the service is 15 times smaller than at restaurants.

Innovative ideas are often born out of a shrewdness that can cleverly spot openings. But the spread of sharing services necessitates rules to ensure safety.