Sharp sticking to LCD guns amid global shift to OLEDs 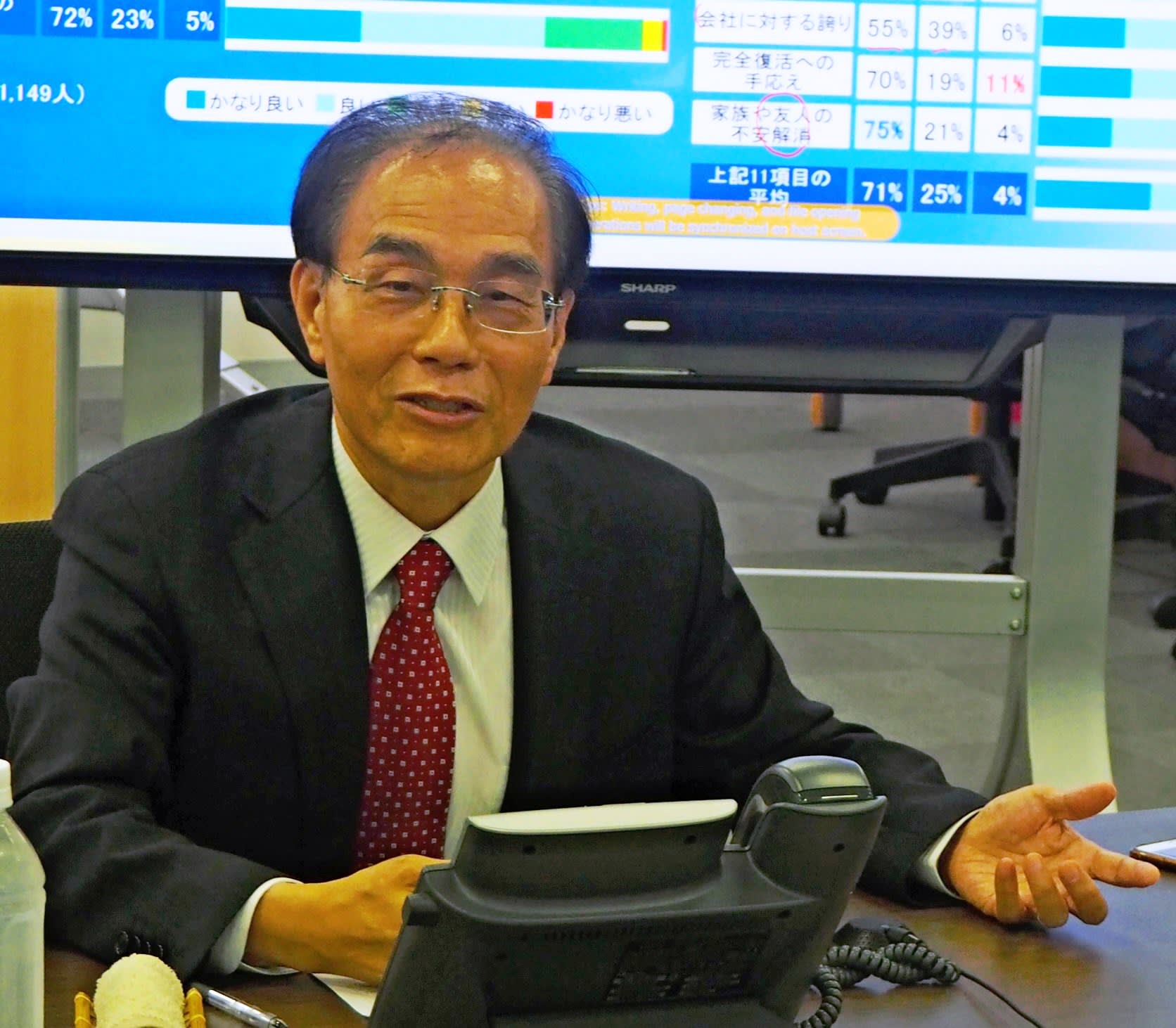 OSAKA -- While others are pouring resources into organic light-emitting diode displays, Sharp is doubling down on good old liquid crystal displays.

But the Japan-based electronics maker, which has recovered under Taiwanese parent Foxconn, says that demand for ultrahigh-definition 8K televisions will make the bet pay off.

Saturday will mark a year since Foxconn, the Apple assembler formally known as Hon Hai Precision Industry, closed the $3.8 billion deal to purchase a majority stake in what was a troubled former Japanese star.

"It flew by really fast," Tai reflected with a smile. Indeed, the transformation of Sharp has been swift in the year since Foxconn's second-in-command stepped in as the company's new chief executive.

Late last month, Sharp turned in a net profit for the quarter ended in June, marking the first black ink for the three-month period in seven years. What's more, it was the company's third consecutive quarterly profit.

The V-shaped turnaround is all the more miraculous considering Tai assumed his current position back when Sharp seemed mired in perpetual red ink. The stock market has certainly taken notice. Sharp's share price has more than quadrupled over the past year.

Rely on your strengths

However, Tai is not basking in the success just yet. "Although we have passed the test domestically, we still haven't achieved passing marks abroad," said Tai. "I wish to ramp up the offensive overseas."

The weapon of choice to develop overseas markets will be 8K LCD panels, positioned as Sharp's core growth business. Those displays offer four times the resolution of legacy 4K displays, and will be compatible with next-generation 5G signals. Apart from entertainment, they can be used in applications including remote medicine and security systems.

Sharp plans to roll out 8K TVs in Japan next year, when public broadcaster NHK will start officially transmitting video in 8K.

Sharp's strategy is a departure from rivals, who are busy shifting from LCD to OLED panels for smartphones and large-screen TVs. That club includes Japanese electronics manufacturers investing in OLED TVs. The organic displays are steadily becoming a favorite to succeed 4K panels in the high-end TV market.

It's not that Sharp is entirely ignoring OLED technology. The company has set up an experimental production line that produces small to midsize panels at a plant in Sakai, near Osaka.

But when it comes to big-screen OLED panels, LG Display has a virtual monopoly. If this were sumo wrestling, the South Korean company would be the yokozuna grand champion while Sharp is still playing in the second-tier division, said Tai.

Instead of trying to punch above its weight class, Sharp aims to once again become a leading company in yet-to-be-commercialized 8K displays, according to Tai.

Foxconn and Sharp are looking to assemble an operation that stretches across both sides of the Pacific. On July 26, Foxconn announced it will spend $10 billion to build a large-panel LCD factory in the U.S. state of Wisconsin. The companies will build the most advanced 8K manufacturing ecosystem in the world in America, Foxconn Chairman Terry Gou said in the White House.

Earlier this spring, the pair broke ground on an $8.8 billion LCD plant in Guangzhou.

Of course, it's too early to tell if 8K LCDs will play a leading role among next-gen TVs. Chinese rivals, such as BOE Technology Group, are already ramping up production of currently available big-screen panels. If Sharp and Foxconn fail to take the lead in the 8K market, the new factories in the U.S. and China could wind up as nothing more than expensive homes to idle capacity.

Katsuhiko Machida, Sharp's onetime president during its peak period, was fond of saying "LCDs will come after LCDs," meaning that they would never be supplanted, while spending enormous sums on the technology. Those spendthrift ways ended up bringing the company to the brink of collapse.

This time around Sharp is betting on an advanced version of LCD panels. Foxconn's speedy management style will aid Sharp in this pursuit, though the group should also know when to step on the brakes.