Shipping lines plunge into a war of attrition

Ebbing trade growth and low freight rates are pushing Asian shipping lines into a war of attrition. To survive, the companies are scurrying to seal merger deals or strike up loose alliances. But the war has already claimed a major casualty -- South Korea's Hanjin Shipping -- and it may be only a matter of time until another player succumbs.

TOKYO -- In early September, disturbing reports emerged that ships owned by Hanjin Shipping, a big South Korean container line that collapsed in late August, were being kept at sea because of fears that their cargoes would be seized if they docked. The news came as a shock to Japanese shipping companies, in particular.

At the time, Japan's three major lines -- Nippon Yusen, Mitsui O.S.K. Lines and Kawasaki Kisen Kaisha -- were in talks about integrating their container businesses. Container shipping is the core of all three companies, accounting for 30% to 50% of total revenues. But at today's low shipping rates, they are expecting to post combined net losses of more than 500 billion yen ($4.51 billion) for fiscal 2015 and 2016. The three companies knew they could no longer afford to operate separately.

The hardships of Hanjin, which was larger than any of the three Japanese lines, spurred their talks. On Oct. 31, they announced that they will split off and consolidate their container businesses in a joint venture in July 2017. The companies said they expect 110 billion yen worth of annual cost reductions. The new entity will have the world's sixth-largest container carrying capacity.

"Container [shipping] is the basis of world trade. It is an essential infrastructure for our customers," Mitsui O.S.K. President Junichiro Ikeda said when the deal was announced. "However, considering the current business environment, it is very difficult for us to carry out the mission."

The problems facing the shipping industry are a consequence of structural changes in world trade over the last few years that have reduced growth in demand for container capacity.

A good example is Taiwan Semiconductor Manufacturing Co.'s decision in March to build a factory in Nanjing, China, to avoid the cost of shipping chips from Taiwan to the Chinese plants that account for much of its production. Rival semiconductor makers Intel and Samsung Electronics already have factories in China, and are expected to make investments to boost production there, for similar reasons. Chinese manufacturers of liquid crystal display panels, used for TVs and smartphones, are also making large investments so that they will not have to rely on imports.

These developments -- along with many others -- have created the phenomenon of "slow trade," in which global trade volumes grow more slowly than the world economy. 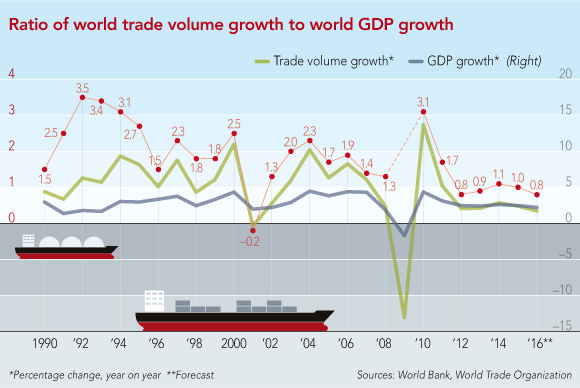 Until the 2008 global financial crisis, trade growth outpaced economic expansion in most years. But since 2012, the two growth rates have been roughly similar. The World Trade Organization forecast in September that global trade volumes in 2016 will increase by 1.7% on the year, compared with projected global economic growth of 2.2%.

Improved manufacturing technologies and rising income levels in emerging economies have reinforced this trend. Companies have become better able and more inclined to make products locally. Narrowing wage gaps between developing and industrialized countries have made the conventional system of producing goods in countries with cheap labor and exporting them to richer nations less attractive. Economies have also become more dependent on online services, for which shipping capacity is irrelevant.

The growing trend toward anti-globalization is also likely to hinder physical trade. In the most dramatic example, U.S. President-elect Donald Trump has said that he will pull America out of the 12-country Trans-Pacific Partnership trade agreement. If protectionism leads other countries to shield themselves, or prompts them to create stronger regional trading blocs, global trade expansion could stall. Takashi Masuda, chief economist at Toray Corporate Business Research in Tokyo, said that Trump's protectionist economic policies will aggravate slow trade, if they are implemented.

But shipping lines have been investing heavily to expand their capacity, seeking greater cost efficiency. The growth rate for supply in container shipping was 8% in 2015, compared with growth in demand of 2%, according to data collected by the United Nations Conference on Trade and Development. As of Nov. 9, a total of 224 ships were on the order books of the top 20 lines, according to shipping data provider Alphaliner. The gap between supply and demand has pushed down container rates, especially on major routes. The Shanghai Shipping Exchange's benchmark China Containerized Freight Index reached 1,300 in 2012. But the index has fallen to less than 1,000 since April 2015. "More shipments mean greater losses," said one shipping industry executive.

The collapse of Hanjin helped tighten the supply-demand balance by removing its ships from the equation, but the market outlook is unclear because Hanjin's assets are being absorbed by other lines.

Rates for bulk carriers, which transport products such as iron ore and coal, have also remained low. The benchmark Baltic Dry Index hit a record low of 290 in February. The index recovered to 1,000 in mid-November, but it remains far below its peak of 11,793 in 2008.

Amid the structural changes in world trade, the driving forces behind industry consolidation have also changed. U.K. maritime and shipping industry research company Drewry said that consolidation before 2008 was driven by "a desire for growth." But mergers in the past few years have been "more about survival and the need to address structural industry problems."

The best example is Singapore's Neptune Orient Lines, which was sold earlier this year to France's CMA CGM, the world's third-largest shipping company. 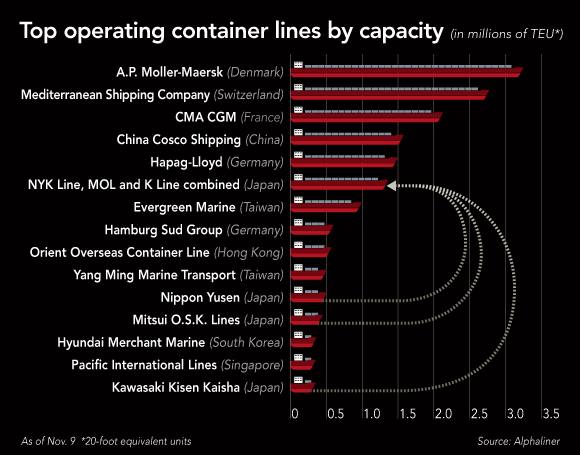 Until 2008, NOL was expanding fast. It acquired American President Lines, the biggest operator in the Pacific container trade, in 1997. In 2008, the Singaporean company made a serious bid for Germany's Hapag-Lloyd, another major container transporter.

After eight months of talks, NOL walked away from that deal as the economic outlook darkened. But NOL failed to maintain cost competitiveness against other major lines, which reaped economies of scale by investing millions of dollars in huge new containerships. The company's acquisition by CMA CGM underscores the difficulties facing midsize container lines in the current protracted downturn. 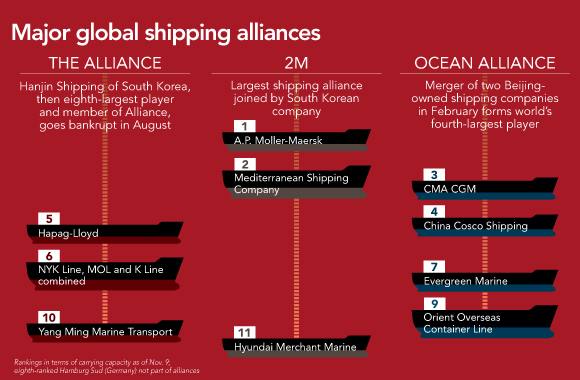 At the same time, many companies are joining loosely structured containership partnerships in an effort to keep their vessels occupied. Denmark's A.P. Moller-Maersk and Switzerland's Mediterranean Shipping Company launched the 2M alliance in 2015. CMA CGM and China Cosco, among others, have agreed to form a partnership named the Ocean Alliance.

Governments are also stepping in to support their struggling shipping lines. On Oct. 31, the South Korean government announced that it will establish a state-backed ship financing company with initial capital of 1 trillion won ($845 million). In July, Korea Development Bank swapped debts owed by Hyundai Merchant Marine for equity, becoming the largest shareholder in the company.

Not to be outdone, the Taiwanese government on Nov. 15 announced a financial relief package worth 60 billion New Taiwan dollars ($1.87 billion) to help local shipping lines including Evergreen Marine and Yang Ming Marine Transport. Both are among the world's 10 largest shipping companies.

With weak industry fundamentals likely to persist, the world's shipping lines seem to be entering a war of attrition, with a focus on achieving economies of scale through acquisitions. It is a war in which further casualties seem inevitable.

Even for the Japanese trio, the joint venture's success is not guaranteed. The new company will have capacity of 1.38 million 20-foot equivalent units, or TEUs. That amounts to 7% of the world market as of October, versus A.P. Moller-Maersk's 16% and Mediterranean Shipping's 14%.

Without effective growth strategies, the Japanese shipping lines may find themselves involved in an unwinnable battle for scale, which might trigger further mergers. In an early and unsettling sign, some Chinese clients have already begun to shift business to the new Chinese shipping company, which charges lower rates than the Japanese lines and presents no language or cultural hurdles.

After the announcement of the Japanese joint venture, Mitsui O.S.K.'s Ikeda said: "It is meaningful for us to be in the top six. I think the environment for container shipping will be different from what we have seen so far."

The conditions for the Japanese trio may not be as favorable as they think.

"Alliances, along with mergers and acquisitions, have been a response to the low-growth environment, where a significant number of carriers have not made money in the recent past," Neil Dekker, Drewry's director of container research, said after the Japanese announcement in October. "We anticipate further consolidation activity, but the industry may need to wait until the earnings impact of the consolidation becomes tangible."

Amid the quest for greater scale, some shipping lines are also extending their reach beyond ports. Kawasaki Kisen, for example, has widened the scope of its auto transport business in Vietnam to include deliveries to dealerships. The company used to unload cars at the dockside and call it a day; now it handles customs clearance procedures, vehicle registration applications, storage, pre-delivery inspections and even simple component installations.

Building new businesses and cutting costs are both vital for growth in this harsh environment. Shipping lines' ability to change tack will be put to the test.