Rebuilding brands key to succeeding in world of fickle consumers 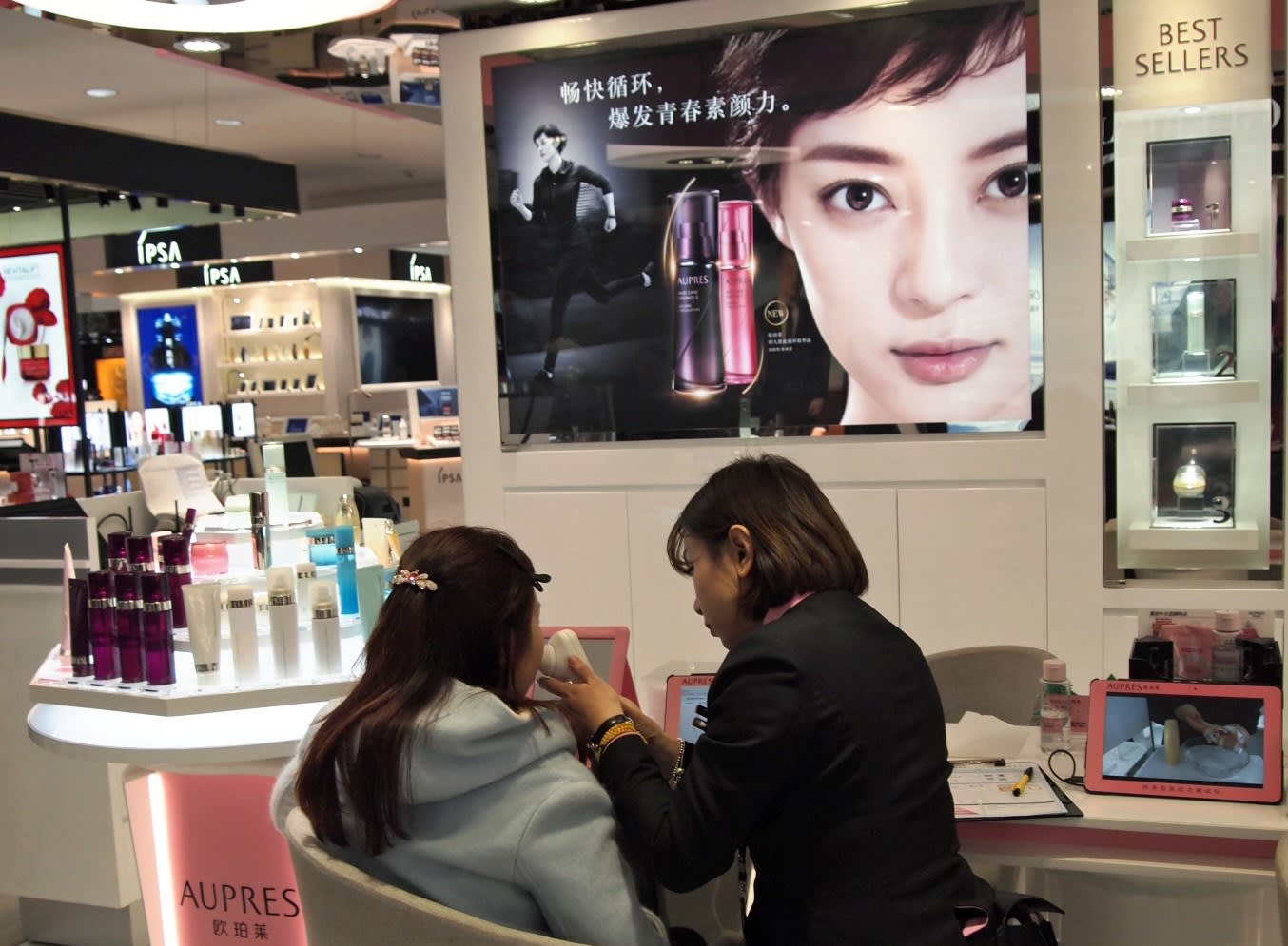 A department store in Shanghai

TOKYO -- Shiseido is at a crucial stage as it strives to be more global. Though the Japanese beauty brand already makes more than half its sales outside its home country, it is struggling to change its distribution model as online shopping takes off.

CEO Masahiko Uotani wants to ensure that the 145-year-old cosmetics giant expands its global presence. Success partially hinges on whether Shiseido can buff up its brands.

This month, Shiseido begins overhauling its Aupres line, which is primarily targeted at Chinese consumers. Over the next 12 months, all of the brand's more than 200 products will be replaced. Shops have been remodeled, and the uniform that Aupres beauty consultants wear has been updated. "There are many customers who are anxiously waiting to see how Aupres will change," an employee at a Shanghai outlet said.

Aupres, which means "nearby" or "next to" in French, was launched in 1994 and has been a pillar of Shiseido's Chinese operations. But in 2012, the brand stopped attracting Chinese women like it once did. The brand's products stayed on the counters of department stores -- their sole distribution channel -- while customers migrated online.

Uotani thought there must be more than competition from the internet behind the brand's drop in popularity. "This is a brand for Chinese people," Uotani thought. "Why are we doing [everything] in Japan?"

Why, indeed, when the CEO himself encourages employees to "think global and act local."

So Shiseido's Tokyo headquarters dissolved its China department. Everything from product development to marketing and advertisement was transferred to China. The new Chinese unit is led by Kentaro Fujiwara, whose extensive overseas experience includes stints in France and the U.K. The office is mostly staffed by Chinese, with the fewest possible Japanese employees sent from Tokyo.

Aupres aims to become a "natural beauty" brand. Through research, Shiseido has redefined the kind of makeup Chinese women like; it aspires to create cosmetics that duplicate the natural beauty of the skin. The brand will launch four lines, each hewing to a certain skin type.

The brand will be buffed up in other ways as well. Beauty devices that incorporate fitness ideas could be developed. Shiseido will also try to build a database of purchase history, skin type and other pieces of customer information that can be tapped regardless of whether the consumer is in a store or making a purchase via her smartphone.

The idea is to use the data to improve the kind of face-to-face beauty counseling that Shiseido has long provided.

Shiseido plans to whittle the number of Aupres outlets from 1,100 to 900. Plans also call for Aupres shops to open in shopping malls, in addition to department stores, and, hopefully, lure younger consumers.

In the year to March 2014 -- Uotani assumed the top post the following month -- Shiseido made 760 billion yen ($6.65 billion) in group sales. In the current fiscal year through December, the company expects to post 940 billion yen in sales. Its overseas sales ratio reached 52% in 2016.

More to be done

Uotani has worked at Lion, a Japanese consumer goods maker, and Coca-Cola (Japan), where he served as president and chairman. He has an MBA from Columbia University in the U.S. But his contribution to Shiseido's bottom line remains limited. In the current fiscal year, the group's operating profit is projected to grow 23% to 45.5 billion yen -- short of the 49.6 billion yen made in the year to March 2014. It turns out that marketing cosmetics is expensive. So is acting locally.

To revive Aupres, Uotani has been emphasizing the importance of building an independent Chinese subsidiary that is responsible for everything from product development to managing the books.

In 2016, the company introduced five regional headquarters -- in Japan, the U.S., Europe, China and the Asia-Pacific region excluding China and Japan. Some of these headquarters are headed by former executives of other global cosmetics companies, like L'Oreal of France and Coty of the U.S.

Shiseido also opened another unit, Travel Retail, and put it in charge of duty-free sales. Uotani's global headquarters oversees all these units.

The Asia-Pacific unit, which basically covers Southeast Asia, was the first to show results.

Peewee Dizon-Bauman joined Shiseido from Anglo-Dutch rival Unilever in 2016 to create marketing strategies for the Senka skincare brand. Bauman, still in her early 30s, suggested that ads for Perfect Whip, a Senka cleanser, should be brighter, saying that in Asia people wash their faces in the morning. Her idea hit the mark. The product suddenly grabbed young women's attention despite being exactly the same as it was before the new ad campaign.

Last year, Perfect Whip became a hit in countries like Thailand and Indonesia.

Perfect Whip easily rubs into a lather -- a characteristic Bauman chose not to highlight in ads. Instead, she wanted to invoke the idea of a fresh morning.

The Asia-Pacific unit moved to Singapore in 2015. Its sales were up 7% in the year through December on a local currency basis. Its operating profit margin increased 1.4 points to 2.2% during the same period.

In the past, Shiseido did not give much importance to duty-free sales, which were relatively small. But the sector has grown rapidly in recent years thanks to a surge in the number of Chinese tourists to Japan who buy goods in bulk.

Shiseido has been strengthening itself by poaching talent. Its global airport campaign that used digital signage for a Shiseido lipstick last year was led by Elisabeth Jouguelet, who had been at an information technology company.

Shiseido has been using tech to boost brand recognition. It now uses "digital walls," displays that change ads depending on people's movements. At its outlets, customers can use tablets to help them choose lipstick colors that complement their faces.

Both the Asia-Pacific and Travel Retail units take advantage of a combination of experienced executives and employees with specialized skills. That is possible thanks to Singapore's rich talent pool. Unilever and Procter & Gamble of the U.S. also have their Asian bases in the country.

For Shiseido to successfully complete its transition to a global company, it needs talent. Whether the company has the kind of corporate value that can attract workers is now being tested.