Silk Road traders make no secret of their preferred currency

KHORGOS, Kazakhstan -- Lisa sells electronics in the King Kong mall on the Chinese side of the Khorgos International Center of Boundary Cooperation. She accepts payment in Kazakh tenge because a lot of her customers come from the other side of the border, but she would rather not. The Khorgos center straddles the Kazakh and Chinese border. Visitors do not need visas to get in. While both currencies can be used, Murat Kharmyssov, who runs a branch of Tsesnabank by the Kazakh entrance, said his bank may soon offer a yuan exchange service.

"Chinese traders are becoming more reluctant to accept tenge as it is losing value against the U.S. dollar," he said. The Kazakh currency, which is pegged to a basket that includes the dollar, euro and ruble, was devalued by 19% in February. This was due to capital outflows sparked by the end of quantitative easing in the U.S. and a weakening ruble in Russia, one of Kazakhstan's major trade partners.

Things have only gotten worse since then, with Western sanctions taking a toll on the Russian economy and oil prices having fallen below $70 per barrel. Kazakhstan is Central Asia's largest oil producer.

The business community widely expects the tenge to be devalued again, although Kazakhstan's central bank has dismissed such rumors.

Khorgos, which links China's northwestern Xinjiang Uighur Autonomous Region with Kazakhstan's eastern Panfilov district, is intended to become a major gateway for Chinese goods to Central Asian markets along the route of the ancient Silk Road. Since the center opened in early 2013, customers have been coming from as far as Kyrgyzstan to snap up the latest deals offered by Chinese traders. 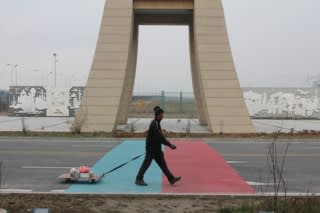 Kazakh trader pulls a cart across the Kazakhstan - China border in Khorgos.

The bustle in Khorgos mirrors the broader strengthening of commercial ties between China and Kazakhstan. Beijing is determined to spur development along the Silk Road economic belt. President Xi Jinping has pledged to set up a $16.3 billion fund to finance infrastructure.

The Kazakh government expects bilateral trade to reach $40 billion in 2015, compared with $28.6 billion in 2013. Most of that will come from Chinese purchases of Kazakh oil.

The rest of the region is just as dependent on the Chinese market: Turkmenistan supplied half of China's gas imports last year, and a new gas pipeline is being built across Tajikistan to China. Today, the bulk of this energy trade is settled in dollars, but the stage is set for the region to see more settlements in yuan.

First, Chinese authorities have to address an overall shortage of the currency in Central Asia. Kazakhstan and China are reportedly working on a new 7 billion yuan ($1.13 billion) currency swap agreement what would replace a similar, three-year deal signed in 2011. In September, the Kazakhstan Stock Exchange started trading the yuan against the tenge.

In Khorgos, Kazakh traders will soon be able to directly deposit their yuan receipts without converting them into tenge, according to Kurbanjan Akhmetov, head of investment and international cooperation at the management company that runs the Kazakh side of the trading center. 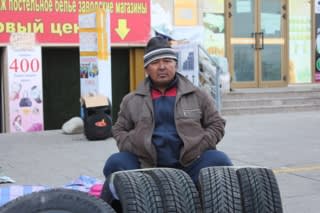 Kazakh customers outside a Chinese mall in Khorgos.

Meanwhile, China's major banks are opening branches on the Chinese side of Khorgos' border that will offer tenge-yuan exchange services. At the moment, Chinese traders still have to change the tenge they earn into dollars first, and then into yuan through informal money changers.

The yuan has a long way to go until it becomes the currency of choice in Central Asia, due to Beijing's capital controls. Yet experimental zones like Khorgos will increase the export potential of Chinese goods, positioning the yuan to play a key role in the revival of the Silk Road.