Singapore Airlines' new India venture with Tata gets a name

SINGAPORE -- Watch out, budget airlines, the big boys have some plans of their own. And at least one of those plans includes a new full-service airline crisscrossing the sky above India. 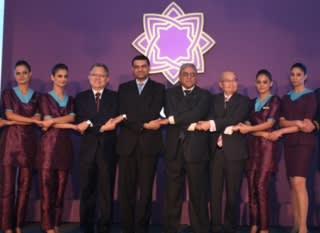 Chairman Prasad Menon of Vistara, fourth from right, and other executives pose for a photo in New Delhi on Monday.

The airline will be named Vistara, a play on the Sanskrit word vistaar, meaning "limitless expanse." It is owned by Tata SIA Airlines, a joint venture between Singapore Airlines and India's Tata Group.

The new full-service airline will take delivery of 20 aircraft from Airbus over the next five years. The first jetliner, an A320-200, will arrive in September. Its first flight will come in October.

Vistara's logo is an eight-pointed star.

The New Delhi-based Vistara will focus on high-quality service.

"Vistara will redefine the way we travel in India," Prasad Menon, chairman of Tata SIA Airlines said. The airline does have international ambitions but first has to either meet the prerequisites of India's so-called 5-20 rule or convince the government to nix the law. The regulation allows Indian airlines to fly international routes only after operating domestically for five years and after accumulating a fleet of at least 20 aircraft.

The joint venture has been lobbying India's government to remove the rule. "There are a lot of discussions going on, and the government is considering, but for now, (we are) only domestic," a Tata SIA Airlines representative said.

The joint venture is the realization of Singapore Airlines' long-held wish to enter India's growing air travel market. "From a global investor's perspective, the Indian aviation sector has a lot of potential for growth," Swee Wah Mak, a Singapore Airlines vice president and Tata SIA Airlines director, said in a statement. "And I am delighted that Singapore Airlines now has a fruitful role to play here."