Singles Day shows that the 'Alibaba effect' has global legs 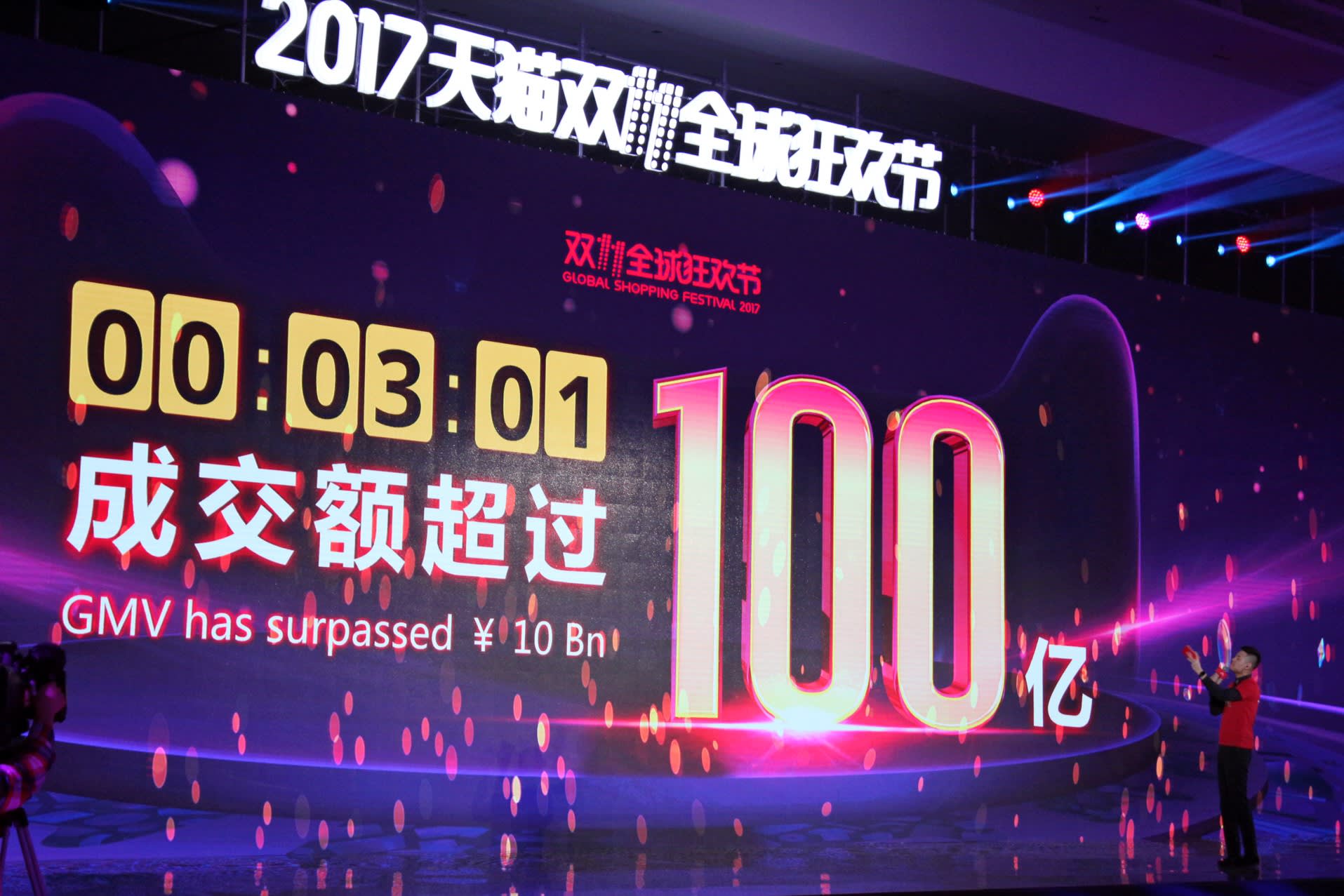 "More than $25 billion of [gross merchandise volume] in one day is not just a sales figure," Alibaba Group Holding CEO Daniel Zhang Yong said on Nov. 12, adding that the figure represents "the aspiration for quality consumption of the Chinese consumer, and it reflects how merchants and consumers alike have now fully embraced the integration of online and offline retail."

The event, called the 11.11 Global Shopping Festival, has grown beyond Alibaba, and its scale is similar to the U.S. holiday shopping season. JD.com, the second-largest Chinese e-commerce company, said on Nov. 11 that its sales for a similar event that began Nov. 1 topped 100 billion yuan.

Jack Ma Yun, the founder and chairman of Alibaba, launched the event in 2009 to help stimulate online shopping. The event's so-called Alibaba effect has changed consumers' shopping patterns and extended its reach around the world.

It began with 27 merchants. This year, more than 140,000 brands and merchants took part. About 60,000 of those were non-Chinese from more than 200 countries and territories. Aside from mainland China companies, merchants from Japan, the U.S., Germany and South Korea were top sellers, Alibaba said.

For Alibaba, which handles 10 billion yuan in transactions on a typical day, handling sales 16 times that, such as on Nov. 11, is costly. "We are just making preparations, as daily transactions of more than 150 billion yuan will become part of our business in the near future," an Alibaba executive said.

According to the United Nations Conference on Trade and Development, online commerce markets for individual consumers in China totaled $617 billion in 2015, surpassing the $609 billion in the U.S. 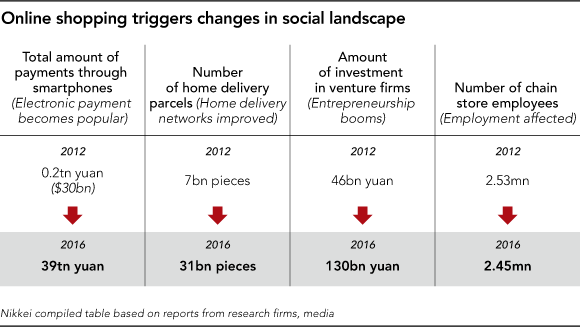 E-commerce accounts for roughly 15% of total consumption in China, up from 4% in 2011, and compared with 7% in the U.S. and 5% in Japan. While Amazon.com's presence is growing, online commerce markets are increasing faster in China than in the U.S. It is also changing employment and payment practices. In China, there are 3 million to 4 million people engaged in "last mile" delivery. Workers earn around 5,000 yuan a month, and most come from rural areas. Creation of these new jobs secures employment opportunities for less-skilled workers from rural areas.

Alibaba and its major competitor Tencent Holdings have a total of 1.2 billion registered payment users. Payments via smartphones soared to 39 trillion yuan in 2016 from 200 billion in 2012.

DIGITAL CONCIERGE Nikkei Inc.'s Shanghai bureau placed 230 yuan worth of orders for such items as Shanghai hairy crab, cigarettes and Starbucks coffee. Thirty minutes later, a driver delivered a pack of cigarettes he purchased at a convenience store and a hot cup of coffee he picked up at Starbucks.

Ten minutes later, a driver from Hema Xiansheng, a fresh-food venture partly owned by Alibaba, brought a live crab. The payments were made through Alibaba's Alipay online platform. Hema Xiansheng shouldered the delivery charge for the crab, while those for the cigarettes and coffee were 16 yuan ($2.40).

Smartphone-based systems of payment collection are an important part of monetizing entrepreneurs' business ideas. They have helped to create an environment for launching businesses such as sharing bicycles, umbrellas and other items. Investment in venture businesses rose to 130 billion yuan in 2016 from 46 billion yuan in 2012.

All of Alibaba's GMV on Singles Day was settled through Alipay, 90% on mobile devices. In Japan, the U.S. and Germany, only 2-6% of consumers use mobile payments, according to a report from the Bank of Japan. In China, 98% of respondents to its survey said they had used mobile payments in the prior three months.

The Alibaba effect is driving business away from brick-and-mortar stores with a vengeance. Some 60% of e-commerce sales in China used to take place in stores. In 2016, at least 70 department stores and big retailers closed. The number of people employed by retail chains stood at 2.45 million last year, down 80,000 from 2012.