MANILA/JAKARTA -- Big businesses, including lenders and convenience chain operators in Southeast Asia, are wooing millions of small grocery stores across the region. They are doing so in a bid to reach consumers outside cities.

A 6-sq.-meter store, locally known as "sari-sari store," in the Philippines' Pampanga Province in the north of Manila is lined with a variety of snacks, beverages and mobile phone prepaid cards. Despite its size, the store offers a variety of services. It even serves meals. Due to its convenience, the store attracts roughly 300 customers a day. Sales reach 3,500 pesos ($79.2) on the busiest days.

Supermarket numbers are mushrooming in Philippine cities. But sari-sari stores remain the main shopping venues for less wealthy consumers. There are around 700,000 sari-sari stores across the country. 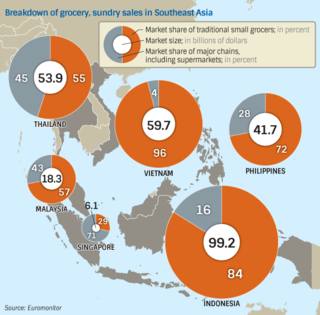 These traditional retailers have deep connections with their communities. Bigger players, such as local banks and convenience store operators, are increasingly strengthening and expanding partnerships with sari-sari stores.

Last August, a sari-sari store on the island of Culion in Palawan Province began working with BanKO, a mobile-based savings bank that also provides microfinance services. The microfinancer is run by the Bank of the Philippine Islands.

BanKO customers can make minimum deposits of 100 pesos and withdraw money at any time. It is the first financial service on the island. Residents there are pleased that they do not have to travel to neighboring islands for banking services any more. BanKO have concluded an agency agreement with more than 2,000 retailers, including sari-sari stores, to reach lower-income consumers through the channel.

Under the contract, each store manages deposits and withdrawals of funds for customers with PCs and receives service fees from BanKO. Many store managers can handle bookkeeping, because they are used to selling goods on credit.

Small stores handle retail for limited areas. But together, these retailers are major sales channels for communities across Southeast Asia. According to an estimate by Euromonitor International, a U.K. research firm, sales of food and daily commodities through traditional small retailers in Southeast Asia's six major countries was roughly $212 billion in 2014. That is a little less than 80% market share for sales of these items across the region. In Indonesia, convenience store operators increasingly work with small grocery stores, called warung. The relationship between the chains and warung is similar to that of franchiser and franchisee. In the city of Kotabumi, a small outlet painted in red and yellow stood out in a neighborhood with a number of grocery stores. The two colors showed that it was one of affiliates of Sumber Alfaria Trijaya, which operates the Indonesian convenience store chain Alfamart. Yellow and red are the chain's signature colors.

The chain since 2008 has been helping warungs within 1km of Alfamart outlets for free. It assists in store management and merchandise procurement. Members of staff at the chain are responsible for warungs, and advise them on how to display merchandise and distinguish themselves from rivals. The warungs also get to take advantage of Alfamart's distribution network.

Roughly 2 million warungs in Indonesia are potential franchise owners for convenience chains. There are a little more than 20,000 convenience stores in the country; the chains feel there is room for more growth.

Modern Internasional, which operates 7-Eleven convenience stores in Indonesia, is planning to partner with a local bank and lend funds to warung owners who are willing to turn their stores into affiliates.

According to Marisa Haruta at Jakarta Office of Japan External Trade Organization, large retailers in Southeast Asia, both local and foreign, need to tie up with neighborhood stores that have regular customers. By doing so, the chains can become parts of communities without trouble.