SoftBank's Son isn't ready to kick back just yet 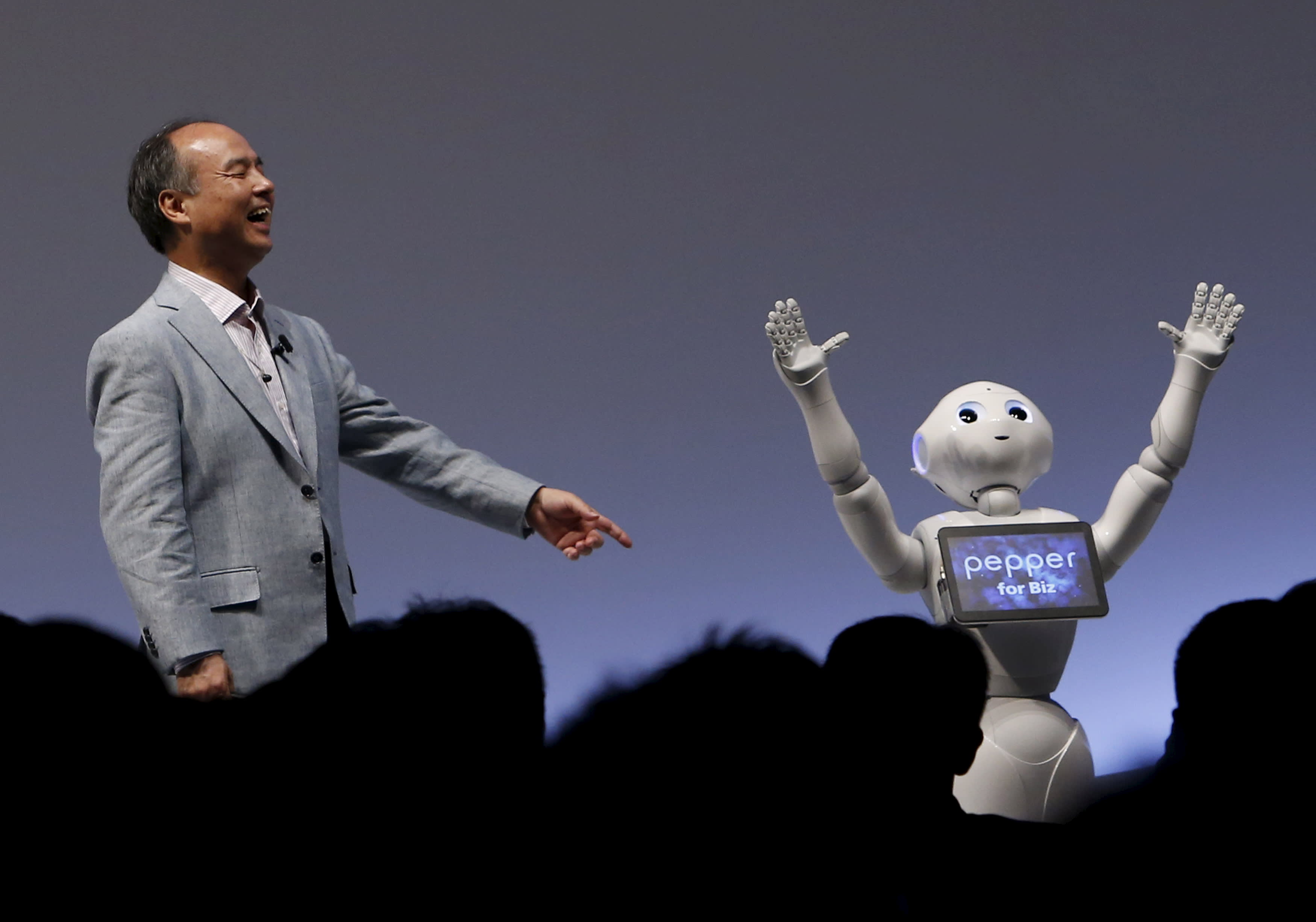 Pepper draws laughter from Son at a 2015 event, but the CEO takes the humanoid robot and all it represents for SoftBank very seriously.
TAKASHI SUGIMOTO Nikkei staff writerJune 30, 2016 12:00 JST | Japan
CopyCopied

TOKYO Masayoshi Son had planned a special surprise for his own 60th birthday next year. "I was planning to invite company executives and friends to a party," the SoftBank Group CEO said at his company's shareholders meeting on June 22. At the party, he would announce that his heir apparent, SoftBank President Nikesh Arora, would take over as chief executive the very next day.

But with just over a year left until the birthday bash on Aug. 11, 2017, Son found that he still had too much drive to retire from the fast-paced, high-powered world of business that he loved. "I asked myself whether I have run out of energy and ambition," Son said. The answer was "no," Son told the shareholders. He felt a desire to do more.

Son, the visionary founder of SoftBank, set the stage for a leadership transition in 2014 when he recruited Arora, then a senior vice president at Google, to serve as his right-hand man. Asked by Son to "plant the seeds" for the future of the telecommunications and internet powerhouse, Arora went hunting for promising startups that can fuel the company's growth.

Leading a group of investment experts called "Team Nikesh" within the company, Arora found several attractive up-and-coming businesses with the potential to be new cash cows for SoftBank -- such as online retailer Snapdeal and budget hotel booking site operator Oyo Rooms, both in India; and U.S. online lender Social Finance.

Son was happy to add the companies to SoftBank's investment portfolio and took every opportunity to crow about them, apparently proving that his decision to recruit the Google executive as his future successor was a wise strategic move.

But then, he suddenly changed his mind. SoftBank announced on its website it would hold a shareholders meeting on June 22, and the agenda included reappointing Arora as a board member. Soon after the announcement, Son decided to scrap his plan to hand over the helm to Arora and immediately informed Arora of his decision. With no remaining prospect for Arora to rise to the top post, Son did not try to hold him back as he decided to leave the company.

SoftBank made the surprise announcement of Arora's departure at 8 p.m. on the day before the shareholders meeting, immediately creating a buzz.

The decision went down well with individual SoftBank investors, who place a lot of faith in Son's strategic acumen and management prowess. None of the shareholders criticized the charismatic leader's abrupt decision at the meeting; instead, he earned applause when he expressed his desire to lead the company for about 10 more years. "I want Son to remain CEO until he's 99," one shareholder said.

Still, corporate governance experts noted that the sudden change in the agenda left insufficient time for shareholders to properly examine it. The meeting also did not shed light on how Arora's departure might impact SoftBank.

SON'S LIFE PLAN At 58, Son is still quite young for a CEO of a major Japanese company, and his now-scuttled decision to retire at 60 was baffling to many observers. Behind his seemingly hasty move to name a successor was a life plan he crafted when he was 19. When he was a young and ambitious future entrepreneur, Son decided to make his name known in the business world in his 20s, accumulate funds in his 30s, make decisive moves in his 40s, complete his business in his 50s and hand it over to a successor in his 60s.

Up until now, Son's career followed the path he had plotted. While studying at the University of California, Berkeley, he sold a portable automatic translation machine he had conceived to Sharp for 100 million yen ($980,000 at current rates). At that time, Tadashi Sasaki, an engineer who was then a senior executive at Sharp, took Son's big talk seriously and helped launch the young man's business career by agreeing to provide him with the money. Known as "Mr. Rocket," Sasaki also served as a mentor for Apple co-founder Steve Jobs.

After graduating from Berkeley, Son returned to Japan and established SoftBank Corp. Japan as a wholesaler of computer programs. He decided to stake his company's future on the budding information revolution. He gradually gained a reputation as an up-and-coming entrepreneur in Japan's information technology sector, which was in an early stage of its development, and built up his cash reserves.

In 2006, Son made a big strategic move when he acquired the Japanese unit of Britain's Vodafone Group to enter the mobile phone business. At the time, Japan was only beginning to recover from the collapse of the dot-com bubble, and his company faced a huge financing challenge as it tried to raise the 1.75 trillion yen needed to buy Vodafone K.K. Yelling, "Think until your brains break down!" to his executives, Son mobilized all of his company's resources to get the deal done.

He managed to engineer a workable financing scheme, combining leverage with investments by group companies.

The strategic aim in buying the company, he said, was not simply to enter the mobile phone market but to acquire a "mobile internet" platform. Foreseeing an era when people would have easy access to the wireless internet, he gambled on his vision about how to ride the wave of this information revolution.

The risky, massive investment soon proved to be a wise move, when an innovation that was to reshape the global IT industry was announced the following year in Silicon Valley. In 2007, Apple unveiled its first iPhone, with Jobs famously saying, "Today, Apple is going to reinvent the phone."

Despite the thick veil of secrecy with which Jobs had covered the development of the iPhone, Son got wind of Apple's plan to create a new type of mobile phone. Although Son had yet to get a license to operate a wireless service, he proposed to Jobs that they negotiate a deal to sell Apple's new phone in Japan.

Son had not yet even taken a glance at the iPhone under development, but he made up his mind when Jobs said something like, "Masa, you will wet your pants when you see it." Son later said he realized Jobs' comment had been no exaggeration when he first saw the iPhone at Apple's unveiling.

As the exclusive seller of the iPhone in Japan for some time, SoftBank staged a powerful drive to make inroads into the Japanese mobile service market by capitalizing on the device's popularity.

Then, in 2013, SoftBank acquired U.S. wireless carrier Sprint Nextel with a total investment of $21.6 billion. Son's plan to also buy T-Mobile US, another U.S. wireless network operator, was thwarted by the U.S. regulator -- forcing him to adjust his blueprint for SoftBank's expansion into the country's wireless service market. But recently, Son said Sprint's business is now on the right track.

EMPIRE BUILDING SoftBank's sales are now close to 10 trillion yen. Armed with a nationwide mobile network in Japan that provides a solid foundation for its business expansion, the company has swallowed up a bevy of promising Asian startups. Son's empire building seems to be close to completion, and he was believed to be serious about his early retirement -- which would allow Arora to take over the company and lead it into a new era of growth. In recent years, Son has often been heard saying that his own abilities and physical strength should not be allowed to hinder SoftBank's growth.

However, he has also said he has not achieved anything.

At a recent lunch, he started talking about a letter written by Sakamoto Ryoma, a revolutionary samurai who played a leading role in overthrowing Japan's Tokugawa shogunate in the 19th century. In a letter sent to his close ally Goto Shojiro, Sakamoto said he was ready to die if he failed to engineer the return of political power from the shogunate to the emperor.

"I shook as I tried to be ready to die," Son said. "I had to ask myself whether I was speaking from my heart when I said I would stake my life on working for the cause. It was brought home to me how wishy-washy I had been."

Talking about these words -- written by a man who was actually killed pursuing his vision for Japan's future -- what Son was trying to say was that SoftBank was not yet "complete."

In explaining his change of mind at the shareholders meeting, Son also said, "Now, the biggest paradigm shift in human history is taking place." Son believes the moment of the singularity, when humans will eventually create an artificial intelligence that can think beyond collective human capacities, is around the corner.

To Son, this means the world is on the cusp of a new information revolution that far transcends the evolution of IT in recent decades. He could not suppress his desire to lead the company to the front line of this revolution.

SoftBank's surprise move to enter the robot business in 2015 was Son's own answer to the era of singularity, he has said. He says SoftBank's humanoid Pepper embodies a first step in his quest to help create a new society where artificial intelligence, capable of understanding and responding to human emotions, can coexist with the human race in a harmonious way.

Talking about SoftBank's robot business, Son said he was enjoying the luxury of pursuing his dream as an entrepreneur in a business that will not start generating profits for a while. He referred to Toyota Motor, the largest company in Japan. Before World War II, Kiichiro Toyoda, the son of Toyoda Automatic Loom Works founder Sakichi Toyoda, saw great growth potential in the automobile industry that was burgeoning in the U.S.

His vision failed to convince Japanese banks or the government, so Toyoda built up a whole new industry on his own. Toyoda Automatic Loom Works started looking for a new business to carve out a future for itself while it was still in good financial shape, and then spent much time realizing its goal.

Son intends to use the genesis of Japan's leading automaker as a key reference in drafting a playbook for building up his own artificial intelligence business.

It seems that the journey of this successful business adventurer will not come to an end any time soon.