SoftBank Chairman and CEO Masayoshi Son with the company's Pepper robot, which can move its head and hands but cannot walk.
June 10, 2017 06:46 JST | Japan
CopyCopied

TOKYO -- By getting its hands on a pair of startups specializing in ambulatory robots, SoftBank Group aims to shore up a technological weak point as it prepares for the future.

The Japanese telecommunications and information technology giant recently agreed to buy Boston Dynamics and Schaft from Google parent Alphabet for a sum thought to total tens of billions of yen, or hundreds of millions of dollars.

SoftBank is known for developing the Pepper humanoid robot, which can sense human emotions via artificial intelligence. But the company needed help in the movement department.

Boston Dynamics, founded in 1992, has developed walking robots and other technologies. It has received support from the Defense Advanced Research Projects Agency of the U.S. Department of Defense. Google bought it in 2013 for an undisclosed sum, possibly $500 million or more. But the duo suffered frictions in such areas as development goals, and the parent had lately been searching for a buyer.

Google also acquired that year Schaft, whose founders hailed from a University of Tokyo robotics lab. Not long after, a Schaft robot won a DARPA challenge involving physical tasks associated with rescues.

Both companies have attracted global notice with their robots' mechanical movement prowess. Boston Dynamics recently drew eyes with Handle, a robot with wheels on two legs that steers with a slalom akin to skiing.

But Google's robotics operations had effectively stalled of late, raising questions over the future of the two companies. Japan's Toyota Motor entered into talks to acquire Boston Dynamics in 2016, and Amazon.com reportedly expressed interest as well. But in the end, SoftBank won out.

SoftBank jumped into the field in 2015 with Pepper, which can move its head and arms but rolls around on wheels rather than walking. The company had tapped Honda Motor, developer of the Asimo humanoid robot, for a partnership in hopes of acquiring walking technology. But the two companies could not come to terms. 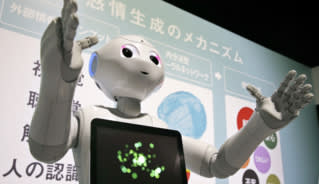 The Pepper emotion-sensing robot may be headed for a bipedal upgrade.

SoftBank's push into robotics owes to the extremely long-term vision of Chairman and CEO Masayoshi Son. The singularity, the point at which artificial intelligence surpasses the sum of all human intelligence, is coming in the next two decades, Son believes.

"All businesses will be redefined" when that happens, Son has said, but he sees the biggest shift coming in workplaces where humans perform simple labor. Traditional blue-collar workers may be supplanted by metal-collar workers in 30 years, he suggests.

Pepper was bullet point No. 1 in SoftBank's preparations for this future. At least 2,000 businesses have adopted the robot. But in many cases it does little more than draw crowds, according to SoftBank Robotics President Fumihide Tomizawa. Without feet, it cannot go up or down any kind of step, for instance, limiting its applications.

Even with mechanical movement prowess at hand, Son acknowledges that the robotics business may not be a moneymaker right away. But the company is nevertheless embarking on the second act of its grand robot strategy, keeping an eye on the progress of AI.

Investors appear optimistic that the new purchases will accelerate growth. SoftBank shares climbed 8% to touch a roughly 17-year high of 9,521 yen here Friday. They closed up 7% at 9,476 yen, giving the company a market capitalization of 10.42 trillion yen ($94.45 billion).