From Zen temple to SoftBank Corp: Miyakawa's rise to the top

CEO takes over at a critical time, facing rising competition and a pandemic TOKYO -- With the promotion of Junichi Miyakawa to the position of president and CEO of mobile phone operator SoftBank Corp., Masayoshi Son has put in place a trusted lieutenant to take charge of SoftBank Group's crown jewel at a particularly tricky time.

Miyakawa, said to be one of only a handful of people who can speak freely with Son, will succeed Ken Miyauchi who had long held the position of CEO and will now take over Son's position as chairman from April 1. Miyauchi has been central to the transformation of SoftBank Corp. from a software wholesaler and publisher to the broadband communications and mobile network operator of today.

"I'm always wandering about, separated from ordinary life. I get so in love with my newest business that I just wander off," the 63-year-old Son once said. "I can do that because I have Miyau-chan," he added, using an affectionate nickname for Miyauchi who is eight years older.

For a time, it was thought that Son, who remains on the board, will not entrust SoftBank Corp. to anyone other than "Miyau-chan."

But Miyauchi had plans to retire by 70. Indeed, he began the search for his replacement in 2019 and eventually picked the 55-year-old Miyakawa who is currently chief technology officer.

An expert in communications technology, Miyakawa joined SoftBank Corp. 20 years ago when the company first entered the broadband market. In 2014, he was sent to turn around loss-making Sprint in the U.S. in which SoftBank Group had a controlling stake. He took the lead in rebuilding the Sprint network that had been plagued with problems.

It is said that Miyakawa urged Son at a board meeting then to reconsider his decision to give up on restructuring Sprint and apologized to Son for having "failed" him. Nearly four years later, Son finally decided to sell Sprint. SoftBank Group Chairman and CEO Masayoshi Son will hand over reform of the mobile unit to Miyakawa, who he hired two decades ago.   © Reuters

Since his return to Japan, Miyakawa as a specialist in communications technology has focused on advancing the development of standards for high-speed fifth-generation communications. He was appointed the leader of Beyond Carrier, a new SoftBank Group business.

Two years ago, he also served as head of MaaS, a joint venture between SoftBank Corp. and Toyota Motor that developed next generation mobility services. To ensure takeup, Miyakawa traveled around the country to promote MaaS services.

MaaS is working with 92 local governments in areas such as the deployment of nurses to depopulated regions and using autonomous driving to take people to stores, and is said to be in negotiations over another 500 projects. On top of all those, Miyakawa is also working on a new project to allow unmanned aircraft orbiting in space to communicate with earth, and is looking into next-generation batteries.

Miyakawa's entrepreneurial zeal truly sets him apart from others. Yet, this was not the path he was expected to take.

Miyakawa was heir to a Zen temple in the city of Inuyama in Aichi Prefecture. At the behest of his father, who was head priest at the temple, he studied Buddhism at Hanazono University, which was established by Myoshinji Temple, a part of the Rinzai sect.

Young Miyakawa had other ideas though. He asked his father for permission to do as he pleased until he was 35. His father obliged, and Miyakawa joined an accounting company.

He then started his own business at the age of 26, with an eye on his time left in the secular world to convince his father that his destiny laid somewhere else. He began by manufacturing and selling small household waste incinerators, after teaching himself everything from the basics to building plastic foam prototypes. He was starting to sell his products to local household goods stores in the early 1990s when the internet took off.

But Miyakawa knew nothing about the internet. He traveled around Gifu University and Nagoya University, and with the help of students there, built a prototype internet service provider device in the corner of a warehouse in Nagoya.

He did not know it then, but that was the first step toward the position of SoftBank Corp. CEO.

Soon after, he unexpectedly received a phone call from Son, who said, "I want you to take the bullet train from Nagoya to Tokyo." When he got to his train car, Son was already there and peppered Miyakawa with questions about communications networks on the journey. The next day he was summoned to a traditional restaurant in Tokyo where Son queried him further on his future plans.

"I want to have something to show for my life 100 years after I die," Miyakawa said. Son replied that he, too, had a plan for posterity -- to build an organization that will last 300 years. He then made Miyakawa a job offer.

Miyakawa joined SoftBank Corp. in the summer of 2001, as the company was about to enter the broadband market with the now largely defunct ADSL system. Its opponent was a behemoth in the Japanese market -- Nippon Telegraph and Telephone Corp. SoftBank was saddled with massive debt for four straight years as the company sent out "parasol squads" to hand out free modems on the streets, among other tactics. 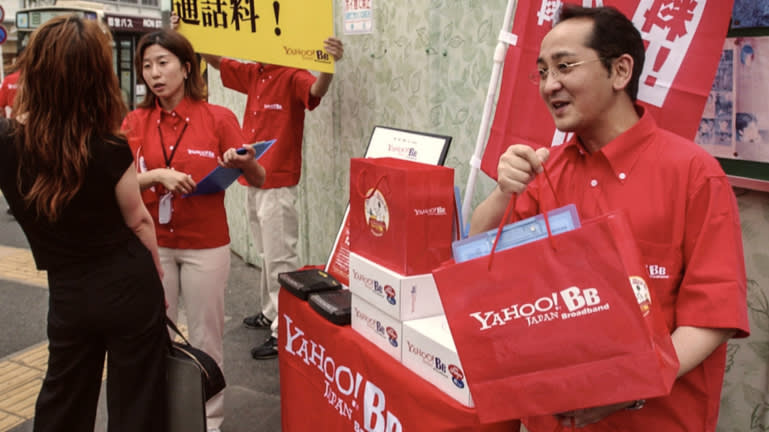 Miyakawa hit the streets to hand out "parasol units" containing modems at a time when the internet was starting to take off.   © Kyodo

Son was impressed by Miyakawa's work ethic, who delivered the broadband project from a cramped room in a multipurpose building. "It was like a chicken coop," Son recalled. The relationship was cemented.

Son continued to turn to Miyakawa in making key decisions, including the purchase of the Japanese unit of British telecom company Vodafone for 2 trillion yen ($9.27 billion at current exchange rates) in 2006 to break into the mobile phone market and the group's move into the U.S.

As Z Holdings, a SoftBank Corp. unit that controls Yahoo Japan, merged with messaging app Line, Miyakawa joined the management team that oversaw the social networking service which became the company's priority for expansion beyond its core telecom business.

But Miyakawa faced a pile of problems. The mobile phone business found itself exposed to increasing price-cutting competition because of Rakuten's entry and the government's call to lower charges.

SoftBank Group itself is facing a pivotal point. While Alibaba Group, which has developed into an investment company, remains the biggest asset of SoftBank Group, the Chinese e-commerce giant is facing growing tensions with Beijing. Alibaba's stock price has seesawed since the end of last year as a result.

The typically bullish Son is now selling assets instead, to build a cashpile in anticipation that the COVID-19 pandemic will drag on. His plan to launch a second huge investment fund remains up in the air.

Son described surviving the broadband battle with NTT as akin to "barely avoiding a fall from a cliff by clinging on with two fingers." Since then, he has faced many more do-or-die battles with Miyakawa by his side.

Now, the man who escaped monkhood will be tested further in this unprecedented time for businesses.