NEW YORK -- As SoftBank Group shed assets ranging from Alibaba to T-Mobile this year, the Japanese tech investor created an $80 billion cash pile that CEO and Chairman Masayoshi Son says was built with the "worst-case scenario" of COVID-19 in mind.

"I saw the possibility of a lot of economic crisis," Son said Tuesday as he kicked off the two-day New York Times DealBook Online Summit. "We have investment in many startup companies ... I was afraid that, you know, maybe some of them cannot make it."

SoftBank itself had enough money and assets, Son told Times journalist Andrew Ross Sorkin, but added, "I thought the cash is very important in this kind of crisis" in order to make moves when a new investment opportunity arises as well as to "protect" the group.

Despite recent vaccine and antibody treatment breakthroughs, Son is "pessimistic" in the short run about the coronavirus pandemic. "In the next two, three months, any disaster could happen," he said. "So, you know, we're just preparing for the worst-case scenario."

Son said he set an internal liquidity goal for SoftBank Group at $41 billion early in the year. "We overachieved that target by almost" double, he said.

SoftBank raised $14 billion this year by pledging to hand over 10% of its shares in Chinese e-commerce king Alibaba Group Holding, and sold $20 billion worth of its stake in T-Mobile following the carrier's long-awaited merger with Sprint. Son's group also has reached a deal with American chipmaker Nvidia to sell U.K.-based peer Arm for $40 billion. 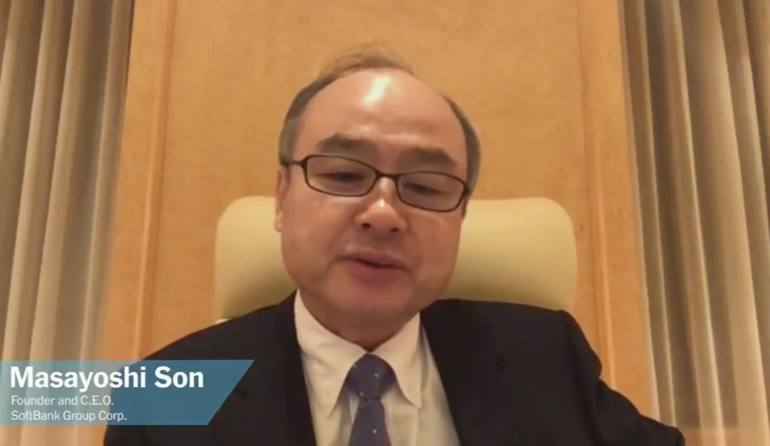 The group is best known for its $100 billion Vision Fund and aggressive investments in tech startups ranging from American ride-share company Uber to Indian hotel chain Oyo. But SoftBank had reason to adjust its strategy even before risks of a pandemic emerged.

At the virtual summit Tuesday, Son said he would rather "accept my stupidity" so as to "learn quickly, and I try not to make the same mistake."

In a strategy rethink, Vision Fund has been writing smaller checks this year in hopes of bigger returns. SoftBank also has quietly built up stakes in more established  publicly traded American tech companies including Amazon and Netflix.

And though recent setbacks have called into doubt Son's thesis of investing for the next 300 years, the entrepreneur remains bullish on artificial intelligence.

Asked how he intends to use the $80 billion, Son said "if we can invest in these AI ... front-end companies, if we can invest more into those opportunities, I will be aggressive." An economic downturn would provide a better price to buy in, he said, as startups might have a harder time fundraising.

"Of course, if our share price dropped down, I want to buy back our own shares," he said, because "I'm a believer of our own company."

The prolific tech investor also offered his take on the security concerns, raised by Washington, surrounding Chinese companies such as Huawei Technologies and TikTok. SoftBank owns a stake in ByteDance, the parent of the video-sharing app.

"I don't think there was an actual risk that much," Son said. "If there is any concern, specifically there should be a discussion of how to mitigate that. And there's always a technical solution without making it too much political."

"It's a sad thing if some service that people enjoy a lot [is] discontinued because of some political concerns of something that's actually not happening," he said.

Son said Zhang Yiming, the founder and CEO of ByteDance, "has no intention" of eroding the privacy or security of citizens from the U.S. and other countries. He just wants to "provide a good, fun and enjoyable thing" with TikTok, Son said.