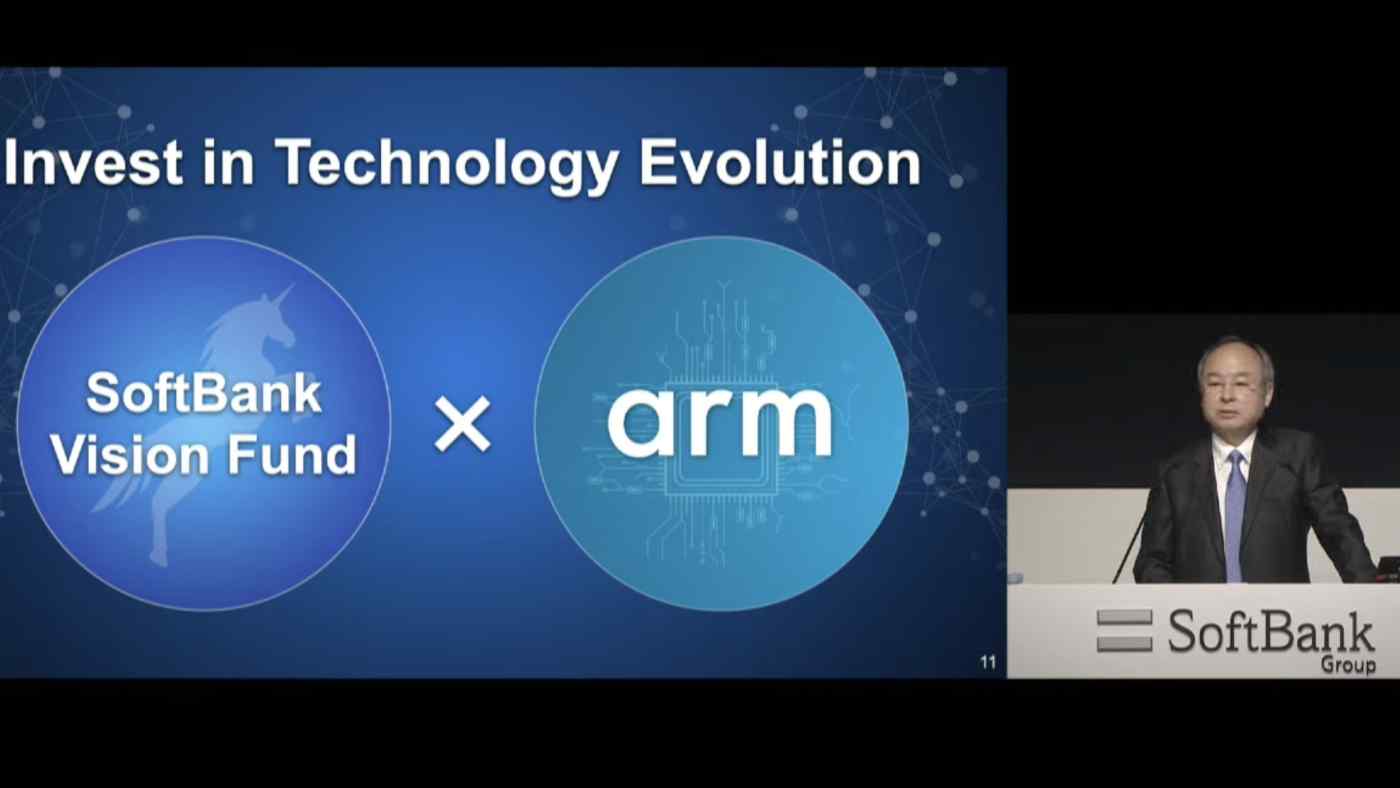 TOKYO -- SoftBank Group Chairman and CEO Masayoshi Son on Friday said he is "studying" a London listing for U.K. chip designer Arm, as he bets on a blockbuster initial public offering to revive a slump the group's stock price.

"We have received requests from various people in the U.K. to list our company in London," he told shareholders at SoftBank's annual general meeting. "We are receiving strong love calls. Our main preference is Nasdaq, but we have not decided yet. I would like to study some more and make a final decision."

SoftBank is pushing for an initial public offering of Arm after regulators around the world shot down its sale of Arm to U.S. peer Nvidia earlier this year. Son stressed that he felt "lucky" that the deal fell through.

"Arm is the engine at the forefront of the information revolution," he said. "It is at the core within the core of SoftBank Group."

Son spent a large chunk of his presentation talking about Arm, the world's dominant provider of designs for semiconductors, explaining how it is increasingly taking market share in areas like cloud computing and cars. "Arm will drive the information revolution of all kinds, not just smartphones," he said. SoftBank Group CEO Masayoshi Son stressed on Friday that he has "no hesitation at all" about his vision. (Screenshot from SBG Youtube)

It was a large contrast to shareholder meetings of the past few years, when Son spent more time explaining the Vision Fund. The shift in tone is a sign of the dramatic change in global tech markets.

SoftBank swung to its biggest ever net loss, 1.7 trillion yen ($12.6 billion), for the fiscal year ended March from a record 5 trillion yen net profit the previous year, as the value of its tech portfolio shrunk dramatically.

The number of initial public offerings have declined by more than 50% globally so far this year, as inflation fears hit investment appetite for tech stocks. Several SoftBank-backed companies, including Chinese drone maker XAG and Israeli trading platform eToro, have either withdrawn or delayed their listing plans.

When he announced results last month, Son said he would slow down the pace of investment. On Friday, he stressed he has "no hesitation at all" about his vision but gave a rare warning to investors. "Be careful if you are buying shares on margin," he said, referring to leveraged bets that prices will go up.

SoftBank's biggest hope is Arm, which it bought for $31 billion in 2016. The company's revenue for the year ended March increased 35% year-on-year thanks to shipments of 5G smartphones and telecommunications equipment. Son has stepped up efforts to clear the path for its IPO, saying in May that it is one of his key priorities. Arm's joint venture in China recently resolved a key management issue that had been a bottleneck for two years.

SoftBank has already bet on a smooth IPO, taking out an $8 billion loan by pledging Arm shares as collateral.

Son said SoftBank is managing market risks by keeping net debt under 25% of net asset value and keeping cash equivalent to two years worth of bond maturities. "Since the market is uncertain right now," he said, "our cash position is much more" than usual.