TOKYO -- SoftBank Group's share price rose more than 5% on Tuesday and edged closer to a record high, after the technology investor reported strong earnings from its Vision Fund on Monday.

The rally kept shares on track for seven straight trading days of gains and brought the rise since the start of the year to 24%, beating the benchmark Nikkei 225 index's 7% gain.

The Japanese company's shares set their record during the height of the 2000 dot-com bubble. 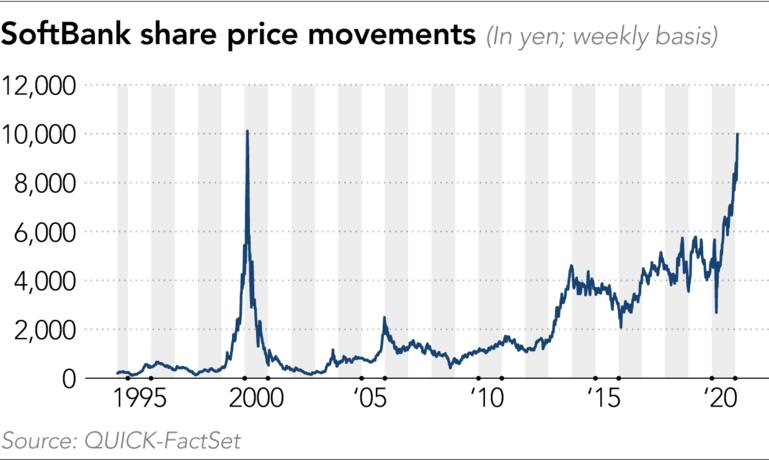 On Monday, SoftBank reported net profit of 1.17 trillion yen ($11 billion) for the quarter ended in December, thanks to investment gains from its Vision Fund investments. Masayoshi Son, the group's chairman and CEO, reaffirmed his confidence in the fund while playing down the significance of its loss-making asset management arm that invests in listed stocks.

In response, some analysts said SoftBank was well positioned to take advantage of the strong appetite for tech stocks.

"In an IPO-frenzied market, where investors are keen to secure pre-IPO allocations, [SoftBank] boasts stakes in [about] 150 investments in private companies ... with dozens getting ready for listing," Jefferies analyst Atul Goyal wrote in a report. He raised the price target on SoftBank's shares from 7,450 yen to 10,770 yen.

Satoru Kikuchi, an analyst at SMBC Nikko Securities, wrote in a research note that "multiple IPOs are expected at Vision Fund's investment destinations, and large profits will continue to be recorded."

Citigroup analyst Mitsunobu Tsuruo noted that among the potential risks are the fact that SoftBank "relies on the talents of a relatively small number of individuals," as well as the restructuring of U.S. office space provider WeWork.