Son has seen the future, and it is powered by chips

TOKYO -- SoftBank Group Chairman and CEO Masayoshi Son showed me a photo on his iPhone and said, "I will never forget this scene for the rest of my life."

The photo showed a group of white yachts in a bay under an endless blue sky in Marmaris, a port town in southern Turkey. Son swiped the screen, and a selfie photo of him in chino pants and a casual shirt appeared.

Several hours before the photos were taken on July 4, Son met Simon Segars, CEO of ARM Holdings, and Stuart Chambers, chairman of the British computer chip design company, on the second floor of a restaurant overlooking the bay. Chambers had arrived in Marmaris, a popular resort town, after receiving an unexpected phone call from Son while yachting with his family in the Mediterranean Sea.

Segars and Chambers may have expected Son to propose a business tie-up between SoftBank and ARM. But instead, Son offered to buy the whole company in cash, pledging to save ARM's brand, head office and management team and increase the number of engineers.

Only two weeks after the meeting, SoftBank concluded the huge deal to buy ARM for 24 billion pounds ($31 billion). In fact, Son had already raised most of the necessary funds before the deal as he began looking to buy ARM more than 10 years ago.

SoftBank is already engaged in mobile phone services in Japan, as well as having U.S. mobile carrier Sprint under its wing. But it decided to buy ARM because the world, as Son put it, "now stands at the threshold of a paradigm shift" to the age of the internet of things, or IoT, the networking of physical devices. ARM will become a platform for this new age, according to Son. 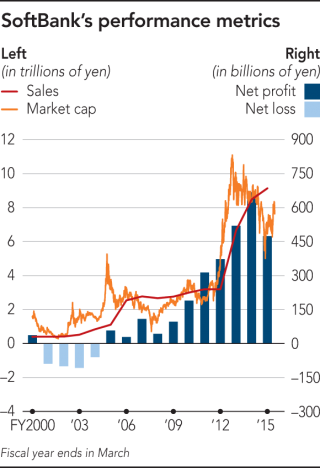 All physical devices that are connected to the internet have computer chips as their brains. These chips will have to be much more advanced, and the batteries to power them must last much longer.

The energy-saving chips designed by ARM are used in over 90% of smartphones, but they will be able to fully show their potential in the IoT age. The acquisition of ARM has been Son's long-cherished wish.

The deal has no direct synergy effects on mobile phone services. "It represents 50 steps ahead in the Japanese game of Go," Son said. "People who put their life into the game should understand what I mean." Son said he was aware that the media and markets do not fully understand the deal.

Son has yet to reveal how to fill the 50 steps. "We are like a boxer in the ring, and it is meaningless for us to explain the process," he said. "No boxer fights while explaining that he first hits a left jab and uses a right straight punch as a finishing blow."

But an analysis of Son's words and deeds indicates a possible path.

To explain why the world now stands at the threshold of a paradigm shift to IoT, Son has kept predicting that the number of transistors mounted on a computer chip will exceed 30 billion -- the number of cells in the human brain -- by 2018.

The prediction stems from Moore's Law. The law, written in a dissertation by Intel co-founder Gordon Moore in 1965, states that the number of transistors on integrated circuits doubles every 18 months.

If ARM presents the 50 Go moves toward the age of IoT when the singularity becomes realistic, Son has already placed a few stones on the board in the form of Pepper, a humanoid robot.

Son suddenly began SoftBank's robotics business in 2015, with his close business partners Jack Ma Yun of Alibaba Group Holding in China and Terry Gou of Hon Hai Precision Industry, also known as Foxconn Technology Group in Taiwan. It was "one of my answers to the singularity," Son said.

"Computers will undoubtedly surpass humans in terms of knowledge and intellectual power in the near future," Son told The Nikkei. "What kinds of computers do people want to live with in such a case? I think computers will possibly have minds."

"I hope in 100 years people will remember that SoftBank gave minds to computers for the first time," he added.

The robots Son has in mind are not merely those that physically support humans or are capable of fast calculation. They will be neither mere manufacturing machines with unmatched accuracy at plants nor "Terminator"-style killing machines.

"Emotion" is the keyword for the robots that Son envisions. Pepper is the first step toward creating it with artificial intelligence.

SoftBank has already taken the second step, setting its eyes on automobiles.

Since Gottlieb Daimler and Karl Benz developed a car with an internal combustion engine in Germany 130 years ago, motor vehicles have competed basically in terms of running, turning and braking. Recently, however, "connected cars" have come into the spotlight, and automakers worldwide are competing to develop them.

SoftBank has approached the field with plans to put "emotions" into automobiles. It has agreed with Honda Motor to develop a car that can read the driver's emotions. The two companies have already developed communications equipment for connected cars.

In the ride-hailing market, SoftBank failed in its attempt to invest in Uber Technologies of the U.S., but has acquired stakes in rapidly growing companies such as Didi Chuxing of China and GrabTaxi of Singapore.

In this way, SoftBank is gradually sliding into the automobile sector, which it has shied away from until recently.

ARM, for its part, seems to see automobiles as its next target after smartphones and is ready to release the Cortex-R real-time processor for motor vehicles.

With global auto sales reaching 100 million units a year, many companies regard the gigantic market as a gateway to IoT. With the acquisition of ARM, Son is set to step on the accelerator for Softbank's IoT business.