Sony Pictures' CEO on the Chinese market: 'mysterious' yet 'terrific'

LOS ANGELES -- Michael Lynton has been in the entertainment business for more than two decades. But even for the chairman and CEO of Sony Pictures Entertainment, the Chinese market is a little "mysterious," given its unique rules and distribution process. On the other hand, he suggested in a recent interview that there is no doubt about China's growing importance for Hollywood.

Q: This year is the 25th anniversary of Sony's acquisition of Columbia Pictures. At the time, some felt the deal symbolized the sale of America's soul to Japan. Today, the focus is on China's increasing influence in Hollywood.

A: First of all, I should say that Sony, as our parent, is not just accepted but beloved. While that may have been the reaction for a minute 25 years ago, (it is) not the case any longer. And although you have a similar situation now with China, it wasn't just about the entertainment assets. It was the Japanese economy. The competitive force of Japan at the time was seen by the U.S. as a threat. 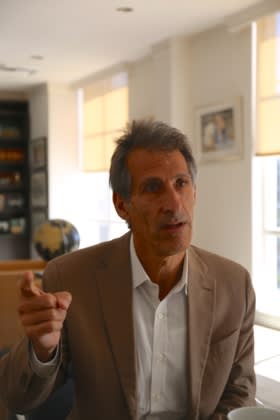 There have been a number of Chinese investors who have kicked the tires and wanted to potentially get into the movie business here in America. Certainly, nobody has come forward to say, "We want to buy a movie studio." They have come to say, "We would like to invest in movies." And some of them have, in a small way. But, for the most part, China has been a real area of growth for the movie business, in particular, more and more for the television business, and I suspect it will actually become a (growth field) for the music business over the next few years.

From a theatrical standpoint, it's been a terrific market for us and has continued to grow, year on year. It's also started to become a home entertainment market. It never had been in the past, when we were trying to sell physical DVDs, because of the piracy problem. Now that there are valid retailers of digital copies, with whom we do business, it is growing significantly.

We have made a pretty concerted effort to make investments in Chinese productions. I think we're up to almost eight or 10 movies now that we've invested in. They're just now starting to be released, so we haven't seen the results yet. What you have seen, though, is some very, very big box office for Chinese films.

Q: Isn't it tougher to sell movies in China than in other markets?

A: It's not tougher. It's a little bit more mysterious. We control our own distribution (in markets like) Russia, Japan, France and Brazil. In China, everything goes through China Film Group. They do all the marketing. They have all of the relationships with the theaters. In addition to the quota, we have to get the pictures through the (State Administration of Press, Publication, Radio, Film and Television) from a censorship standpoint. The actual success of a movie in China is much more out of our hands than it is in any other market. We're very grateful to have access to the market, don't get me wrong, extremely grateful. Whenever one of my colleagues complains about this, that, or the other in China, I always remind them: "Five years ago, we were making nothing in China. Now, we do very well in China."

It's a major, major market for us, and it will become only bigger over the course of the next five or 10 years.

Q: Do you think a Chinese company will eventually buy a U.S. studio?

A: I just don't know. I don't know why they would buy one of the studios. I mean, that's not to say that they wouldn't. I think, if they come to the conclusion that they need to own an American film studio to understand how to access the world market, I could see a day where they come in and buy an American film studio. It's a little bit complicated and it's a different thing from, for example, a Japanese company owning an American studio. That's because Japan doesn't exercise censorship, and the American studio system doesn't respond well to censorship. So I don't know whether that would be such an easy thing to work out.