Sony is solidly in the black after years of restructuring TOKYO Five years after a painful restructuring that saw significant layoffs, staggering losses and a not-so-surprising exit from the PC market, Sony is back. The giant is riding the recovery of its consumer electronics business towards a nicely balanced profit structure, helped along by its financial services and entertainment operations.

For the year ending March 2018, Sony expects to post a record operating profit for the first time in two decades. After entering a period of stable profit growth, the company now wants to chase new growth through innovation. 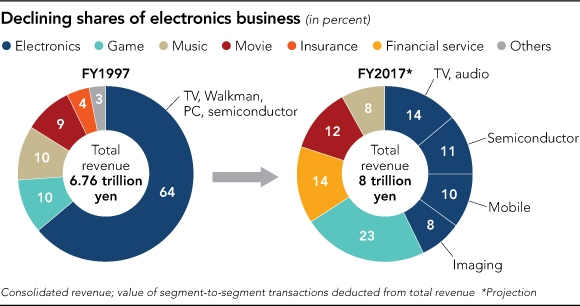 Speaking at a strategy meeting on May 23 at the company's Tokyo headquarters, president Kazuo Hirai underscored the positive effects of his structural reforms, including the television division's return to profitability.

Over the three-year term ending with fiscal 2017, the company now feels strong enough to target an operating profit of 500 billion yen ($4.47 billion) and a return on equity of at least 10% on a consolidated basis.

At a similar meeting in fiscal 2014 -- when Sony had initially projected a net loss -- Hirai had apologized deeply for the poor performance. During the latest meeting, however, the president was in much better spirits, and rightly so: The company is on its way this fiscal year to its highest operating profits since peaking at 525.7 billion yen in fiscal 1997.

Hirai took over in April 2012, after a disastrous fiscal 2011 that saw the company post a net loss of 456.6 billion yen. The new president focused mainly on downsizing, saying that Sony had to change. He aggressively cut jobs in the electric guitar segment and sold off its prized Vaio laptop division.

His shakeup began to show signs of paying off in fiscal 2014 as the television business turned its first profit in 11 years. The smartphone business followed in fiscal 2016.

RIVERS OF REVENUE While restructuring, Sony recorded sizable increases in its recurring revenue businesses, which provide the company with monetary streams from ongoing relationships with customers beyond the initial product purchase. The company's PlayStation system is a good example of this, with users opening their wallets not just for consoles, but for the dedicated streaming game service, which provides a constant flow of revenue.

Sony's streaming game and music services are expected to make up to 40% of consolidated sales in fiscal 2017, compared with 35% in fiscal 2015. According to a top Sony executive, the company depends on recurring revenue streams like these for a large portion of its profit growth.

Earnings growth in the current fiscal year is being driven by its game business. The PlayStation network now has 70 million monthly users, with PlayStation 4 users alone logging a total of 600 million hours weekly on their consoles. To keep the money flowing, the company wants to expand its PlayStation-exclusive content subscription services.

Sony's market capitalization has surpassed 5 trillion yen, more than Hitachi and Panasonic, but far below Apple's 90 trillion yen and Samsung Electronics' 30 trillion yen, a situation that must nag company brass.

As one top Sony executive lamented: "Our company was a market leader in the 20th century, even during the intense war involving the VHS format. But in the internet era, we can hardly be regarded as a main player."

Hirai claims that the restructuring has been just a transitional phase. When asked about Sony's vision for the future, the president would only say that the company was now drafting its third mid-term business plan, starting in fiscal 2018. But although he didn't elaborate, Hirai has been hinting at the next move.

INNOVATE TO GROW Recently, Hirai can be heard stressing the importance of what one Sony press release stated as the company "developing products that exist at the closest point of contact with its customers and [resonating] with them at an emotional level." He believes Sony can do this by wowing customers with a combination of cool hardware tightly bound to its internet-related services -- a strategy that will boost the all important recurring revenues.

Apple, which lately never seems to miss when it comes to product development, has been the master in this respect. Its music distribution services drive growth while its developers continually churn out innovations that consumers can't wait to get their hands on, like the iPhone and iPad.

The burning question facing Sony is whether to focus on safe, stable growth, or take a few risks in order to perhaps reign supreme again as an innovator.

Its a tough call, but one that will have to be made if the company wants to maintain its new shine.