TOKYO -- After stemming the decline in company earnings, Sony President Kazuo Hirai is now channeling more effort and resources into breathing new life into a brand that has completely lost its luster.

Key to his approach is a belief that Sony should be "a company that most values its connections with consumers." But coming up with products that strike an emotional chord with consumers is the real challenge.

One of the biggest draws at this year's AnimeJapan consumer show in Tokyo at the end of March, a huge event in an anime-crazy country, was the booth of popular series "The Irregular at Magic High School."

Sony, which was once engaged in genuine research into supernatural powers, created systems that let visitors enjoy "magical" experiences for the booth.

One visual effects system measured people's "power," where players pointed a "gun" at a wall to capture enemies that moved around in response to their movements.

"It really makes you feel as if you are using magic," said one visitor in their early thirties. "I had absolutely no idea that it was Sony [technology]."

The system was based on Sony's ultrashort-focus projector technology, which can create virtual 3D images on a wall close to the projector and allow the user to move them as if they were using a touch panel.

Sony plans to launch a gadget to be used in conjunction with a smartphone that can project a piano keyboard image users can play on a wall.

Having been "stung" by hearing young consumers say Sony "used to be great," Shigeki Mori, head of the company's Brand Strategy Department, said Sony wanted to show just how many uniquely talented people there are at the company with products like this. 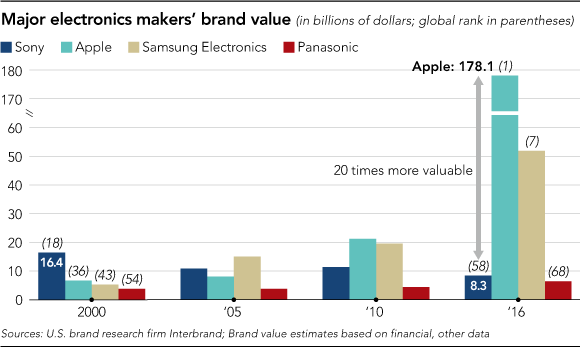 This must be galling for Sony, whose founder Akio Morita built a world-beating consumer electronics brand known for innovative products and clever marketing.

That magic touch is now a distant memory. Since Nobuyuki Idei became president in 1995, Sony has been suffering from a serious drought of hits that has depressed its bottom line.

Hirai himself has been criticized for failing to turn around the company's electronic appliance business quickly enough.

But the structural reform drive he has lead since becoming chief executive five years ago is slowly beginning to produce results. Sony is expecting to report a group operating profit of 500 billion yen ($4.4 billion) for the year through March 2018, close to the past record.

With earnings back on track, Hirai can now afford to spend more time and energy on the brand.

He has stressed that Sony should maintain its commitment to making products for consumers. His mission statement stands in stark contrast with Panasonic's shift toward products for corporate clients, such as batteries for electric vehicles.

Consumer products account for more than 70% of Sony's group sales, so brand strength is vital.

But capturing the imagination of consumers today requires much more than dropping cash on TV ads. Well aware of the importance of more targeted and focused marketing, the company is putting a lot of energy into "grass roots" activities.

Sony is also badly in need of inspiring new products.

Hirai has defined the core of Sony's corporate culture as a fixation with "surprising and moving consumers."

To enhance the company's ability to come up with top products, Hirai has been leading an in-house program to revive the spirit of innovation dubbed "SAP," which may be starting to produce results. The SAP project has led to the development of the "wena wrist" smartwatch. Hirai has touted the product as "a breakthrough idea that has been turned into reality at an amazing speed."

The gadget works with a smartphone and provides features such as email notifications and electronic payment.

The watch has been showing strong sales since it was launched in June last year. It was invented by Teppei Tsushima, a young engineer in only his second year with the company.

SAP projects are selected through in-house auditions. So far, 550 product ideas have been proposed from some 1,500 employees. Eight of them have been turned into actual products like the wena watch.

A senior company executive said that the SAP program may not be making a direct contribution to earnings, but it is doing a huge amount to foster an entrepreneurial spirit within the company.

SME plans to build live performance halls called "Zepp" in eight Asian cities. Satoshi Senoo, president of Zepp Hall Network, the Sony subsidiary in charge of operating the facilities, said they will be designed as "infrastructure for Asia's music industry."

The network will help expand Sony's music business and discover new talent, and the company hopes it will receive a boost in emerging countries with growing numbers of music fans.

To restore its past glory, Sony needs to do more than regain profitability. Developing products that connect with people on an emotional level will be crucial.