Among the "Big Five" Chinese banks, Bank of Communications booked the best results for the year ended in December with a modest 1.03% increase in net income, followed by Bank of China (BOC) at 0.74%, Agricultural Bank of China (ABC) at 0.62%, Industrial and Commercial Bank of China (ICBC) at 0.48%, and China Construction Bank (CCB) with just 0.1%. They all trimmed their dividend payout ratio by 0.3 to 3 percentage points, to around 30%.

"The era of double-digit growth was over. It is only normal for banks' growth to slow," said Chen Siqing, president of BOC, citing the economic downturn, deposit rate liberalization, and the People's Bank of China's six rounds of interest rate cuts since last year as reasons for banks' stunted profitability. "Our profits in 2016 would likely be gyrating at the level of last year," added Chen.

Of all the retarding growth factors, mounting sour loans had the most impact. ICBC saw its non-performing loan and special mention loan ratios rise to 1.50% and 4.36% respectively, while loans overdue by at least three months surged more than 40% from a year ago. Its impairment losses swelled 53.3% year-on-year as a result.

According to estimates by Daiwa Capital Markets, the annualized credit costs of the two largest banks by assets, ICBC and CCB, jumped more than 20 basis points last year. Credit cost, or loan loss provisions to total assets, of the former stood at 0.74%, while that of the latter at 0.92%. With risk-weighted assets growing a lot faster than retained profits, the return on assets of these banks also declined. "Credit costs are our heftiest costs at the moment," said Jiang Jianqing, chairman of ICBC, at a briefing on Wednesday. But he emphasized that the minimal requirement that Chinese banks set aside funds equivalent to at least 150% of bad loans to cover potential losses was a counter-cyclical measure imposed against the backdrop of massive credit growth beginning in July 2009. In other words, Chinese banks have been forced to set aside more for potential loan losses at the expense of earnings compared to their global peers, which only maintain allowances of 40%-60%.

"Last year we mobilized 60 billion yuan ($9.28 billion) to charge off 170 billion yuan of bad loans, and we still managed to retain 277 billion yuan of earnings. Non-performing loan issues are absolutely resolvable," said Jiang, adding that he will consider securitization and a debt-to-equity swap program mooted by Beijing since early March as solutions to the disposal of toxic assets.

Market observers are generally doubtful of the benefits of the debt-for-equity swap initiative. "[It might] simply postpone problems associated with non-performing loans, while stripping banks of their security and asset protection which they currently enjoy as secured lenders," writes Imtiaz Shefuddin, Societe Generale's senior Asia credit strategist, in a research note on Mar. 23. "A large scale NPL for equity swap could probably leave banks as lenders short of capital in the event of write-offs," explained Shefuddin. 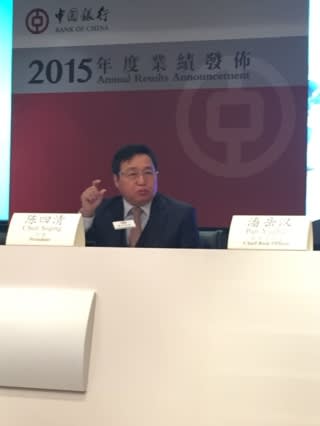 "Non-performing assets will continue to rise," said Song Xianping, risk management director at Agricultural Bank of China, whose NPL ratio at 2.39%, up 85 basis points from a year ago, was the highest among the Big Five commercial banks. According to ABC's annual report, Western China, Bohai Rim and the Yangtze River Delta were the places most exposed to sour loans, while mining, manufacturing, and wholesale and retail -- the most debt-ridden industries -- recorded NPL ratios of 3.14%, 5.45%, and 12.31% respectively.

"Abatement is not on the horizon whilst leverage accumulated over the past few years is unwinding," Yang Dongping, chief risk officer at Bank of Communications (BoCom), told reporters on Tuesday. He also said the majority of BoCom's 40% increase in bond investment was local government debt, a shift that is in line with the government's debt-for-bond swap program unveiled at the beginning of last year. Analysts generally see the scheme as a drag on banks' earnings, given that these assets pay a much lower yield over a longer period.

"Managing a 1% growth in net profits is not easy at all," said Peng Chun, BoCom's president, referring to the flattish results the bank booked for 2015.