SEOUL -- State-run Korea Development Bank said Thursday it would inject new capital into ailing Daewoo Shipbuilding and Marine Engineering as well as swap its loans to the company into equities. 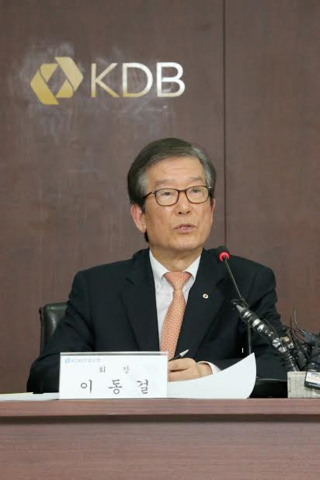 KDB said it and Export-Import Bank of Korea, another policy bank, would open 2.9 trillion won ($2.6 billion) of credit lines to Daewoo Shipbuilding on condition that other creditors agree to a debt-rescheduling program they set. The policy bank are doing what they can to keep the company from going under, which could have wide-ranging impact on the economy.

The fresh aid adds to the 4.2 trillion won lifeline offered to Daewoo Shipbuilding in 2015.

KDB now wants commercial banks to swap 80% of their loans, worth 700 billion won, into shares while extending the maturity of the remaining by five years. For investors holding corporates bonds worth 1.5 trillion won, the bank wants them to swap half of the debt to equities while extending the maturity of the rest by three years.

"Daewoo Shipbuilding has no option but will become bankrupt due to corporate bonds which they should pay back in April, if no special measures were set up," said KDB CEO Lee Dong-geol in a press conference. "We cannot and should not suspend this matter because it is urgent."

Daewoo Shipbuilding posted a net loss of 2.7 trillion won for 2016, as its debt-to-equity ratio surged to 2,732%. Daewoo's financial status and liquidity position worsened in 2016, hit by low new orders and the suspended delivery of drill ships.

"The government showed its strong will to keep the company alive. The key is how much and how quickly Daewoo will rebound," said Choi Jae-hyung, an analyst at Nomura. "Its business relies on macroeconomic circumstances, in particular oil price. It is competitive in building marine plants and LNG [liquefied natural gas] carriers which make profits when oil prices are high."

KDB is the largest shareholder of Daewoo with a 49.7% stake, followed by regulator Financial Services Commission with 8.5% and an employees' union with 2.5%. The bank said that the shareholding structure will change if the debt-to-equity swaps are completed, although the deals are still subject to shareholder negotiations.

KDB said that if creditors fail to agree the swap plan, it would allow Daewoo Shipbuilding to file a pre-packaged plan with the court to improve its financial status. The pre-packaged plan is a kind of court receivership that combines a forceful debt-rescheduling program with financial support.