SEOUL The majority of South Korea's leading companies belong to conglomerates known as chaebol. The founding families of these groups wield practically limitless power in terms of ownership and management, and their corporate empires are sprawling and diverse. 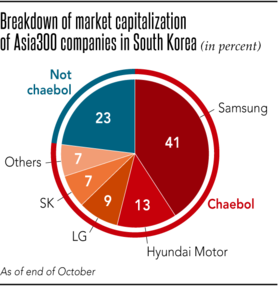 For decades, successive South Korean governments served as active partners in helping these titans to grow quickly. And for good reason: The core companies of many chaebol are export-oriented manufacturers that underpinned the nation's "economic miracle," which took off in the 1970s. Of the 42 Asian300 companies in South Korea, which account for nearly 80% of the country's total market capitalization, some 70% belong to these powerful groups.