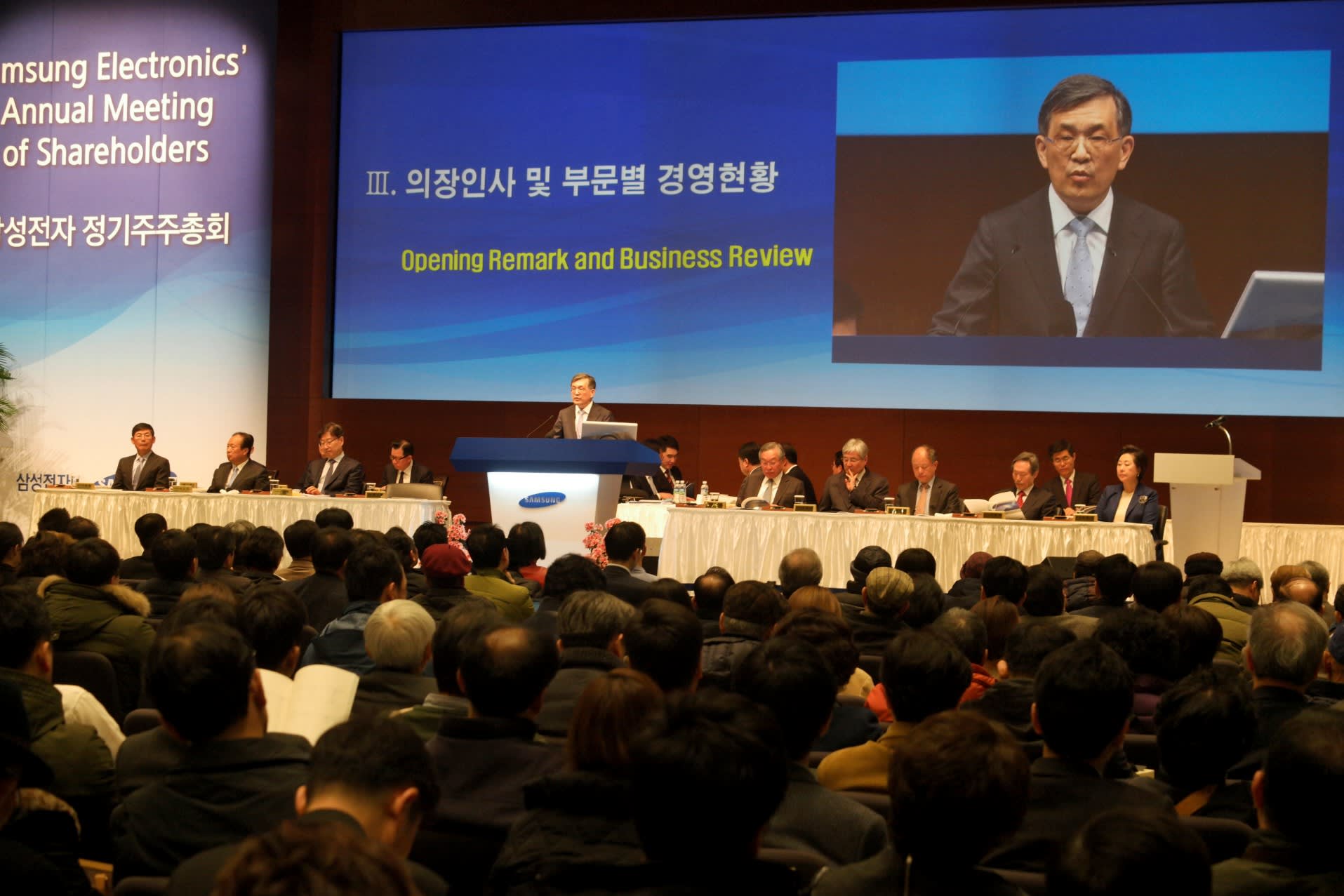 SEOUL -- South Korean investors fed up with sagging earnings and opaque management are making themselves heard at shareholder meetings, calling for corporate governance reform to shine light into family-run conglomerates, known as chaebol.

The atmosphere at Samsung Electronics' annual general shareholder meeting Friday was far from the cheery norm. Investors grumbled at the company's financial report, upset by insufficient explanation and a lack of apology for unimpressive earnings by mobile phone and other operations. Opposition to the traditional approval-by-applause for director appointments forced a laborious vote count. Though all proposed measures eventually were approved, the process took three hours and 20 minutes, around twice as long as last year.

Leaders at LG Display and steelmaker Posco also were taken to task for slumping earnings at shareholder meetings the same day. The meetings this season have ceased to be the typically quick, pro forma events.

Investors' discontent is not unfounded. Share prices at Hyundai Motor and chipmaker SK Hynix have fallen 40% from their highs within the past two years. Samsung has shed 20%.

Impenetrable management structures at Samsung and other conglomerates run by their founding families also leave much to be desired in the way of corporate governance. At over 30% of South Korea's 40 largest conglomerates, owners do not sit on the board, but rather direct operations from outside it. Conglomerates' leaders, their families and affiliated companies control a 55% stake on average, letting them silence calls for reform from the outside.

Recent cases of overreach and unnecessary spending have alerted shareholders to the pitfalls of opaque, leader-dominated management. Hyundai in 2014 decided to invest 10.5 trillion won ($8.84 billion) in land to house its new headquarters, triple the appraisal value. Many criticized the outlay as a unilateral decision by Chairman Chung Mong-koo. A high-profile tantrum by a relative of the Korean Air Lines chairman over a bag of nuts and the ongoing leadership scuffle between members of the Lotte founding family have further exasperated investors in this country.

A major restructuring of the Samsung group last year designed to cement the presumptive successor's hold over the enterprise occasioned a surge in awareness of corporate governance concerns. U.S. hedge fund Elliott mounted strong opposition to the deal, which merged Samsung C&T with Cheil Industries and made the resulting entity a de facto holding company for the group, arguing that the shift benefited only the conglomerate's founders.

The merger was narrowly approved at an emergency shareholders meeting, helped by support from South Korea's National Pension Service. Many criticized the fund's position as contrary to the interests of the country's pensioners. A major U.S. proxy adviser recommended opposing the merger. Some other shareholders supported the deal only out of a sense of patriotism, conceding that Elliott had valid concerns.

Change in the air

Yet despite lingering issues and the slow pace of progress, market players say companies are headed in the right direction. Members of the Samsung group have revised their articles of incorporation to let outside directors hold the position of board chair, previously open only to representative directors, in a bid to bolster transparency. Hyundai at its meeting Friday announced a new corporate governance charter, increasing the board's independence and pledging to advance the interests of shareholders and customers. Samsung Electric and Posco have instituted quarterly dividends.

Pressure from overseas likely will be key in driving further improvements. Foreign investors control only a little over 10% of shares in South Korean companies overall, on par with Japan's corporate sector in the 1990s, when cross-shareholding and corporate payoffs ran rampant.

As corporate founders prepare to hand the reins to successors, many in this country see an ideal chance to institute governance policies on par with those in the U.S. and Europe. The end of conglomerates' run as key drivers of economic growth also has made them more vulnerable to criticism from investors and the public. Companies could find it difficult to hold fast as the winds of change gain strength.