Countries are relying on technology to defuse their demographic time bombs

KUALA LUMPUR Southeast Asia wants to defy Father Time. As its populations age and workforces start their inevitable decline, the region is counting on high-tech remedies to try and turn back the clock, or at least slow it down. 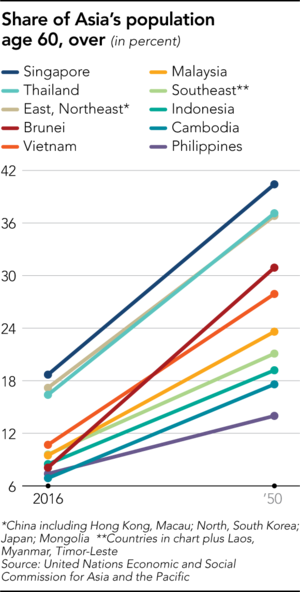 According to a recent United Nations report, populations in Asia Pacific are growing older and at a faster pace than the rest of the world. People aged 60 and above are projected to increase from 12.4% in 2016 to over 25% by 2050. This means there is little time to prepare for the coming strain on health care services.

The disparity in access to health care is also huge, with the number of physicians per 1,000 people below 1.0 for highly populated countries like Indonesia and Myanmar, compared to 1.9 in Singapore, according to the World Health Organization.

These and other factors are forcing countries to rethink their health care strategies. Governments and private sectors in the region are now planning the "hospitals of the future" to deliver health care beyond the wards, employing disruptive technologies like big data analytics and artificial intelligence.

SCALED SOLUTIONS In Singapore, an ambitious project is already underway. Woodlands Health Campus, a huge integrated facility, features two hospitals and a nursing home. When completed in 2022, the 1,800-bed facility will be one of the key components in the country's plan to cater to the future needs of its aging population.

"The Woodlands Health Campus will have to be future-ready," said Gan Kim Yong, Singapore's health minister on April 18.

The government wants the facility to provide "seamless, person-centric care, and to embrace technology and innovation" in a significant move towards value-based services.

But other countries in the region are not as fortunate. Many still do not have national health insurance schemes, forcing governments to subsidize public health care. While the well-off may opt for private health care, the majority visit public hospitals, straining government coffers.

To address this problem, instead of relying solely on more doctors and health care personnel, hospitals have begun looking to technology to cure their ills. For example, cognitive computing is now being employed to manage patient data and diagnosis records, eliminating labor-intensive manual entry.

KPJ Healthcare, another Malaysian hospital group with about 30 facilities in five countries, uses private cloud services to store data, helping cut costs and improve efficiency. Since 2013, the group has digitized all patient records, reducing patient wait times, from registration to dispensary, according to Chief Information Officer Eric Sim, who headed the project.

Cloud computing is also being adopted at public hospitals. The Malaysian government recently launched a data warehouse to connect all public and private hospitals in the country, allowing information to be easily shared. Using a platform developed by state-owned information technology company Mimos, the government has collected data on 2.5 million people. The aim is to gather information on 70 million patients, organized by demographics and clinical and procedural records.

Innovative technologies have also given patients more control over their health. Wearable devices are now available for people with diabetes or hypertension, allowing them to self-monitor and take preventive measures.

As countries develop, the demand for better health care services pushes hospitals to upgrade their facilities, shifting away from tending the sick to offering preventive treatment.

"It makes sense to move from a fee-for-service to value-based care," said Natasha Kwan, director of integrated health care business at IBM's Asia Pacific hub in Singapore, citing the availability of in-house technology.

The tech giant opened a dedicated business unit called The Watson Centre in Singapore last June, aiming to commercialize disruptive technologies in Asia. Leveraging IBM's expertise in cognitive computing and blockchain know-how, the center will assist other sectors, including the aviation and financial fields, in advancing their technological skills.

Kwan said IBM's cognitive computing systems are capable of understanding humans through the senses, learning and experience, but they do not replace humans in decision-making. Instead, this and technologies like it are changing the industry in other ways: Doctors will now be paid for keeping people healthy through preventive medicine, not by profiting from sick patients.

Hospitals in India and Thailand have started using IBM's cognitive computing platform called Watson for Oncology, developed with the Memorial Sloan Kettering Cancer Center in the U.S. Now, physicians at India's Manipal Hospitals and Thailand's Bumrungrad Hospital can use Watson to compare patients' conditions with thousands of other cases and information from medical journals.

Cognitive computing solutions such as this can reduce the time for treatment recommendations from weeks to minutes.

SMART CARE Telehealth systems that connect patients at home to doctors in hospitals are not widespread in Southeast Asia, so new solutions using smartphone apps are springing up.

Doctor2U, a Malaysian company that operates an on-demand house call app, is making it easier for people to seek treatment. Begun in October 2015, Doctor2U has been downloaded more than 100,000 times and serves 15,000 users monthly, said company executive Keegan Flynn.

The app also has a free live chat function for communicating with doctors and pharmacies. Users are promised a house call within 60 minutes from one of over 1,000 doctors registered with the app.

Flynn said that the app has huge potential in Southeast Asia as young people flock to cities, leaving aged parents to care for themselves. Doctor2U is preparing to enter Singapore, Thailand and the Philippines through partnerships with local companies.

The trend may have already started.