SUVs from Toyota Motor are reportedly popular among corporate bigwigs in the Philippines. (Photo by Nozomu Ogawa)

BANGKOK/HANOI -- Southeast Asia's automobile market continues to recover well from a yearslong slump, with the Philippines and Thailand driving solid growth in an increasingly important region for carmakers.

Sales in six major Southeast Asian countries grew 5% on the year to 1.62 million new vehicles for the six months ended June to top 1.6 million for the first time in three years.

Southeast Asia is a bright spot for the industry amid malaise in other major global markets. Chinese sales dropped off precipitously in the January-June half on the heels of a demand surge fueled by tax breaks, while U.S. sales for the period declined for the first time in eight years.

The Philippines led the sales recovery as a boom in consumer spending continued unabated despite fierce fighting between the military and Islamist extremists on the southern island of Mindanao.

Sales show no signs of slowing, reported a confident sales representative at Toyota Alabang, a Toyota Motor dealer near Manila. A particularly strong performer is the Fortuner sport utility vehicle, which can cost more than 1.5 million pesos ($29,715) but is proving popular among corporate executives, the staffer said.

Many are also scrambling to buy new vehicles before the government raises the excise tax as proposed.

Toyota Motor Philippines plans to enlarge its dealership network from 52 to as many as 66 this year. "Demand is picking up even in outlying areas," President Satoru Suzuki noted. "Cars are becoming a necessity."

Thailand is now seeing double-digit growth as well. Demand is rebounding from an early-2016 slump stemming from tax code changes. Consumers are also growing more willing to open their wallets as the subdued national mood that followed the death last October of beloved King Bhumibol Adulyadej starts to pass.

Growth was solid in Indonesia and Malaysia through May, hovering around 6-7%. But June brought a sharp slowdown in the region's biggest and third-largest markets as the Muslim holy month of Ramadan came earlier than last year. Whether sales will get back on track remains to be seen.

Japan's Mitsubishi Motors will begin Indonesian production of a new seven-seat compact multipurpose vehicle in September. The new model will be unveiled at the Gaikindo Indonesia International Auto Show kicking off outside Jakarta Aug. 10.

Exception to the rule

The strength of other Southeast Asian markets makes the recent weakness in Vietnam all the more striking. The price of the Mazda3 sedan, built in Vietnam for Japan's Mazda Motor by Truong Hai Auto, has been cut nearly 10%. At least one dealership offers incentives worth around $2,000 with Honda Motor's CR-V SUV, including parts and even gold.

A 37-year-old in Hanoi bought a Honda City sedan in March, swayed by a 13 million dong ($571) discount -- larger than for comparable models from Toyota or Ford Motor.

Vietnam is set to scrap a 30% tariff next year on vehicles with engines smaller than 3 liters imported from other members of the Association of Southeast Asian Nations. With products set to become as much as 20% cheaper, potential purchasers are holding off. Even Toyota, which leads the market with a 20%-plus share, is reportedly being left with no choice but to jump on the discount bandwagon. 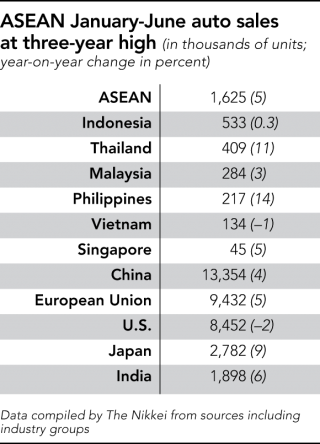 New-auto sales in Vietnam topped 300,000 units for the first time last year after several years of double-digit growth. But sales are sure to dip back below that mark this year if conditions do not improve, an executive at a Japanese automaker said.

Despite brisk domestic demand, the manufacturing side of the industry is struggling in Thailand, the region's top auto producer. Output fell 4% on the year to about 951,000 vehicles in the six months through June.

The main culprit is a slump in exports to the Middle East, a key auto export market for Thailand, as crude oil prices remain in the doldrums. The Federation of Thai Industries could cut its full-year export projection from 1.2 million vehicles to 1.1 million, or even fewer, a senior official said.

This would mean a drop of 6% or more, rather than the currently forecast 3% increase, continuing the contraction trend seen in 2016. The downgrade would also outweigh an expected rise of 60,000 vehicles in domestic sales.

Toyota, which accounts for the largest share of production capacity in Thailand, hopes to minimize the blow by focusing on exports to such markets as Russia and South Africa.