JAKARTA -- More than three months after launching its video streaming service in Indonesia, U.S. based Netflix is still unable to access more than 150 million mobile phone subscribers of Telekomunikasi Indonesia, or Telkom, the state-owned telecommunications company.

"Fortunately, there is only one [internet service provider] in Indonesia blocking us," Netflix CEO Reed Hastings recently said during the Asia Pacific Pay-TV Operators summit in Bali, referring to Telekom, which has cut off access to Netflix since late January due to alleged violations on content and regulatory standards. "Unfortunately, it's the largest." 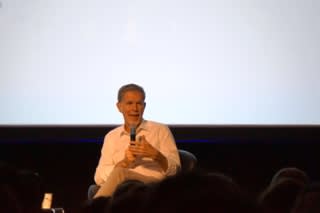 Netflix CEO Reed Hastings talked about the difficulties of the Southeast Asian market at a conference in Bali on April 27. (Photo by Wataru Suzuki)

Southeast Asia, where a third of the population is under 20 and internet users are growing thanks to cheap smartphones, has become a major market for social media companies like Facebook and Twitter. But in a region where everything from credit card use and high-speed internet to censorship rules differ widely by country, video streaming services can be a hard sell. Many players are starting to see local telecommunication companies as the key to tackling these bottlenecks.

"You take a model that worked overseas and you start with that model. And then you start realizing all the ecosystem challenges that exist, particularly in Southeast Asia," said Peter Bithos, CEO of HOOQ, a joint venture between Singapore Telecommunications, Sony Pictures and Warner Bros. "So the telecoms' role in payments, distribution, marketing is a vital part of the equation."

Established in 2014, HOOQ recently partnered with Globe Telecom, the second largest telecommunications company in the Philippines, to co-produce HOOQ's first original drama series based on a well-known local movie "On the Job." Production is expected to start in May.

HOOQ and Tribe, the video streaming service of Malaysia-based pay TV operator Astro Malaysia Holdings, have also partnered with local mobile operators to enable subscribers to pay with phone credit. Malaysia-based iFlix enlists operators as "sponsors" that pay for the service under a bundle plan for a certain period of time.

Netflix, which already has partnerships with telecommunication companies Optus and Telstra in Australia and SoftBank in Japan, may be seeking similar deals in Southeast Asia. "[Telecoms] are helping us understand the content landscape," Hastings said, which have led to the production of original programs in these countries.

Video streaming, which eat up more data than text and pictures, is an important driver for telecoms looking to boost data revenue. XL Axiata's Chief Financial Officer Mohamed Adlan bin Ahmad Tajudin said video streaming is partly why the company is aggressively expanding its fast fourth-generation LTE network across the archipelago. "We are not so bullish about 3G, because the experience [of watching online videos] is not the same," he said.

Industry observers agree that it will take some time before video streaming becomes a major profit generator in Southeast Asia. Paying for content in the Philippines is still a fairly novel idea because pirated DVDs are widespread, said Globe Telecom's CEO Ernest Cu.

Still, Cu said video will be "the killer app" that will drive demand for high-speed internet over the longer term. "And we are the gateway to being able to build the consumer service."

"We are already starting to see the bundling of content and subscription plans...the role of telecom companies will grow and grow in a lot of these markets," he said.