SHANGHAI/DALIAN, China -- Chanel and other European luxury brands are cutting their prices in China, in order to slow down the stream of customers flocking to cheaper overseas stores, leaving boutiques in mainland China empty.

Luxury brand sales in China have lost steam after years of breakneck growth. President Xi Jinping's corruption crackdown is in part responsible for the slowdown.

Another factor behind the sputtering sales is the wide gap between luxury prices in China and other countries. Wealthy Chinese consumers, having caught on, now flood stores overseas to take advantage of lower prices.

High-end brands would rather see Chinese customers buy at home, to justify the huge investments they have made in the mainland, and to pay for the increasingly expensive store rent and manpower costs here. So prices are being cut.

A sales clerk at a Chanel shop at Plaza 66, an upmarket Shanghai shopping mall, said the 3 bags that were initially marked down, were already all out of stock. The store was almost the only one in the mall to have plenty of customers. The mall is usually deserted, even on weekends these days. 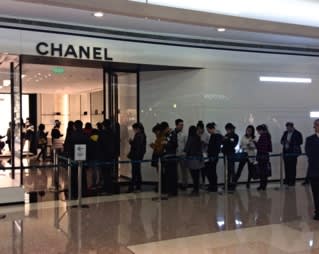 Customers wait in front of a Chanel shop in Shanghai.

Since March 18, when Chanel lowered the prices of its classic bags in China, there has been a constant line of 30-50 shoppers in front of the store.

Chanel says that this is a price "adjustment" to eliminate a growing price discrepancy between its Chinese stores and those overseas.

The brand will raise prices in Europe in response to the weakening of the euro. Prices on all of its fashion goods will be adjusted over the next year, the company said.

A 20-something waiting in the Chanel line said she already had two bags from the company, which she bought online from a purchasing agency overseas, unrelated to Chanel, and had delivered by mail.

Buying from such businesses, however, entails the risk of ending up with fake products. Were it not for wide gaps between prices in China and those in other countries, the woman said she would be happy to buy such items from physical stores at home.

Prices of all kinds of imports, from luxury goods to daily necessities and food, are high in China because of tariffs, value-added tax and distribution costs. Some luxury goods at stores cost 50-80% less in Europe than they do in China.

This situation has led many Chinese tourists to go on spending sprees during trips abroad. In a report published earlier this month, Bank of America Merrill Lynch predicted that in 2019, Chinese tourists will spend $264 billion on shopping overseas.

Since 2012, China has been the world's largest outbound tourism market in terms of number of travelers, and total spend. Last year, 109 million Chinese traveled abroad and spent $164 billion.

The number of Chinese traveling overseas and the amount they spend has acres of space to grow. Only 5% of China's vast population has passports. The nation's so-called "Generation Y," people born in the 1980s and 1990s, constitute 62% of the Chinese traveling abroad.

These tech-savvy consumers collect information about shops, goods and prices from around the world on their smartphones. Shopping is an important factor in where they decide to travel.

A woman in her 50's shopping at Plaza 66 wore a Jaeger-LeCoultre watch. She bought it for the equivalent of about 70,000 yuan in Hong Kong. It would have been even cheaper in Europe. The same watch sells for 110,000 yuan on the mainland.

"If they lowered prices like Chanel has, I would buy such items in China," she said.

Luxury brands officially say their price cuts are to correct cost differences between regions that were created by a cheaper euro. This is a half-truth. Price discrepancies were left untouched for years in China until sales began to falter.

Makers of luxury goods are reluctant to slash prices in response to sluggish sales because such moves can hurt brand value. They can avoid brand damage by claiming the currency market is behind their price adjustments.

"Luxury brands have traditionally been cautious about price cuts," said Andre Suguiura, CEO of LifeStyle Logistics in Shanghai, which provides logistics services for fashion brands. "Once you start holding sales, your customers just wait for the next round of price cuts."

Patek Philippe, a high-end Swiss watch brand, on Feb. 10 reduced the prices of its wristwatches by 3% in most of the Asia-Pacific region, 7% in Hong Kong and 5% in Switzerland. At the same time, the company raised prices by 7% in the eurozone.

The Swiss franc has soared since Jan 15, when the country removed a 1.2 per euro cap on exchange rates. The rise in the currency's value should in theory prompt the brand to raise prices in Asia.  But it has actually marked down prices.

A joint survey by Bain & Co. of the U.S. and Altagamma, the trade association for Italy's luxury industry, found that China's market for such goods posted growth of more than 20% until 2012. It then slowed sharply to 2% in 2013. The market even contracted by 2% in 2014, according to the survey.

Now some upscale brands have started slashing prices in China. Will others follow suit?