As China's middle class began to develop more than three decades ago, Wang founded a travel agency that focused on individuals rather than group travel. He then launched China's first budget carrier, Spring Airlines.

Now his travel company is expanding into hotels across Asia.

When Wang spoke with the Nikkei Asian Review last year, he made the candid, somewhat modest, yet still truthful observation that he is a cautious businessman.

He said he decided to open a hotel chain after a friend joked that Spring Airlines was sending spend-happy Chinese travelers overseas, and helping foreign businesses make money.

The company has already opened one hotel near Nagoya in Japan's Aichi Prefecture, and it plans to expand the chain to 15 to 20 locations over the next three to five years. It is also eyeing the South Korean and Thai markets. A Spring Airlines crew member sells food onboard an Airbus A320 aircraft near Shanghai.   © Reuters

Today, Spring Airlines is China's largest low-cost carrier, and the 73-year-old Wang is a popular figure in China's business community and in the country's media.

CARRY ON In the early 1980s, while working as a civil servant in a small district in Shanghai, Wang predicted that more Chinese would want to travel, and so he founded the Shanghai Spring Tour travel agency, and focused on individual travelers rather than group tours. His hunch proved correct.

People's incomes grew as China opened up under government reforms. There was also a noticeable distaste growing over group travel and tour guides. Shanghai Spring Tour seized on this trend, offering individual tickets and hotel rooms in Beijing, Xian, Shanghai and elsewhere across the country. It eventually became China's largest private-sector travel agency.

Then came Wang's second big move: aviation. He founded Spring Airlines in 2004 when the Chinese government was opening the sector to private businesses. 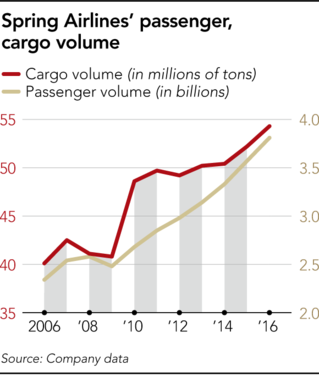 He counted on what turned out to be two important changes in travel habits: The country's travelers were shifting from rail to air; and people were starting to venture abroad. Spring Airlines was a success almost immediately.

"It's cheap, so I always choose Spring Airlines when my flight is less than four hours," said Li Xian, a 28-year-old from Shanghai who takes the airline for her twice-a-year trips to Bangkok.

A roundtrip flight between Shanghai and Bangkok is priced at about 2,600 yuan ($397) on state-owned China Eastern Airlines, 2,500 yuan on Thai Airways International, and 1,700 yuan on Spring Airlines, according to Ctrip, a flight-reservation website popular among young Chinese.

Considering that the average monthly income in China is 5,000 yuan -- and 8,000 yuan in Shanghai and other urban areas -- the price disparity between airlines makes a huge difference, a difference big enough for people to put up with some inconveniences.

"I had to wait for more than five hours in the plane once, but it can happen to any airline," Li said. "Spring Airlines is cost effective, so I'm satisfied."

Spring Airlines began operations when just 30 million Chinese people -- primarily the affluent on package tours -- traveled overseas a year, and China's gross domestic product was only one-sixth the size of the U.S. and half that of Japan.

But 12 years later, by 2016, the number of annual overseas-bound travelers had ballooned to 120 million, with many of these known as fully independent travelers, or FITs -- those who travel outside of package tours.

During this time, state-owned airlines concentrated on protecting their dual vested interests of package tours for the rich and profitable domestic flight routes. Spring Airlines, meanwhile, opened overseas routes to Japan, South Korea and some countries in Southeast Asia. In 2010, the carrier launched a direct flight between Shanghai and Ibaraki Airport, about 100km north of Tokyo. The airport is obscure even to most Japanese. By the end of last year, 70 of its 164 routes connected mainland Chinese cities with overseas destinations -- including Hong Kong and Taiwan.

This international strategy has helped spearhead China's overseas travel boom and has shielded the company from domestic constraints.

Many Chinese companies, both state-owned giants and private businesses, have firmly tied their fates to the country's economy and domestic regulations.

For example, Sany Heavy Industry, a maker of construction machinery that was once celebrated as the pinnacle of the private sector, suffered after the Chinese government slowed its infrastructure investment a few years ago.

Baidu, the search engine giant, enjoys a huge market share in China, in part because the government prevents Google and other outside services from entering the market. Baidu is not competitive outside of the country.

Both Baidu and Sany remain dependent on government policies, which can be a disadvantage.

One of the aims of opening hotels overseas has been to prevent a decline in the airline's passenger traffic. The airline hopes to keep seats on its planes full by providing accommodations in Japan, which is facing hotel room shortages and rising prices due to an increase in foreign tourists.

But Spring Airlines is still facing some challenges. Wang was correct in his prediction that the number of independent travelers would surge, but this surge has created competition as many state-owned airlines and foreign low-cost carriers enter the Chinese market.

Spring Airlines' net profit fell 25.2% in the first half of 2017 to 554 million yuan compared with 740.1 million yuan in the same period a year earlier. Its net profit for the full year of 2016 fell 28.4% from the previous year to 950 million yuan, marking the first full-year profit decline since 2011, when the carrier began disclosing its earnings as a Shanghai-listed company.

Low-cost carriers stay profitable by maintaining high passenger-load factors, which make up for their inexpensive tickets. Spring Airlines' load factor for domestic routes stood at 94% last year, but the figure for overseas routes fell to 87% due to increasing competition.

In March, Wang handed over the post of chairman to his eldest son, Wang Yu. The elder Wang will continue to preside over the group's management, but is expecting a smooth transfer as his son takes charge of the airline, the group's core unit. (Wang Zhenghua currently is the chairman of Shanghai Spring Tour, which owns a roughly 63% stake in Spring Airlines in its role as a holding company.)

Wang Yu, 46, who has an MBA from Southern Illinois University and previously worked at Roland Berger, a strategy-consultant company, joined Spring Airlines in 2008 as vice president.

The soft-spoken and mild-mannered younger Wang is eager to transform the company, saying that Spring Airlines has been showing signs of bureaucratic creep over the 13 years since it began operations.

He also sees the carrier as an information technology company and aims to speed up digitization of its operations, such as using data to analyze passenger preferences and proposing customized travel plans. A younger, digital-savvy generation is making up a larger portion of China's middle class.

WELCOME CHANGES Personal consumption in China continues to expand, and spending on overseas travel is projected to grow from $59.8 billion in 2011 to nearly $200 billion in 2030, according to figures cited recently by the Thai Chamber of Commerce. 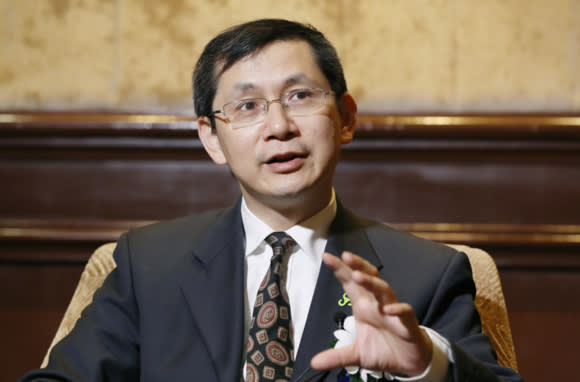 Zhang Xiaoyun, an analyst at Industrial Securities, a Chinese brokerage, wrote in a report this month that Chinese citizens travel by air 0.26 times a year, only one-tenth that of Americans.

With the number of price-conscious individual travelers expected to rise, Zhang said low-cost carriers will be the biggest beneficiaries. He also expects that Spring Airlines' net profit will post year-on-year growth of 26.7% in 2017, 31% in 2018 and 36.9% in 2019.

Despite the positive forecast, the airline is facing fierce competition. Malaysian discount carrier AirAsia announced in May that it will establish a budget airline in China jointly with state-run conglomerate China Everbright Group, and Japanese rivals such as Jetstar Japan and Peach Aviation are expanding routes between the two countries.

And low prices are no longer enough to attract customers.

"Competition is good for customers, not only in China but elsewhere," Wang Yu told the Nikkei Asian Review in a recent interview. "On the other hand, we have to work harder [to maintain] our competitive advantage."

"Budget air is the future of the short-haul market," he said. "Today, no-frills carriers [in China] only occupy about 8% of the market, compared with 50% in Southeast Asia. There is huge potential."