Sprint is the No. 4 wireless player in the U.S.; it was ranked third when SoftBank acquired it.   © Reuters
YUICHIRO KANEMATSU, Nikkei staff writerNovember 6, 2017 15:45 JST | Japan
CopyCopied

The moves amount to Plan B for Sprint, after negotiations on a merger with rival T-Mobile fizzled.

Altice, a global telecom and media group headquartered in the Netherlands, will gain access to Sprint's network, allowing it to provide wireless services in the U.S. as a mobile virtual network operator. The cable company, which also provides Wi-Fi services and content, already has some 5 million customers in the U.S.

For Sprint, the network-lending arrangement promises stable revenue. The carrier could also take advantage of Altice's infrastructure to upgrade its own mobile services. SoftBank to increase stake in US subsidiary Sprint

SoftBank, meanwhile, intends to increase its stake through the market, subject to favorable conditions. The Japanese information technology group currently holds 83% of Sprint and has said it will keep its ownership of outstanding shares below 85%.

Sprint's mobile infrastructure is "central to our vision of ubiquitous connectivity," SoftBank Chairman Masayoshi Son said in a statement.

The T-Mobile merger talks hit a dead end over the weekend. Representatives from both carriers' parents met in Tokyo but could not come to terms, with each side demanding control of the merged entity.

Timotheus Hoettges, CEO of T-Mobile parent Deutsche Telekom, officially announced the end of the negotiations after meeting with Son on Saturday. 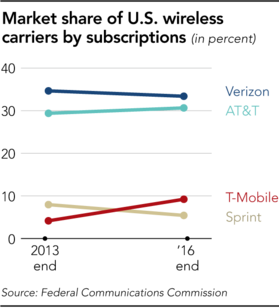 Earlier, on Oct. 27, SoftBank's board had resolved not to let the German group own a controlling stake in the new company. It was SoftBank that suggested calling off the talks.

T-Mobile President and CEO John Legere on Saturday stressed that a merger would have to "result in superior long-term value for T-Mobile's shareholders."

Sprint President and CEO Marcelo Claure issued a statement the same day, saying the talks failed even though both sides recognized "the benefits of scale through a potential combination."

The dashed merger hopes left two options for Sprint: embrace other new partners or attempt to rebuild alone. The carrier has looked to cable companies in the past -- attempting to strike up a partnership with U.S. player Charter Communications.

Sprint is scrambling to recover lost ground. When SoftBank completed its acquisition in 2013, the carrier was ranked No. 3. But T-Mobile has racked up new subscribers and nudged Sprint into fourth place.

For the past three years, Sprint has posted losses. It managed a return to the black in this year's April-June quarter, but logged a $48 million loss for the latest term through September.