COLOMBO -- Textiles are already Sri Lanka's No. 1 export, but the industry is boosting growth by updating equipment and training staff.

Benefiting from a highly productive workforce, extremely competitive maritime transportation costs and an excellent location, the island nation could come to rival Bangladesh, Myanmar and other established Asian textile hubs.

Foundation Garments is one of Sri Lanka's big players. In one of its sewing factories, roughly three hours' drive from Colombo, about 600 workers produce women's underwear for major U.S. brands such as Calvin Klein, Hanes and Victoria's Secret. The factory is filled with rows of commercial sewing machines.

"We use the latest production equipment," said the manager of the factory. 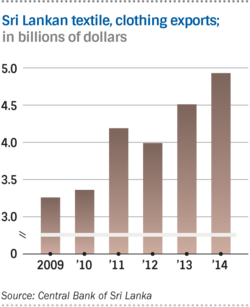 This location makes about a million pieces of underwear a month. Finished garments are checked carefully through visual inspections and detection machines. The task ensures no broken sewing needles, or other unwanted objects, are mixed in with the clothing.

Boosting productivity is also a key focus at the factory. Workers are placed in groups of 16. The daily output of each group is posted inside the facility for all to see. The data is used to reward productive workers. Groups with strong results receive bonuses. Many workers have stayed at the factory for 10 years or more.

The factory's high retention rate is likely due to efforts to create a good work environment. For example, green, yellow and red flags are used to indicate the condition of staff. If a worker's concentration is lagging and the number of mistakes has increased, the supervisor raises a yellow or red flag by their work station. This signals that the worker should take a break. The factory also stations full-time nurses in its break rooms.

Key to achieving the ambitious goal is expanding the lineup of products designed by the company. This will allow Foundation Garments to move away from being a subcontracting company and toward providing high-value-added textiles. With this in mind, the company has formed a design team at its headquarters and started presenting original designs to U.S. and European brands.

Sri Lanka has about 300 textile companies. Together, the producers directly employ about 300,000 people. The industry accounts for one-fifth of the country's manufacturing jobs. MAS, the biggest Sri Lankan textile producer, employs roughly 55,000 people.

Textiles brought in almost $5 billion in 2014. The government is looking to lift the figure to more than $8 billion by 2020. To make this a reality, Sri Lanka must narrow the gap with Bangladesh, the world's second biggest textile producer behind China.

A survey by the Japan External Trade Organization shows that the basic monthly wage in Colombo stands at $161, compared to $100 in Dhaka. But Sri Lanka makes up for its higher labor costs with very competitive harbor charges and shipping fees. Container freight from Sri Lanka to Japan, for instance, is about 40% cheaper than from Bangladesh to Japan.

In addition, the country has been working to improve the labor environment in its textile factories. Efforts started after the collapse of a sewing plant killed over 1,000 people in Bangladesh in 2013. The accident highlighted the terrible work conditions among textile producers.

"U.S. and European apparel companies are looking for trustworthy subcontractors that they can feel safe about associating with," said Etsuyo Arai, a researcher at Jetro's Institute of Developing Economies. "There is a possibility that Sri Lanka can satisfy their needs."