JAKARTA   On the morning of Jan. 21, a bright-red excavator dug its claws into a patch of earth on the western outskirts of Bandung as Indonesia's president, Joko Widodo, looked on with a smile. He was witnessing the birth of the nation's first high-speed railway, which will connect the mountainous city to Jakarta.

Another president -- of a company, not a country -- was also in attendance. Bintang Perbowo, head of state-owned contractor Wijaya Karya, or Wika, may have been watching things unfold with a little more anxiety than the politician. After all, his career may hinge on the project. 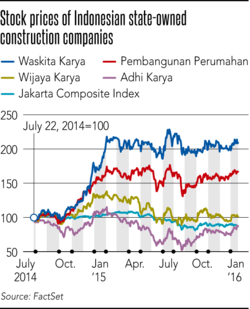 Wika is leading the consortium of Indonesian and Chinese state enterprises responsible for building the 142km railway by 2018. The project has made global headlines due to a fierce bidding war between Japan and China. Beijing got Jakarta's nod in September.

Wika's shares have been flat since Jan. 21. "It has been quite hard to determine whether this project will be profitable," said Bahana Securities analyst Bob Setiadi. "The details are still being discussed."

FALLING BEHIND   The sheer scale of the $5.5 billion work is unprecedented for Wika. But the deal comes as the company's earnings are faltering and rivals are growing.

Wika's market value, which stood at 17.2 trillion rupiah ($1.2 billion) as of Jan. 29, has swollen by 50% in the past two years. But the market caps of two of its state-owned competitors, Pembangunan Perumahan and Waskita Karya, have ballooned even faster, jumping 200% and 300%, respectively, in the same period -- making them far more valuable than Wika. Analysts reckon 2015 saw both companies overtake Wika in revenue and net profit as well.

The Jakarta-Bandung railway could be just what Wika needs to turn things around. "If the project is finished, which other contractor will have this kind of experience?" Perbowo asked. "It means we open up an opportunity for Wika going forward."

Wika expects to bag orders worth 17 trillion rupiah from the first phase alone, or roughly two-thirds of what it saw for all of last year. The project includes township developments around at least two of the four stops between Jakarta and Bandung. The project also gives Wika a chance to acquire valuable technology from joint venture partner China Railway Group, one of the world's biggest builders of high-speed railways. "There are many kinds of profits, not just money," Perbowo said. "It is people, too; our employees will perhaps be the only ones in Southeast Asia who possess the ability to make [high-speed railways]."

Wika has already built up experience in such places as Myanmar and Algeria. Gaining even more advanced skills should put it in a better position to tap the region's rising demand for infrastructure.

FACING HEADWINDS   The potential pitfalls are equally large. While the project has officially kicked off without major setbacks, the Transportation Ministry is now questioning some documents required for the final permit. Indonesia's infamous record of project delays has led many to believe that the completion goal of 2018 is unrealistic. "I think the target is too aggressive," said Setiadi of Bahana Securities. After budget-spending delays disappointed markets in 2015, Indonesia is redoubling efforts to eliminate bottlenecks for building infrastructure. But because it is prioritizing projects in less-developed areas, the government insists that state funds will not be used for the Jakarta-Bandung railway. China Development Bank is putting up 75% of the cost, but Wika, which owns 38% of the local joint venture, needs to shell out about $300 million from its own coffers to cover construction expenses. That is not far from the company's total equity as of September.

Wika is mulling several options to raise funds but is facing headwinds.

A proposal by the state-owned enterprises ministry to inject capital into the company -- thus giving it more financing options -- has been put on hold due to opposition from parliament, which has warned that proceeds might be misused for the high-speed railway. 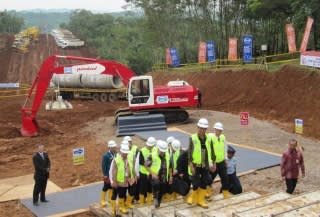 The company is considering moving ahead with a rights issue, which would dilute the government's stake from the current 65%, and selling shares in some of its subsidiaries through initial public offerings. "Even if the capital injection does not happen, we still have the rights issue scheme," a Wika representative told reporters at the groundbreaking ceremony on Jan. 21. "We also have the ability to borrow from banks."

Aditya Sastrawinata, an analyst at brokerage Mandiri Sekuritas, said, "The biggest downside of these plans is that they will receive substantially less capital than initially planned, thus they will be required to accommodate the shortfall by issuing bonds and cutting potential projects."

Regardless of the outcome, it is clear Wika cannot use a single rupiah from the government to directly finance the high-speed rail project. 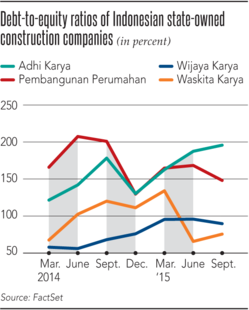 The representative said Wika plans to spend up to 10 trillion rupiah in 2016, up from last year's 1 trillion rupiah. The rail project only partly explains the surge; the company also has power plant and toll road projects in the works. While such undertakings improve Wika's long-term outlook, they give investors chills, from the perspective of short-term earnings.

But going light on capital spending could be a mistake for a company that has been suffering from weak earnings. For the nine months ended September 2015, Wika reported a drop in revenue and net profit due to weak demand for precast concrete and delays in property sales.

MERGERS AHEAD   While the anemic economy has been a big factor, tough competition has not helped. The most formidable domestic rival is Waskita, which received a capital injection from the government in 2015 that nearly tripled its equity to 8.4 trillion rupiah as of September. Flush with cash, Waskita has been able to invest heavily, including in areas where Wika had a strong foothold, such as precast concrete. The company was also appointed by the government to build a light-rail line in Palembang, South Sumatra, where the Asian Games will be held in 2018.

There are currently 119 state-owned companies in Indonesia. The government plans to whittle that number down through mergers of similar entities. On Jan. 29, local newspaper Bisnis Indonesia reported that Jakarta was looking to consolidate state-owned construction companies. Wika no doubt wants to survive the cull in order to soak up the huge infrastructure demand expected to result from Widodo's drive to modernize the archipelago.