HONG KONG -- Starbucks is making a new push to sell its own brand of tea in 16 Asian markets, after it started marketing Teavana in China last week.

The U.S.-based coffee chain announced on Monday that it would start selling Teavana tea in the Asia-Pacific region including Cambodia, Indonesia, Singapore, South Korea and Malaysia. On the menu: black tea with ruby grapefruit and honey, iced shaken hibiscus tea with pomegranate pearls -- a more complex recipe than what is being offered such as herbal tea and green tea lemonade in the U.S.

With a relatively sophisticated tea-drinking culture, "Asian consumers want more than just tea but the flavor and boldness," said Vera Wang, Starbucks's director for product line innovation in China and Asia Pacific in an interview on Monday. "We believe that the bold flavor and texture is really about the 'premiumization' of the experience and [being] different from traditional tea." 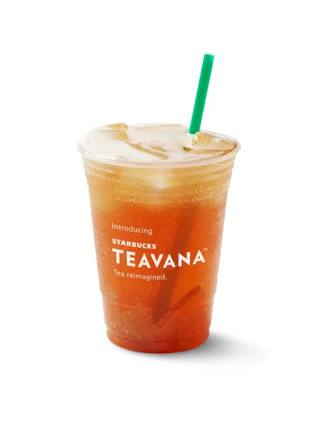 The launch is part of the company's ambition to diversify beyond coffee drinks and to grow its global tea business to $3 billion over the next five years. Last year, Starbucks saw its tea business in the U.S. expand by 12% on the year, with iced tea being the bestselling product, marking 29% growth in sales. The company did not reveal sales figures for other regions.

Starbucks sells iced tea and green tea drinks in some of its 6,200 stores in Asia but the latest move is a rebranding of this growing segment as Teavana, an Atlanta-based tea retailer it acquired for $620 million in 2012, and replacing its older brand Tazo.

"[Asian] consumers are used to constant changes and are constantly anticipating the next new thing," said Matthew Crabbe, research director for Asia Pacific at consultancy Mintel Group. "In China, we have already seen the growth and acceptance of coffee. New tea products and tastes, in a way, are just an extension of that."

While tea is the most consumed beverage after water in Asia, skepticism has grown over Starbucks' capacity to penetrate a region where tea-drinking is entrenched and part of local culture.

Some analysts say that strong regional preference for tea types and flavors such as pu'er in China and hojicha in Japan can be hard to change. Competition is also fierce with the revival of traditional teahouses and the rise of luxury brands like Singapore-based TWG Tea, which has a growing presence across the region.

"I am not too worried about the competition facing Starbucks that has a different positioning from TWG," Nicola Tang, CBRE's associate director of retail with a research focus on food and beverage. But with its aggressive shop opening plans in the region, whether Starbucks will be able to retain the "premiumness" of its tea and coffee brands remains in question.

"But all this could be part of its strategy -- with less emphasis on product quality but more on an affordable lifestyle experience that would otherwise not be available elsewhere. Starbucks just fills that gap," said Tang.