MUMBAI -- Moglix, a B2B e-commerce startup backed by industrialist Ratan Tata, aims to multiply revenue more than 20-fold to over $10 billion by 2025 following the rolling out of India's goods and services tax (GST) on July 1 -- a development expected to improve organized distribution of industrial products. 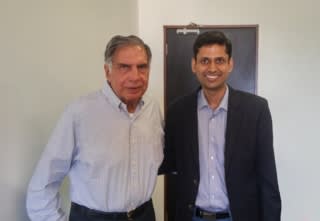 Rahul Garg, the founder of Moglix formerly with Google, sees India's manufacturing sector as essentially untapped in terms of digital procurement of goods and materials. The sector is worth over $300 billion, and accounts for about 17% of gross domestic product.

"Manufacturing is expected to grow to $1 trillion by 2025," Garg told the Nikkei Asian Review. "Moglix should become a company that powers 25% of manufacturing industry in the country as organized distribution becomes more powerful. We should be able to make a $250 billion impact."

With the government driving up manufacturing through its Make in India and Digital India campaigns, the premise is that digital procurement will become a necessity for manufacturers.

Global manufacturers have already taken onboard procurement and sales technologies, but India is well behind the curve and inefficient, according to Garg. He reckons only about 1% of Indian manufacturers are up to speed, and that GST will promote the catchup.

Headquartered in Singapore, Moglix was founded in August 2015. It serves over 50,000 small and medium-sized enterprises in India, and over 200 major manufacturers in India, China, and other parts of Asia. Clients include GlaxoSmithKline Pharmaceuticals, Havells India, India Forge, Kirloskar Group, Lumax Industries, and some Tata Group companies.

Moglix platforms enable companies and individuals to place bulk purchase orders and fulfill deliveries with the help of logistics partners. It provides cloud-based software as a service (SAAS) that third parties are able to make available to their clients for convenience and supply chain efficiencies.

Backed by venture capitalists like Jungle Ventures and Accel Partners, Moglix is one of the very few technology firms to have embarked on B2B development in India. U.S.-based AmazonBusiness.in has a small operation in the south Indian cities of Bangalore and Mysore, and China's Alibaba is reported to have entry plans. Moglix expects to enjoy first-mover advantage. Local startups hoping to do business helping corporates achieve GST compliance include AutoMaxis, ClearTax, and Zoho.

Last week, Moglix closed its series B round of funding for $12 million from International Finance Corporation and Rocketship.vc, along with existing investors which include Accel Partners, Jungle Ventures, and Venture Highway.

Moglix will use the funds to set up in three more undisclosed cities. It is already present in Chennai, Delhi, and Pune. The company also wants to promote its new green goods and service tax software. "The technology is to aid manufacturing units file indirect taxes seamlessly, while maintaining a close vigil on the 100% reconcilability of the entire value chain," said Garg. "The technology is placed to gear-up enterprises for the upcoming GST compliance challenge."

Green GST solutions will be offered free for 30 days to companies with annual turnover of under $4 million, with subsidies available thereafter for up to 2,400 invoices annually.