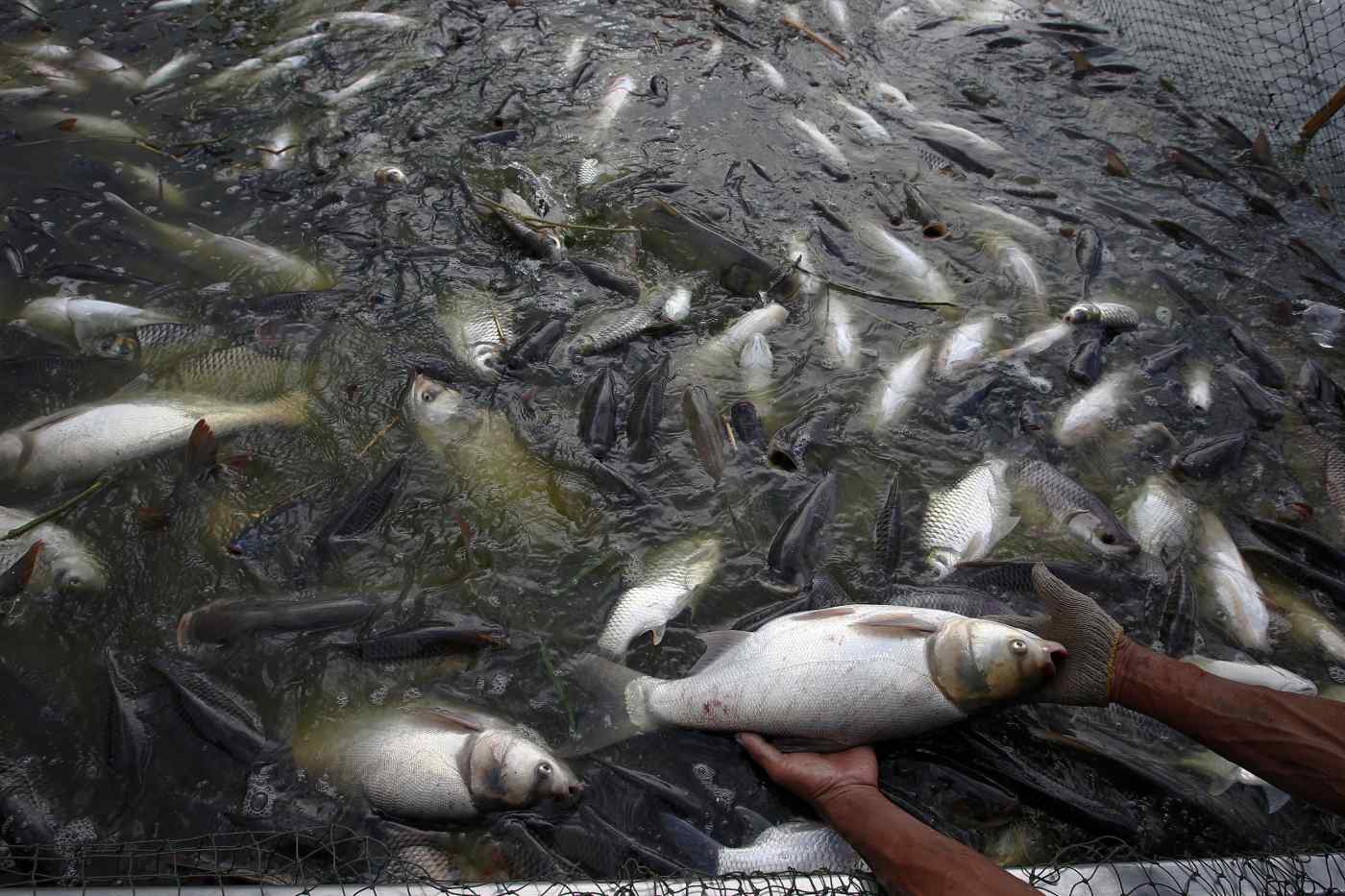 JAKARTA It was the Islamic holy month of Ramadan in 2007. Gibran El Farizy, a student at the Bandung Institute of Technology in West Java in Indonesia, was starving.

Farizy's parents were late sending his monthly allowance of 600,000 rupiah (about $45 at the current exchange rate), and he barely had enough money to buy the cheap soft drink he wanted to break his fast with. For three days, he relied on a few dates and water to break the fast, and just water before dawn prior to resuming his fast the next day. He eventually received the money from his parents, but his experience, along with an article he read in a local paper about children dying of starvation, inspired him to try to tackle the problem of world hunger.

HANDS-FREE FARMING The company's device allows fish and shrimp farmers to schedule feeding times using a smartphone app. Say a farmer wants to release 150 grams of feed at 7 a.m., 50 grams at 3 p.m. and 100 grams at 11 p.m. This information is plugged into the app, and the motorized feeder disperses the appropriate amount of food pellets evenly across the pond at the designated times.

The feeder comes in two sizes and can cover ponds of up to 100 sq. meters. The smaller one, with a 12kg feed container, costs 6.7 million rupiah ($495), while the larger 65kg container version costs 7.9 million rupiah, including the price of the monitoring software. EFishery also offers a rental option for 300,000 rupiah a month.

"[The autofeeder] is good," said Petrus Rumambi Gumantio, a low-ranking civil servant in Lampung Province who began farming catfish as a side job seven years ago. He uses six small ponds in his backyard to raise the fish, a process he said used to take three or four months. Since he began using eFishery's feeder less than a year ago, Gumantio said he has been able to use less feed -- 700kg from the previous 1 ton -- and that the catfish can now be harvested in a shorter amount of time.

"I only had to arrange [the feeding schedule] using a smartphone once, and now I don't have to rush home from the office every time to feed [the fish]," he said. 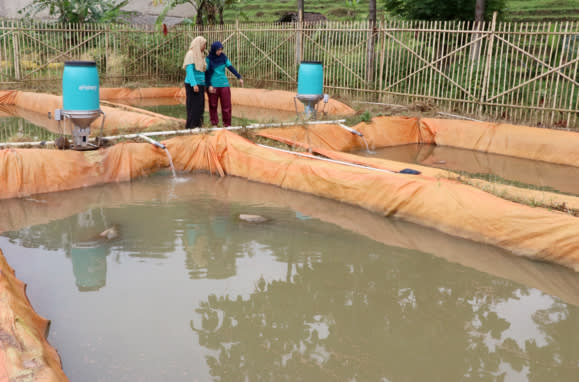 Employees at ​eFishery test its products at a research center in Bandung. (Photo by Shinya Sawai)

The company is now developing an in-pond sensor to track how hungry fish are by monitoring their movements and the ripples in the water. According to eFishery, fish swim "more aggressively" when they are hungry, creating more waves. The sensor, which the company hopes to release this year, will be activated during feeding times and automatically stop the feeding process if the fish are no longer hungry.

The company hopes that its technology will eventually help fish farmers optimize their breeding and rearing regimens. "We call eFishery the IoT for shrimp and fish farmers," Farizy said, using the acronym for the internet of things.

Farizy, 27 years old, came up with the idea for a feeding system after encountering problems with his own small catfish farming business, which he ran during his second year of college. "The biggest problem that happened to me ... [was] actually the feeding cost. That is a very simple problem, but no one [could] solve it."

According to eFishery, feeding accounts for 70-80% of the total cost of aquaculture. Moreover, it is often done by unskilled workers, which in many cases leads to overfeeding or uneven distribution. This means that larger, more aggressive fish tend to get most of the food while the rest go hungry.

"There was no technology to enable monitoring. That makes the business less profitable -- uncontrollable -- because your biggest cost is just spread on the water," Farizy said. "The idea is to solve the main problem, to make the feeding more efficient and controllable." Efishery says its system can reduce the cost of feeding by up to 21% and improve the growth of the fish because the water is less polluted by overfeeding.

FISHING FOR BUYERS It has not been entirely smooth sailing for the startup. At first, Farizy approached farm managers at big agribusiness companies, thinking that if large companies used the product, it would then be easier for eFishery to sell to small-scale fish farmers. But, as is often the case with startups lacking a track record, he was repeatedly turned away. He persevered, however, building up contacts and perfecting his product. The company says it now has more than 500 customers raising freshwater fish and shrimp in Indonesia, mostly in West Java and Lampung provinces.

The company declined to disclose its financial data, but it has raised more than $1.2 million in funding from the likes of Aqua-Spark, a Dutch aquaculture investment fund, and Indonesian venture capital company Ideosource, according to online database Crunchbase.

The mission of eFishery -- to make fish farming more efficient -- is becoming more relevant by the day. The United Nations projects the world's population will reach nearly 10 billion by 2050, up from 7 billion today. To feed everyone, it is estimated the world will need to double food production, and fish are undeniably a valuable source of protein.

The emphasis on aquaculture in particular comes in response to overfishing. According to the U.N.'s Food and Agriculture Organization, 31.4% of world marine fish stocks were overfished -- defined as being harvested at biologically unsustainable levels -- in 2013. A further 58.1% were fully fished.

Fish farming is also more economical than other types of animal husbandry, such as raising cattle, poultry or pigs. One reason is that land is scarce, and clearing forests to make more available is not always feasible or sustainable.

Fish are also more efficient at turning feed into meat. The FAO calculates that a chicken requires 2.5kg of feed to gain 1kg, while pigs require 5kg and cattle 10kg in a typical U.S. production system. Nile tilapia, a favorite fish in Southeast Asia, only requires around 1kg to 2kg.

"This is an important issue, as well as water scarcity and land scarcity," Farizy said. "If we can produce a protein source that is affordable and easy and needs less resources, that will be the future we want to pursue." 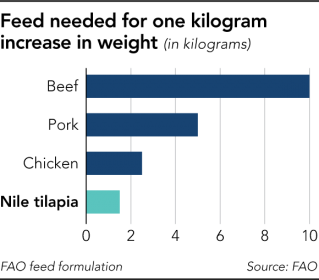 The company says its own research has shown that after a fish farm has deployed eFishery's automatic feeder, the feed conversion ratio -- that is, the amount of feed provided versus the amount of weight the fish gained -- was reduced to 1.14 compared with 1.39 for the traditional manual method of feeding. That translates to a 12% lower production cost per kilogram and ultimately a 92% increase in profits, according to the company.

According to the FAO, Asians consumed 99 million tons of fish in 2013, or about 70% of the 140 million tons that were available for human consumption. Asia is also the center of aquaculture: The Association of Southeast Asian Nations accounted for 22.7% of global aquaculture production in 2015, and China 58%.

PRIME LOCATION There are competitors providing similar solutions, such as Eruvaka Technologies in India, but eFishery's proximity to both of these huge markets gives it an advantage, in terms of both access and understanding their needs. Farizy said the company will focus on Indonesia, Thailand, Vietnam, Bangladesh, China and India over the next three years, as they are major exporters of aquaculture products, as well as big consumers. The company's office in Bandung (Photo by Shinya Sawai)

The startup has received numerous honors, including the Indonesia ICT award from the country's Ministry of Communication and Informatics and, most recently, the Tech4Farmers Challenge from the U.S. Agency for International Development. It was also a part of Google's Launchpad Accelerator program, which focuses on startups in emerging markets.

Although eFishery's goal is to "decrease hunger in the world," according to Farizy, he thinks it can achieve much more. As with other internet of things companies, he thinks the real value of his business will be in the statistics it gathers.

"EFishery is a channel to getting data," he said. "The data would be the most interesting part of the business because from the data, we can do a lot. We can do prediction. We can connect farmers to the buyer. We can connect the farmers to manufacturers, and we can even build some kind of credit scores."

He noted that one of the difficulties fish farmers face is a lack of credit because aquaculture in its current form is an unpredictable business. "There is a lot of potential for things to go south," Farizy said. He envisions his company using the credit scores it compiles to help banks and insurers provide loans and insurance products for fish farmers.

"We will be the only company that will get the feeding data, the production data, fish behavior data. And there is no other company that can do that," he said. "That will be our advantage ... to hold the market share and maintain our market leadership. We want to be a platform for fish farmers ... the Google of aquaculture."