TOKYO -- Startups in China are experiencing a rebound in venture capital funding as the coronavirus crisis in the country wanes faster than in other regions, according to a recent report published by Startup Genome.

As the first country hit by COVID-19, China saw a drop of over 50% in funding of Series A or later rounds in January and February compared to December of last year, the report said. The pandemic dealt it a significant blow given that global venture capital funding dropped by 20% over the same time period.

More recent data, however, shows that China is experiencing a bounce in capital funding ahead of the rest of the world.

According to Startup Genome, which advises on innovation policy and conducts research, the number of Series A+ deals in China doubled in March from February, although the figure remains below the levels before the crisis. Nevertheless, the uptick is "promising," Arnobio Morelix, Startup Genome's chief innovation officer, told Nikkei Asian Review.

That is partly due to China containing the virus earlier than other places, said Asei Ito, associate professor at the University of Tokyo. In March, the daily number of new coronavirus cases reported in the country was already going down while that for Europe and the U.S. was rapidly increasing. "As China recovers from the economic shock of the virus, some investors restarted investing relatively large amounts of money in startup companies," Ito said.

Deal Street Asia reported on Wednesday that Beijing-based AI company Lingxi has raised $6.2 million in a Series A round led by TikTok's parent company ByteDance. In April, ByteDance also led a $14 million Series B round for China-based cleaning robot maker Narwal Robotics.

"As many people stay home, startups offering services for stay-at-home consumption are more likely to raise funds now," Ito told Nikkei, stressing that Chinese digital platform companies such as Tencent and ByteDance play an important role. "These companies' core businesses are booming amid the coronavirus crisis and they are actively investing in startup companies to further expand," Ito said.

Morelix of Startup Genome, meanwhile, pointed out that there is some variation in how the pandemic's impact has unfolded.

"The crisis hurts most sectors and industries, but it does not do so uniformly," Morelix said, explaining that companies like Keep that are business to consumer in orientation are about three times more likely to experience growth than those based on a business-to-business model.

But the rest of Asia and other parts of the world are far from recovery: The number of Series A+ deals has been in a downward trend since December in Asia, the United States, and Europe. 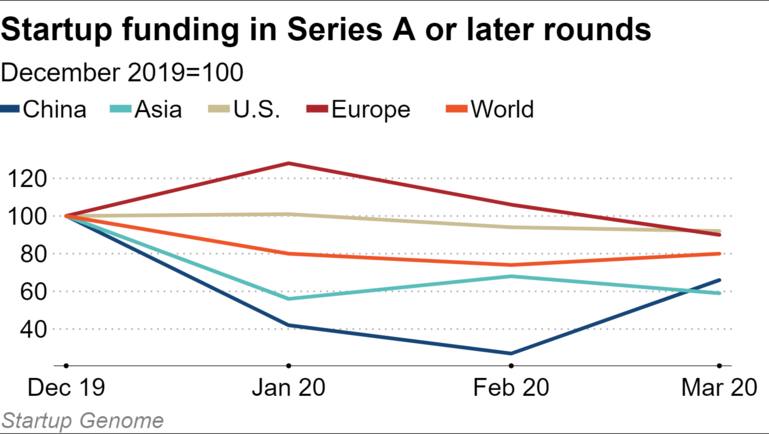 In particular, non-China Asia saw a 40% drop in funding deals in March compared to December, while they fell 8% in the U.S. and 10% in Europe. "Even in places where the spread of the virus might be relatively under control, economic pressures like lower capital availability and lower consumer demand might be present," Morelix said.

With no clear end in sight to the pandemic, investors appear to be carefully choosing where to put their money. But many startup companies are facing severe cash flow problems and if they do not raise additional funds "they will die," Startup Genome warned in the report.

Indeed, few startups have an abundance of cash. According to a Startup Genome survey, 4 out of every 10 startups globally have 3 months or less of cash runway.

Morelix says government support for startup companies is essential, stressing that tech companies will be "key" to economic recovery as they contribute to most of the new job creation.

"Tech companies are the engine of productivity growth by creating and taking to market innovations that make the economy more dynamic," he said. "Supporting startups helps preserve an economy's innovation capacity, and this is particularly relevant as our economic interactions become increasingly digital."