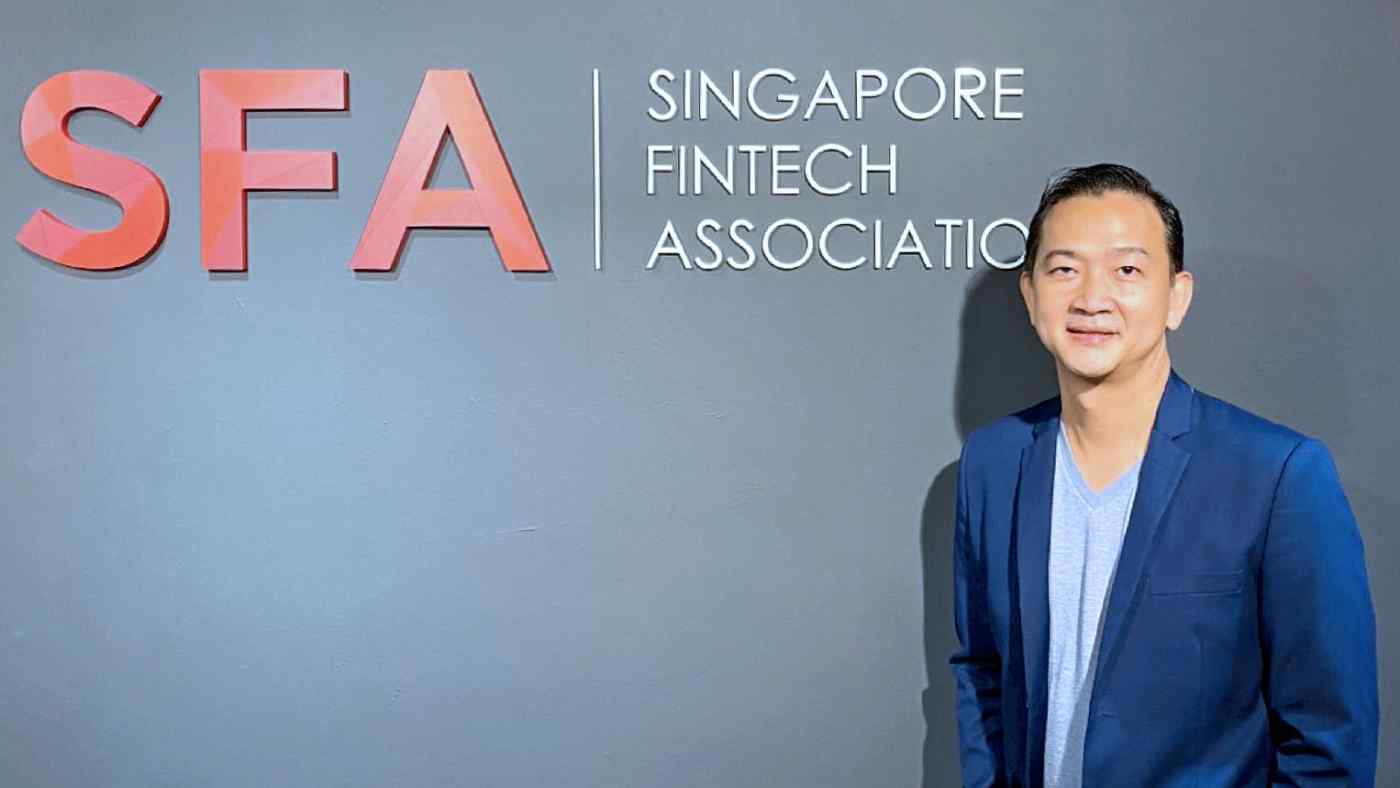 SINGAPORE -- Singapore is striving to enhance its position as Southeast Asia's financial center particularly for financial technology companies, luring promising entrepreneurs from abroad with such programs as a special visa status and monetary support.

The island city-state has become a hub for business-to-business fintech companies seeking to operate globally, with their number increasing by 70% over the past year to more than 1,000. Singapore's experience could serve as a model for other cities wishing to become international financial centers.

Rajith Shaji, an Indian-born entrepreneur who has built his career at fintech companies at home and abroad, executed a long-planned idea to settle in Singapore in January. He founded Volopay, which develops systems to streamline the settlement of expenses at small- and mid-sized businesses. A little over six months since it was established, the startup had already concluded contracts with about 60 companies.

As it prepares to expand into Australia soon, Volopay is also looking at entering the Indonesian and Philippine markets next year.

Shaji said his business would not have taken off as smoothly in India as it has in Singapore because it is difficult for a newly founded startup to raise funds in his home country. Noting that the fintech ecosystem in India is not as sophisticated as it is in Singapore, Shaji said he carried out his relocation plan because Singapore, which is open to startups, was the best place to launch his business.

Ravi Menon, managing director of the Monetary Authority of Singapore, said: "We now have an estimated 1,000 fintech firms in Singapore, compared to 600 mid-last year."

There were only 50 fintech companies in Singapore five years ago, but the number has jumped, with 400 emerging just in the past year, according to MAS.

Although a simple comparison is difficult due to differences by country in the definition of fintech companies, Japan is estimated to have about 500 such companies. A survey conducted by Ernst & Young in 2018 found that nearly 40% of fintech companies in the Association of Southeast Asian Nations were based in Singapore.

Volopay is just one of the fintechs that have flocked to Singapore despite the continuing spread of COVID-19, and it possesses three features that are common to many startups based in the city-state.

As in Shaji's case, foreign entrepreneurs who have no previous business base in Singapore can readily start new businesses there because the city-state has well-developed public and private systems to accept them, as well as extensive support networks.

Shaji took a program offered by Antler, a Singapore-based venture business accelerator teaching management know-how to entrepreneurs, and received a capital injection of $100,000. The potential to secure initial working capital is not the sole benefit of participating in programs that are offered by accelerators in cooperation with the government. In addition, by taking the programs, foreign entrepreneurs can readily obtain the EntrePass work visa, allowing them to stay in Singapore and start new businesses.

Shaji is just one of many foreign entrepreneurs setting up fintech companies there. 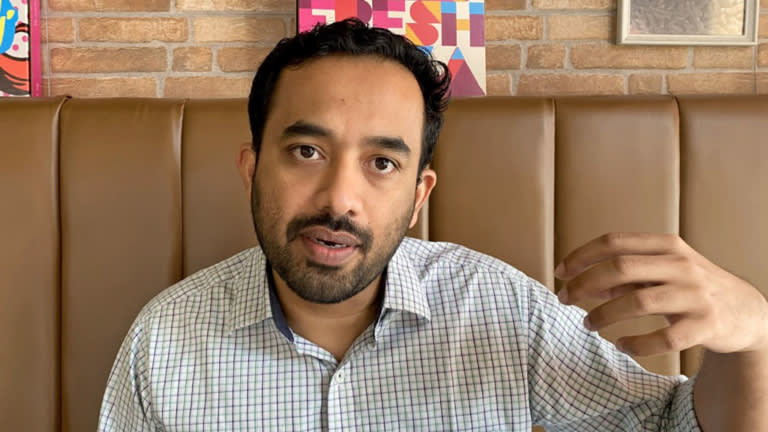 Rajith Shaji, an Indian-born entrepreneur who immigrated to Singapore in January, has set up fintech company Volopay. (Photo by Takashi Nakano)

If successful fintech entrepreneurs expand their operations in Singapore, they will help enlarge the financial industry there and create jobs. In this way, the EntrePass has become one of the lynchpins of Singapore's fintech ecosystem.

The second common feature of many Singapore fintech startups is that some 80% of them are engaged in B2B. While more than 100 domestic and foreign banks have operations in Singapore, many multinational companies with head office functions in the Asia-Pacific regions have bases in the city-state. This gives Singapore huge potential to be a hub for wide-ranging services, such as analysis of financial big data and cybercrime prevention.

The large presence of B2B services is inevitable because Singapore's population of just 5.7 million means the market for business-to-consumer services remains small.

That is in stark contrast to other Southeast Asian nations, where fintech services focus on the use of electronic money and online lending for consumers.

"What I had realized is that all companies that were selling software to the banks in the Asia-Pacific region were primarily coming from Europe and from North America," said Olivier Berthier, chief executive and co-founder of Moneythor, which develops software for banks. "One of the things that I had identified is that if we would start a company here in Singapore, we would have competitive advantage against all those other companies that are based far away."

Thirdly, about 80% of Singapore-based fintech companies operate beyond the city-state. They usually seek growth opportunities across Asia, while enjoying Singapore's advantages, including the ease of hiring English-speaking talent and raising funds.

MatchMove is a startup that provides a digital payment platform in five countries, including India and Vietnam.

Founder and CEO Shailesh Naik said Singapore was the best place to run a business, considering it can respond swiftly, clearly and efficiently to changing regulation. Having a headquarters in Singapore, a place known for its transparency, was also a plus in winning confidence when doing business in other countries, he added. Shailesh Naik is a founder and CEO of Singapore-based digital payment platform operator MatchMove, which operates in five countries, including India and Vietnam.(Photo by Takashi Nakano)

The Monetary Authority of Singapore in August announced that it would commit 250 million Singapore dollars($184 million) over the next three years to accelerate technology and innovation-driven growth in the financial sector. It will double the maximum funding from S$200,000 to S$400,000 under a 'Proof-of-Concept Grant', which is aimed at promoting greater experimentation in the financial sector and accelerating the development of nascent innovative technologies, by supporting early stage development of novel solutions.

"MAS is determined that the fintech ecosystem that we have built rides through this crisis not only intact but also stronger," said its managing director Menon.

But there are challenges, too. The number of Singapore-based fintech companies has increased rapidly in recent years, but there are no startups equivalent to unicorns -- companies valued at more than $1 billion. The size of each company's business and fundraising is also relatively small.

Singapore-based fintech companies raised $190 million in funds in the first half of this year, down 58% from a year ago, according to a survey conducted by consultancy Accenture. That is about one-sixtieth of that in the U.S., which accounts for half of the funds raised by fintech companies around the world, and one-twelfth that of China, the biggest fintech hub in Asia.

Rival Asian financial center Hong Kong has been shaken this year by the enforcement of the Hong Kong national security law, which reduces the city's autonomy from Beijing and has provided Singapore with a good opportunity to attract financial institutions, personnel and new investment. Singapore has an ambition to cement its position as a hub for financial innovation by using such tailwinds to attract and foster promising fintech companies.

There is something Japan, too, can learn from Singapore's method of building an ecosystem for fintech with a focus on B2B. That is because the Tokyo market, where major domestic and foreign financial institutions have operations, has great potential for fintech growth in the B2B sector.

Moneythor broke into the Japanese market by establishing a subsidiary in Tokyo in June 2019.

It was prompted to do so by FinTech Business Camp Tokyo. During the fintech support event organized by the Tokyo metropolitan government in 2017, the company held talks with a series of Japanese financial institutions and had positive responses.

If such collaborative opportunities increase, an increasing number of fintechs could seek opportunities in the Japanese market, as they have in Singapore. This would also have the benefit of boosting Japan's financial industry, which is lagging behind in the use of up-to-date information technology.