TOKYO -- A Cambodian startup has produced an affordable laptop geared for students and businesses, part of a new crop of personal computers in Asian emerging markets that seem to have skipped directly to smartphones.

Asian PC brands have long been associated with Japan, mainland China and Taiwan, but newcomers are a diverse group including players from the Philippines and Indonesia. The latest entrant is Cambodia's Koompi.

"People are going to have different devices," Koompi founder Rithy Thul said, adding that with smartphones, "productivity is still low compared to a laptop."

Koompi, which means book of knowledge in Khmer, sells its namesake laptop for $369. To keep the price down, the computer is powered by a free, open-source Linux operating system, which saves on the licensing fees that go with Microsoft Windows or other software.

The startup has received about 1,000 orders, including for test runs in local schools, since the computer's October debut in Phnom Penh. Most of the sales are online, but the company also partners with schools and other organizations to distribute the laptops. Koompi, which means book of knowledge in Khmer, sells its namesake laptop for $369.

Equipped with free software including WPS Office Suite and graphics editor Gimp, Koompi is intended as a quality laptop for everyone, even in a developing country like Cambodia where the majority of people ages 13 to 25 does not own a computer, Thul said.

The computer is assembled in Shenzhen, but Thul wants to build it domestically by 2020, as he seeks to open Cambodia's first PC assembly factory. Thul aims to sell the laptop to 450,000 Cambodians in three years, or 10% of country's population in the 13-25 age group.

In emerging Asian-Pacific consumer markets including India and Indonesia, PC shipments increased by 10.7% on the year for the third quarter of 2018, research and advisory firm Gartner estimates.

Other brands from the region include the Philippines' Starmobile, founded in 2011, and  Indonesia's Axioo, which sells Intel-based PCs.

Cambodia appears to offer room for growth. Only 10% of households owned a computer in 2016, according to the International Telecommunication Union, a United Nations agency. Yet about half of the Southeast Asian country's population has internet access, marketing agency We Are Social says.

While smartphone remains the primary device for going online in Southeast Asia, "there would be certain reasons for buying PCs such as requirements for attending universities or getting a new job," said Mikako Kitagawa, a Gartner senior principal analyst. 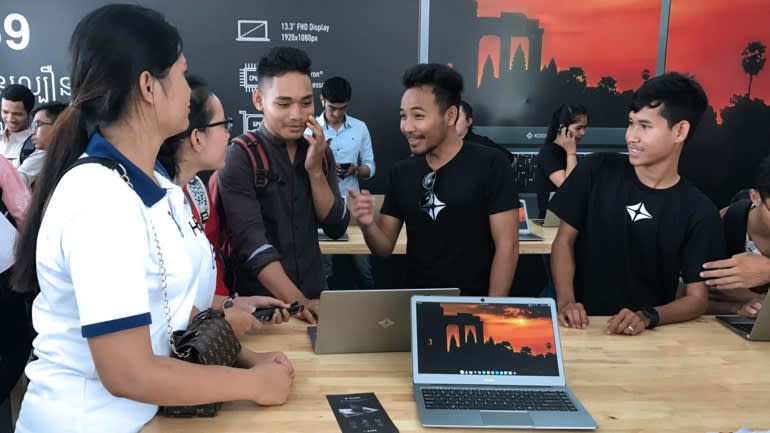 The share of web traffic via laptops and desktops has climbed 22% in 2018, while access by mobile phones decreased by 17%.

Koompi also plans to expand sales across Asia starting next year, having already received orders from Japan, Myanmar, Indonesia and Dubai. Thul also hopes to reach Brunei and the Philippines.

The startup found a Japanese partner to set up an office in Tokyo. Yuta Kikuchi, president of IT firm mum Consulting, is in charge of Japanese sales. Kikuchi said he plans to obtain about 50 million yen ($443,000) through crowd funding.

But Koompi is intended primarily for developing countries.

Thul first touched a computer in 2005, after he moved from the countryside to Phnom Penh. He used online courses to build Koompi with his brother, and earned some money as an early bitcoin investor.

Thul, well known in Cambodia's startup scene, also is a founder of co-working space operator SmallWorld Ventures. After cycling around Cambodia and working as a real estate consultant, he co-founded SmallWorld out of a Facebook group for local young entrepreneurs in 2011.

The global PC market remains dominated by a limited number of players, notably Lenovo, Hewlett-Packard and Dell. Asian companies have withdrawn from the PC market in the past.

Though any non-Windows system faces difficulty entering the business PC market, an alternative operating system and brands have a chance if they find a niche market, Gartner's Kitagawa said.

"Koompi is launched at the right time, when more people want to use PCs," Thul said.