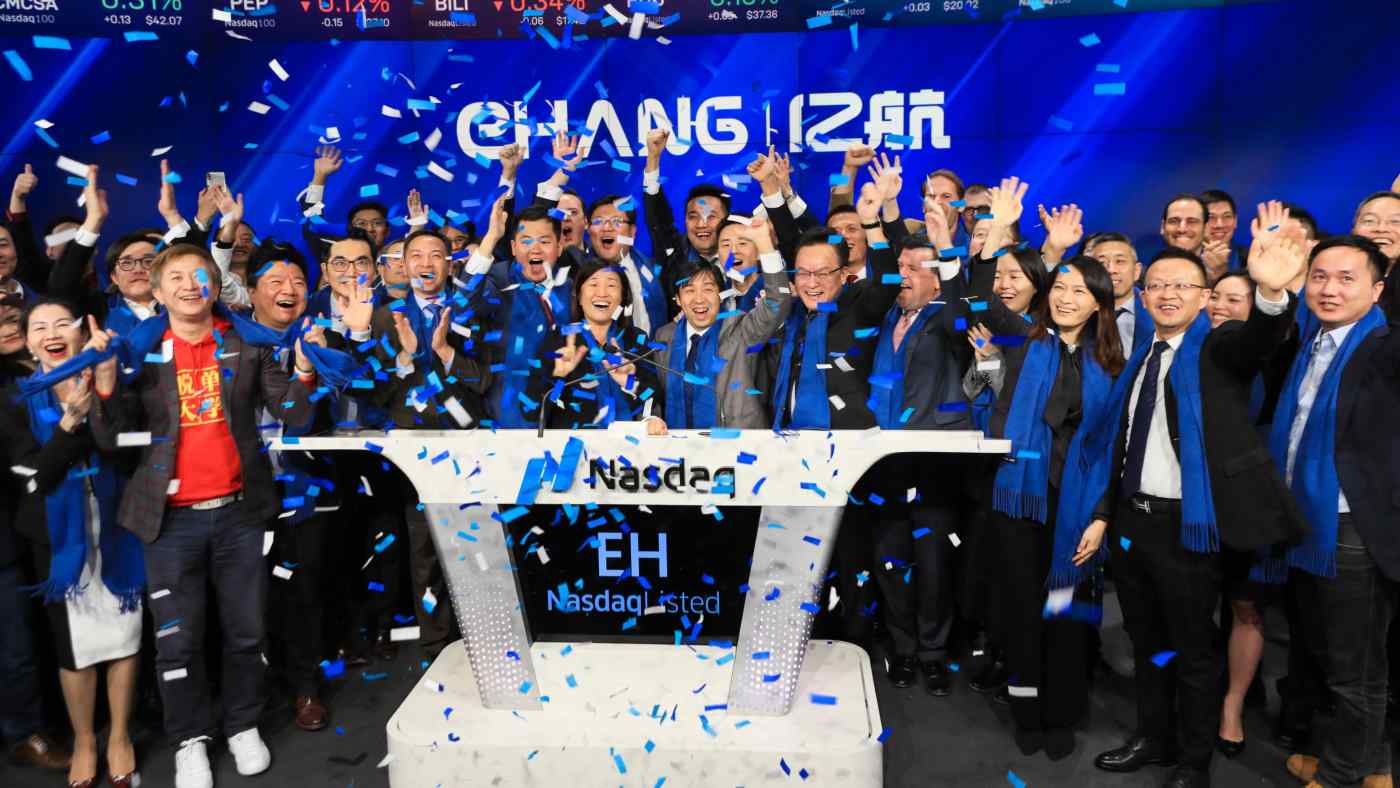 The company began trading on the Nasdaq Global Market under the symbol "EH." It opened at $12.55 after pricing its shares at $12.50, the bottom of its expected range.

"EHang has never been a company that is short of money, and we don't splash the money either," founder and Chairman Hu Huazhi told reporters ahead of the official start of its U.S. trading. Raising funds was not the primary goal, he said. The real purpose was to "increase the company's transparency" and boost its international reputation, as EHang will be watched by the world as a public company, Hu said.

Hu claimed that EHang has recorded a net increase in cash since late 2018, and that its losses were due to heavy investment on research.

In its initial public offering, the company raised $40 million by offering 3.2 million American depositary shares representing 6.4 million Class A ordinary shares at $12.50 each.

EHang filed its registration statement with the U.S. Securities and Exchange Commission in late October.

Morgan Stanley, Tiger Brokers, New York-based investment bank Needham and boutique investment banking firm Prime Number Capital are the underwriters. They have been granted 30 days to purchase up to an additional 480,000 ADSs at the IPO price in order to cover overallotments, a prospectus filed Thursday shows. EHang 216 minihelicopters on display at the Heli Tiande Center in Guangzhou on its opening day Nov. 30. (Photo courtesy of EHang)

Founded in 2014, EHang is based in the southern Chinese city of Guangzhou. It functions as an autonomous aerial vehicle technology platform company for the development, manufacture and sale of passenger drones as well as supporting systems and infrastructure. The company provides passenger transportation, logistics, smart-city management and aerial media solutions.

EHang has obtained approval from Chinese regulators to set up a commercial air mobility service in Guangzhou. Two units of its EHang 216 passenger-grade AAVs performed simultaneous flight demos there in late November, vertically taking off from and landing at Heli Tiande Center on its opening day, according to the company.

"Most disputes between two countries were related to information products that might affect people's privacy," he said. "As a vehicle provider, we are not subject to such concerns."

But EHang is concerned about the regulatory processes both countries. Its AAVs could be subject to "an uncertain or lengthy approval process" as regulations continue to evolve, the prospectus said. American regulators could be especially tough.

Chinese-made drones have raised security concerns in the U.S. before. The Cybersecurity and Infrastructure Security Agency, under the Department of Homeland Security, said in May that it had released an industry alert "providing organizations with information related to the inherit risks associated with using [drone] technology manufactured in China and measures to reduce such risk." Nearly 80% of drones sold in North America are said to be made by Shenzhen-based DJI.

EHang has already shipped some units to the U.S. and is applying for relevant permits with the Federal Aviation Administration to run test flights there, co-founder and Chief Marketing Officer Derrick Xiong told the Nikkei Asian Review.

"We have already done a lot of flights, not only in China, [also at] a lot of sites in Austria, Netherlands, Dubai," Xiong said.

"So I think those experiences will help the U.S. regulator to get more familiar with what we are doing," he said.