SHANGHAI/TOKYO -- Chinese startups are facing an increasingly tough financing landscape after data showed a slide in the amount raised last year as investors shift to backing companies with track records.

Chinese startups raised 774.1 billion yuan ($112 billion) in 2019, down nearly 36% from a year ago, according to Jingdata, a unit of an online Chinese startup information service 36Kr.

"We have approached more than 10 companies, but none of them showed interest," the chief executive of a startup in unmanned driving technology told Nikkei. The entrepreneur had hoped that his company would reach a valuation of 1 billion yuan, but has scaled back his ambitions to 120 million yuan.

Data showed that investors became more selective and were choosing to pump large amounts into startups that already realized steady growth in cloud computing and artificial intelligence technologies, moving away from those in nascent stages of development.

In part, Chinese investors became more selective as a stock market tumble in 2018 led to a credit crunch for some of them. Tighter controls on private funds implemented by the government of President Xi Jinping to reduce financial risk also put a lid on fundraising. 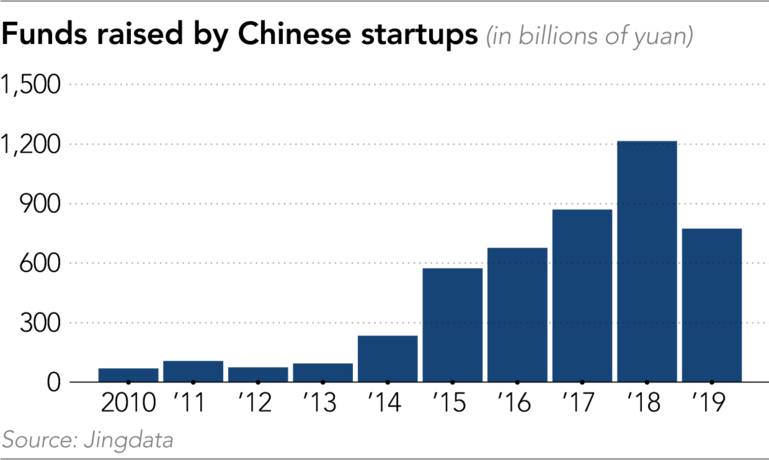 Furthermore, as startups' valuations increased, their shares have also become expensive. Yet, investment funds that have faced difficulties in fundraising have become pickier, according to Yang Rong, a partner at Guangzhou Black Hole Capital.

Investor nerves have also been rattled by the slump in the share prices of U.S. ride-hailing company Uber Technologies and Chinese smartphone maker Xiaomi after listing. The failed float of office-sharing startup WeWork has also shaken investor psyche.

Among those that have been successful in fundraising is data center operator Tenglong Holding Group. The company received 26 billion yuan in funds in late November. Jing Yu, executive vice president, said Tenglong is planning to build more than 10 data centers. The data from Jingdata includes investment by tech giants such as Alibaba Group Holding and Tencent Holdings into subsidiaries, as well as additional fundraising by those that already listed. Cases in which companies successfully raised funds plunged to 4,282 from 10,044 in the prior year, but the average amount raised surged to 180 million yuan from 120 million yuan.

The field has become more polarized, and the continued growth in the number of unicorns, or companies valued at $1 billion or more, is a clear sign that the winners have momentum. According to U.S. research company CB Insights,16 companies in China became unicorns last year, almost halving from 2018. China is still home to more than 100 unicorns, second only to the U.S.

36Kr President Feng Dagang said that investors will now shift their focus to earnings data from corporate value. Fundraising by corporate service providers, medical and consumer products companies is likely to increase this year, he added.